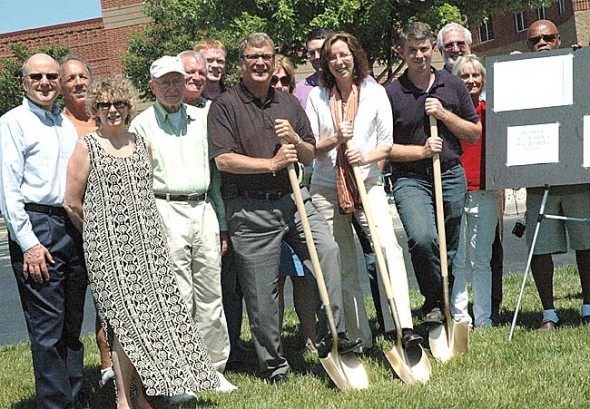 Last Friday, June 8, a ground-breaking ceremony was held on the property of the Center for Business and Education, or CBE, for the center’s first phase of construction. That project, the creation of an intersection of Dayton-Yellow Springs Road with the CBE’s internal roadway, to be called Gateway Drive, involves road widening and the creation of new turn lanes. The project, for which the Village has hired A&B Asphalt Corporation, is funded by a grant from the Ohio Public Works Commission.

Developed by the nonprofit community improvement corporation Community Resources, the CBE infrastructure will be funded by about $1 million in grants, including a water and sewer grant from the US Army Corps of Engineers, and a roadway and drainage grant from the Ohio Department of Transportation, or ODOT.

The Village of Yellow Springs has provided project management, financial and fiduciary agency for the administration of the grants and plan development. Design and engineering plans are being developed by Jacobs Engineering Group, Cincinnati. The design work for the infrastructure is nearly complete, according to a release from Village Manager Laura Curliss, and infrastructure construction could begin in late 2012 or early 2012.

At the groundbreaking ceremony, Curliss thanked partners and contributors to the CBE project, including former and current Village Council members; current and past board members of Community Resources; Greene County Engineer Bob Geyer; the Miami Township Trustees; former U.S. Representative Dave Hobson; former Village Manager Rob Hillard; Antioch University and Antioch University Midwest, for becoming the center’s anchor institution; the US Army Corps of Engineers; the Ohio Public Works Commission; FHWA/ODOT/MVRPC; and Vernay and CEO Frank Welling for selling the land, along with attorney Sharen Neuhardt for helping with the sale.