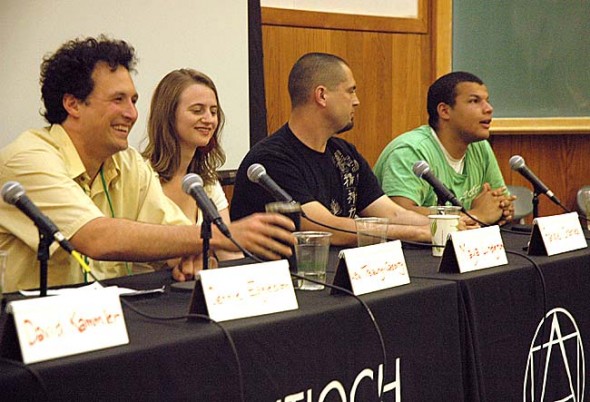 At the “Antioch Today” panel at this weekend’s Antioch College alumni reunion, students, staff and faculty reflected on the trials and triumphs of college life in the middle of the revived school’s first academic year. From left, are Assistant Professor of Philosophy Lewis Trelawny-Cassity, student Maya Lundgren, Resident Life Manager Randle Charles and student Guy Matthews. (Photo by Megan Bachman)

No such thing as a typical day

At last weekend’s Antioch College reunion, students, staff and faculty painted a picture of current college life for Antiochians past. There alumni and others heard how a new generation of Antiochians, now near the end of Antioch’s first academic year since the college temporarily closed in 2008, has dealt with the Herculean task of reviving a college.

“You can’t really prepare yourself to come to a college you’re supposed to help create,” said panelist Maya Lund­gren, a member of the college’s first class of 33 students. Lundgren said that the passion that so many people have for Antioch, including its supportive alumni, has helped in tackling the hard work at hand. Shared goals among students, staff and faculty have also helped, she said.

“If we didn’t [share the same goals] we wouldn’t have made it this far,” Lundgren said.

Dennie Eagleson, a longtime former faculty member recently rehired as creative director, said the college’s success can in large part be attributed to the students who accepted the risk of attending a non-accredited institution and have stepped up.

“We’re asking for so much maturity from college students to be that good,” Eagleson said. This first class of students has, since the college reopened last fall, helped to “push the process forward,” all the while staying in good humor and not “dumping their stress,” Eagleson said.

A day in the life

Asked to describe a typical day at Antioch College, student Guy Matthews had to admit that there is no such thing. After morning class he goes to work at the admissions office, followed by evening governance task force meetings and watching Japanese cartoons as part of the Anime group he created. Lundgren splits her time between work at Planned Parenthood in Dayton, Spanish homework from an online class, journaling in her work portfolio, and taking part in the governance task force.

Lew Trelawny-Cassity, assistant professor of philosophy, is a member of six different committees, which he said is an exciting way to be a part of college life, and in between meetings and classes tries to eat meals with students and beat fellow professor David Kammler in Ping-Pong. To Trelawny-Cassity, the college feels “like a family,” he said.

Trelawny-Cassity said that so far his contribution to Antioch has been his positive attitude and work as a committee member. One committee that he is particularly proud of is the Sustainability Committee, which created an on-campus farm to produce food for the kitchen.

“What we’re doing is really unique. We’re ahead of Kenyon and Oberlin,” Trelawny-Cassity said.

Though just freshmen, the small group has already re-written a new constitution for community governance at Antioch. Matthews said that in creating the constitution the group took cues from past structures used at Antioch, models from other college campuses and those developed during Antioch revival efforts.

Community governance, a unique and cherished aspect of the Antioch tradition, was described as “one of the most incredible experiential education opportunities,” by Dean of Community Life Louise Smith during the panel discussion. For example, when students wanted more constituency representation on the governance task force, they organized, Smith said, and were successful.

Compared to previous incarnations of community governance at Antioch, there is no community manager and the group does not answer directly to the Antioch Board of Trustees. Many of the nuances of the current system are owed to the fact that the first class has only one year of experience as a community and there are no upperclassmen at the college, Smith said.

“In the constitution there’s the possibility for radical change,” Smith added.

Matthews, who served on the governance task force, agreed that he has learned much from participating in community governance.

“The fact that I’ve helped write a constitution is incredible,” said Matthews, who plans to attend law school after graduation. “It’s that experiential education that I came to Antioch for. We are experiencing real life stuff — as freshmen!”

The impressive amount of work and small number of people to do it was repeatedly cited as a challenge for the college community. But the opportunity to create new policies and practices and work together in intimate small groups has its benefits.

“Our strengths are our challenges,” Matthews said. “Everyone has to work together. Everyone has to multi-task. It’s a great learning experience.” “It’s a gift to know every student so well,” Trelawny-Cassity added of the small class sizes.

David Kammler, who is both associate professor of chemistry and associate dean for academic affairs, said that the college has benefited from the close relationship between faculty and administration. As an administrator, Kammler has a hand in creating policy, and then gets to “live under it to make sure it’s functioning,” he said.

“One of the things we’ve been intentional on is faculty and administration not creating silos,” Kammler said, later adding an optimistic note about the revival opportunity. “We can create a system we firmly believe in,” he said.

Another positive sign is that the college is revising its methods when they don’t work, Eagleson said. For example, the block scheduling system, in which fewer courses are taught in concentrted periods of time, was recently abandoned in favor of regular quarters.

Still, panelists admitted that challenges exist. Without continued investment in the college’s academic and artistic programs, Eagleson warned of an “environment of austerity” such as that which existed during the early 2000s, potentially short-changing students.

“We’re trying to create a model that is sustainable,” Eagleson said of financial investments in the college. “It’s not just money and buildings but human capital,” Eagleson said, to applause.

Added Matthews about the college’s prospects of revival: