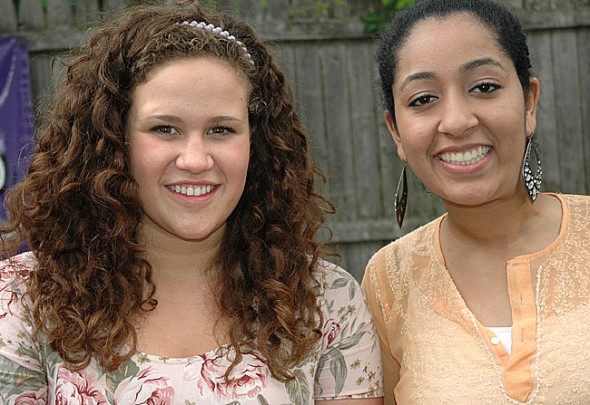 Erika Chick was named the valedictorian and Savita Bathija the salutatorian of their YSHS class of 2012. They will speak at graduation at 7 p.m. on Thursday, May 31, at the high school. (Photo by Lauren Heaton)

The pressures of being students and trying to make plans for the future have reared their Cerberean heads in the lives of Yellow Springs High School seniors Erika Chick and Savita Bathija. But being able to deal with them here in the village has made all the difference to the two rather high-profile students who have been named, respectively, valedictorian and salutatorian of this year’s graduating class.

A mild stress first became apparent to Chick last year while she was being recruited as a swimmer by several Division I and Ivy League schools. To be considered as a candidate at that level, she applied to schools last summer, and then spent the fall being haggled over while receiving mixed messages from admissions officers and coaches about which school to choose and when to do it. By December she had signed with Cornell University in Ithaca, N.Y., and feels happy she made the right decision.

Part of the reason Chick felt comfortable in Ithaca was its funky atmosphere with plenty of natural, open areas, which reminded her of Yellow Springs.

“Ithaca has a similar feeling to Yellow Springs, it’s just a lot bigger — I was drawn to that,” she said.

As they talked about it, both students agreed that the value of Yellow Springs was the feeling of belonging they both got growing up here. Being part of a community of people who know their name and care about how they’re doing means a lot to the girls, who both then got involved in many of the activities at school and in town that propelled them in a cyclic fashion to excel and become leaders.

“I wouldn’t have gotten the same experience elsewhere — in Yellow Springs schools and the town we have a strong sense of community that you can’t find in other places,” Bathija said. “It’s what drew my parents here in the first place.”

Bathija has lived in Yellow Springs with her parents, Saba and Vijay Bathija, all her life, but she started at Ridgewood elementary in Springfield because of its full-day kindergarten and chose to stay there for consistency until freshman year in high school, when she returned to the local schools. She found it challenging at first to find a social groove. So she made a concerted effort to get involved, which is very easy to do in Yellow Springs, she said. She heard an announcement one day about a “Yellow Springs School Force meeting,” which sounded like a good way to make positive change in the schools and community. When she arrived at the work day in the Glen, she was surprised to find people smashing caterpillars and tearing out locust trees, but has been just as happy with school forest as she thought she would be with a “school force.”

“I’m so glad to have accidentally joined that group!” Bathija said.

Both Bathija and Chick have been involved in school forest and SPIDEE, a mentoring program in which high schoolers work with sixth grade students on issues such as diversity, inclusion, peer pressure and self-image. This year both Chick and Bathija helped to train their peers as mentors, a role Bathija also took on as a member of the YSHS facilitators, a group working to bridge gaps between youth and adults in the community. The opportunities she had in the school and the village to work with adults and exercise leadership skills gave Bathija confidence that she could find community anywhere, even at a school with 40,000 students, such as the University of Cincinnati, where she is headed to study pharmacology in the fall.

“This town gives people opportunities to be more mature, like with the two jobs I have,” Bathija said, referring to jobs at Town Drug and Glen Garden Gifts. “I’m so ready to go away to school and get involved in all the things there.”

Teachers and the small school system also supported both girls to be curious, to dig deeper and learn about things that interested them. While Bathija has always known she wanted to try pharmacology in her father’s footsteps, Chick only found her keen interest in genetics after being encouraged by Iyabo Eguaroje to focus her freshman biology research paper on genetic disorders.

“That was probably one of the craziest assignments I’ve ever had,” Chick said, but it fueled a pursuit that she is taking with her to the biology department at Cornell.

Both Bathija and Chick have also appreciated the opportunity to take accelerated classes, such as advanced placement biology, chemistry, and precalc/calculus, which sometimes have as few as four students. In math, the small number of students can make progress quickly and are able to help each other and get individual attention from the teacher when they need it. The atmosphere is so relaxed they sometimes knit while they discuss math concepts, which helps them enjoy learning, they said.

Clearly, neither student is short on motivation. Chick, who has been swimming since she was 3, finished seventh in the state in the 200-freestyle this year and was the one senior from Greene County to receive the Franklin B. Walter All-Scholastic Award for academic achievement, personal accomplishments and community service. Bathija was recognized earlier in the year with the Martin Luther King Peacemaker of the Year award.

Chick is the daughter of Jody and Greg Chick.