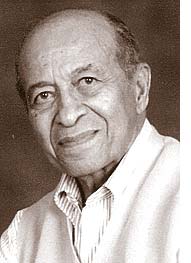 Joseph Douglas Robinson was born in Springfield on June 8, 1931. He grew up in a large and loving family, the youngest son of Benjamin Lee and Cecilia Smith Robinson. Joe attended parochial schools and graduated from Catholic Central High School in 1950, where he was the first four-year letterman in both football and baseball. He served in the United States Air Force for four years, beginning in 1951, and was stationed at Burtonwood AFB, near Liverpool, England. Joe played baseball for the Third Air Force. He was a crack second baseman, and earned the MVP award for 1953 while traveling throughout Europe and North Africa playing ball. While at Burtonwood he met the love of his life at the Grafton Ballroom. Joyce was a 17-year-old singing contestant at the dance hall, and almost immediately they knew they’d be together forever. Joe and Joyce were married December 8, 1954.

The Robinsons moved to Springfield where their children, Jocelyn, Joy and Jody were born. In 1960, the family relocated to Rome, N.Y, where Joe took a position as a logistician at Griffiss AFB, beginning a 36-year career in civil service for the Air Force. Jo Frances and Joseph were born there, and the young family enjoyed many adventures throughout the upstate New York region.

The family moved back to Ohio in 1962, and settled in Yellow Springs that December. Joe took a job at Air Force Logistics Command at Wright-Patterson AFB, and the family became active in community life in the village. Joe served as president of the PTA and joined the Jaycees. In 1964 he helped found the Yellow Springs soccer league. In 1966 Joe and Joyce welcomed their youngest son, Joel, completing the family. Joe and Joyce became YS Athletic Boosters and were instrumental in bringing football back to YSHS. He coached Pee Wee football, too. Joe touched the lives of dozens of young men in the village, and the soccer league continues to engage village youth today.

Joe retired from Wright-Patt in 1986 after being awarded numerous citations for his exemplary work, including the Outstanding Civil Service Award. He then began a second career with Motor Meals, bringing food and cheer to seniors and shut-ins throughout Greene County. In 1999, Joe and Joyce were recognized as Outstanding Grandparents by Central Chapel AME Church, where the program cited “One of their greatest gifts is the example of lives well lived, surrounded by family and friends, caring for each other and giving to others.” They attended uncounted concerts, plays, baseball games, track and cross country meets, and with their physical and virtual presence always made each grandchild feel special.

Joe graduated from Wittenberg University in 1999. In the course of completing his bachelor’s degree at age 69 (after beginning with night classes in 1956), he discovered his passion for painting watercolors, and his works have been exhibited and collected locally, especially his loving portraits of the village of Yellow Springs.

In the early 1980s, Joe was diagnosed with polycystic kidney disease, a hereditary degenerative condition. His family gathered around him in January 2000, when he received the gift of a kidney from his daughter Joy, who he considered his hero. Because of her selflessness, Joe enjoyed over a decade of good health, traveling and living a full and rich life.

Joe was a painter, poet, photographer, and philosopher. He loved to talk about anything and everything, and he never met a stranger. He and Joyce enjoyed many Wednesday night margaritas at Peach’s where they held court with family and friends. He loved his family and his country, and was deeply spiritual, singing in the St. Paul Catholic Church choir for many years. His commitment to justice and equity in all things will forever be a legacy to his children and grandchildren.

The family requests that memorial contributions be made to the PKD Foundation.