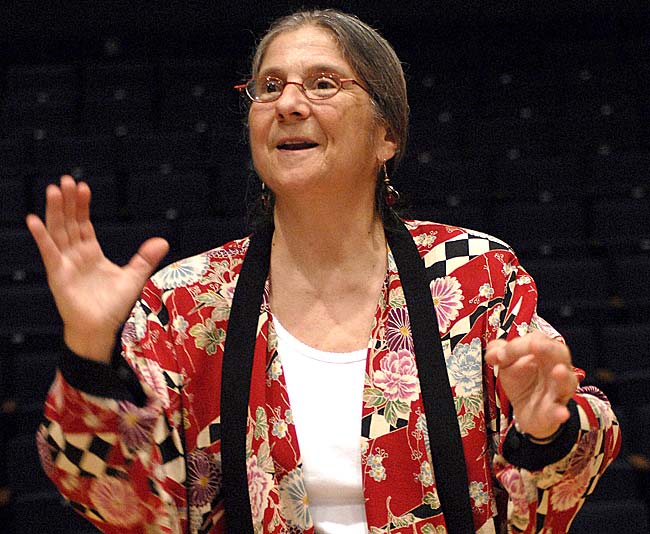 World comes to Cincinnati to sing

These are a few of the 360 chorale ensembles from around the world that will converge in Cincinnati July 4–14 for the 7th World Choir Games, the largest choir competition in the world.

“Cincinnati will be an international summer chorale village,” Cathy Roma said recently. “No one has seen anything like it.”

And Roma, of Yellow Springs, will be in the thick of it. The director of the MUSE women’s choir, which will be competing in the event, Roma will also direct two other ensembles. And as one of the event’s organizers, she co-edited a recently published book, A City That Sings: Cincinnati’s Choral Traditions 1800–2012, to which she contributed a chapter on the history of African-American musical contributions to the city. The book will be available at Sam & Eddie’s Open Books.

A longtime choir director with a doctorate in musical arts from the Cincinnai Conservatory of Music, Roma is well-known in Cincinnati musical circles. Still, she views music as a way to bring people together in a non-competitive spirit, so the idea of a choir competition is “not really where I am, what I value,” she said.

But she finds herself getting caught up in the hoopla, and is eagerly anticipating the event.

“I am a collaborator,” she said. “Somehow I couldn’t not get involved.”

The World Choir Games is a relatively recent phenomenon, and this is its first appearance in North America. The event is held every two years, and 20 cities vied for the privilege of hosting this year’s games. It’s an honor for Cincinnati to have been chosen, Roma said, and she believes the honor is due to the city’s rich tradition of choral music, as documented in the new book.

During the event, choirs will be performing in eight venues in a walkable grid in downtown Cincinnati, including Music Hall, Christ Church Cathedral, the Aronoff Center for the Arts and the Masonic Center. The choirs compete in one of two categories, the Champion category, composed of choirs with a history of competition, and the Open category. The event includes 23 music genres, including men’s vocal, women’s vocal, children’s, spiritual, gospel, folk, jazz and pop. The competition schedule can be found at http://www.2012worldchoirgames.com. Also during the festival, free public Friendship choral events will take place in downtown locations.

MUSE, which has a local following, will perform Friday, July 6, at 8 p.m. at the Cincinnati Masonic Center. Also performing on the same program will be the Female Chorus of Hangzhou Normal University, the Shanghai Conservatory of Music Girls Choir, the Female Chamber Choir Bajalucanke from Bosnia-Herzegovina and the Skanderborg Girls Choir of Denmark.

This is Roma’s second experience in the World Choir Games. In 2010 she was asked to assemble a choir from Cincinnati to compete in that year’s event, held in China. Drawing from all the choirs she directs in the city, including the Unitarian Universalist Choir, MUSE and the Martin Luther King Coalition Chorale, she assembled a group of 25 singers who had only two months to prepare, but brought home two silver medals.

The highlight in 2010, Roma said, was directing “America the Beautiful” in front of 10,000 spectators on the event’s last night.

“It was an amazing opportunity to learn,” she said of the event.

In this year’s World Games, Roma will lead not only MUSE, but the Martin Luther King Coalition Chorale, a 124-voice group she co-founded 21 years ago in an effort to bring together people from diverse neighborhoods and backgrounds. She initially volunteered to lead the group for one year, she said, and is still at it. Co-directing with Bishop Todd O’Neill, Roma will direct the group in the spirituals category, with O’Neill directing gospel.

Roma’s third choir in the competition is the Prison Men’s Chorus, a choir she was asked to start in 1993 that draws from the inmates of Warren Correctional Institution. Hired by Wilmington College then to direct choirs at three prisons, Roma considers herself significantly enriched by the experience.

“I feel very lucky” to have worked in the prisons, she said. “I have relationships over time. We learn so much together, and they’re incredibly receptive and open.”

Roma was hired by Wilmington to direct choirs at three prisons in the early 1990s. At the time, a federal program provided prisoners the opportunity to pursue higher education while incarcerated, and as many as 250 inmates took college classes. The excitement around the college program was palpable, “a contagious learning environment,” she said, and she considers the later federal decision to cut the program “a tragedy.” Because of the program cuts, Roma went from directing music full time in three prisons to leading a single choir part time in the Warren Correctional Institution, although she still teaches full time at Wilmington College.

The 2012 World Choir Games event is, for Roma, a culmination of a lifetime spent making music. Her own love of singing with others was sparked in high school when she attended the Germantown Friends School and, with the school’s choir, traveled to Europe at age 17. She later studied at the University of Wisconsin at Madison, where in 1975 she earned a masters in choral conducting, and later was head of choral activities at the Abington Friends School. She furthered her music studies in Oregon, then came to the Cincinnai Conservatory of Music for a doctorate of musical arts.

“Choral music is my life, my calling,” Roma said.

Roma especially loves using music to bring together people of diverse backgrounds, and to provide a voice for those whose voices have traditionally been squelched. For instance, until the last 20–30 years, there was relatively little music written expressly by and for women.

“How do we express our lives?” she said.

With MUSE, which tackles material that focuses on the lives of women, Roma has found a way to do so.

“Music to me has a mission, to connect people to their lives, and to social causes,” she said.

Roma will be pursuing that mission — and also having a wonderful time — during the 2012 World Choir Games. She invites all music lovers to come to Cincinnati and join her in the “summer music village.” Advance tickets can be purchased online at http://www.2012worldchoirgames.com.