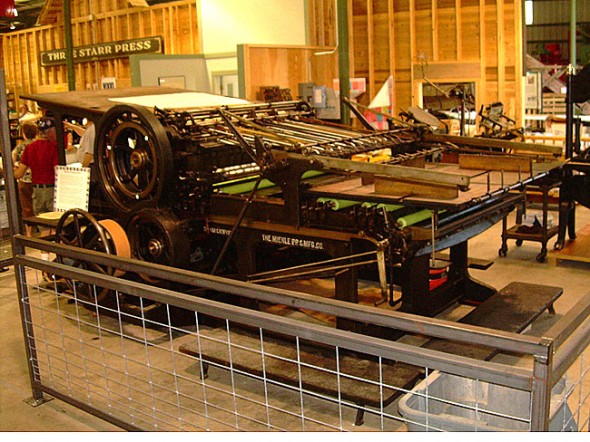 With a little bit of self-aggrandizing shop talk, the News is pleased to share the curious fact that its old printing press, the Miehle, has been restored to working order at Printer’s Hall, a demonstration museum in Mount Pleasant, Iowa.

The News printed its last newspaper, a commemorative edition, on the Miehle on April 29, 1993, two years after it stopped using the letter press to print the paper. Those around at the time guessed it was one of probably just 30 papers in the country that hadn’t yet switched to offset production.

The trusted Miehle was first purchased in 1909 by the U.S. Bureau of Engraving and Printing, where the nation’s currency is made. The YS News purchased the press in 1961 to print its papers (with the help of the indispensable linotype machine, which the News still possesses.) A collector named John Wilcox, of Delaware, Ohio, purchased the press, and when he died two years ago, his estate donated it to Printer’s Hall.

According to Bob Oldham, a local printer who went to Printer’s Hall and saw the press operate, when craftsmen began the restoration, they found that the tympan paper which takes the image to be printed, still had the commemorative edition on it. They saved the tympan paper and installed a fresh sheet to operate the press, he said. It is now powered by electricity, but Printer’s Hall is planning to power it by steam, the way old presses used to be run.

Printer’s Hall is part of Midwest Old Threshers, a museum dedicated to preserving the agricultural heritage of the Midwest.