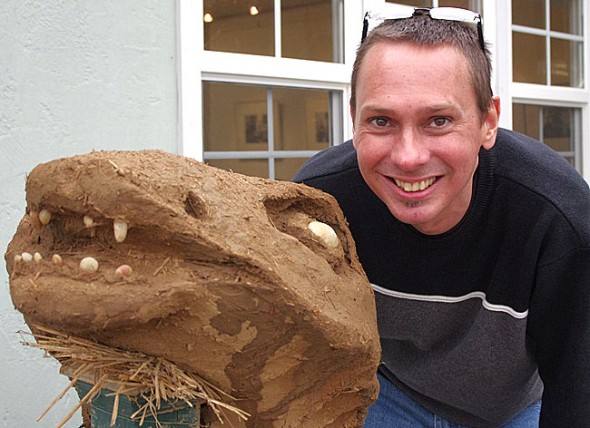 Brian Housh, who moved to the village this year after 12 years in Thailand, works as the gallery marketing director for the Yellow Springs Arts Council. He’s shown here at the group’s new space on Corry Street. (Photo by Sehvilla Mann)

When Brian Housh had lived in Yellow Springs for one month, he surprised a friend by handing him a business card. “You’ve only lived here a month — how can you already have a card?” the friend asked.

Not only was Housh new to town, he had only just recovered from an illness that brought him back from Thailand, where he lived and worked for the last 12 years.

But Housh is “a bit of a workaholic,” as he puts it. For him, to have just one, part-time job — gallery marketing director for the Yellow Springs Arts Council — and to sit on the board of only one nonprofit (Yellow Springs Kids Playhouse), means he has scaled back his schedule significantly, even if he accumulated those responsibilities in just one month.

Housh has family in town— he’s the older brother of Mills Lawn Elementary Principal Matt Housh — and he’s not so far from his hometown roots in West Carrolton. Still, the village is new to him.

“I never experienced the Yellow Springs thing, but Matt did,” said Housh in an interview.
After only six months here, though, he already feels like “a real Yellow Springer.”

Growing up, Housh said, he led a pleasant but “pretty sheltered life,” and he looked forward to branching out. He first left home to attend Cornell University, and later moved to New Orleans to pursue a law degree from Tulane University. “Environmental law carried me through” the first year, he said, which he otherwise hated; he found motivation in “trying to be on the good side.” He practiced law for close to two years, during which he ran a clinic that provided legal services for the mentally ill, which gave him “a feel for more practical applications.”

He then returned to Tulane for a master of business administration degree. With a concentration in finance, he thought about heading for Wall Street, but chose “adventure” instead by moving to Thailand.

“The initial plan was just to live abroad for a year, but it ended up being 12 years,” he said. From the culture to the climate, it was a good fit. “It was always the same weather, always 90 degrees. I loved it. What’s different about Bangkok is it’s a really adventurous kind of place…not so orderly and organized as Beijing or Tokyo,” but with older and less polished parts of the city “juxtaposed with a super-modern setting.”

It was also a good fit business-wise, since a Thai-United States amity treaty allows Americans to wholly own companies they start in Thailand. Housh founded English Solutions, a consulting company that helped corporations train their staff in leadership, the creation of effective presentations and report writing. Their clients included major American companies such as FedEx, Chevron and Citibank, as well as regionally based corporations.

Housh found plenty of demand for English Solutions’ services. At the Thai branches of American-owned companies, “there was maybe an American manager, but everyone else was Thai. Because of American tax law it’s very expensive to have an American be a CEO or a manager…more and more companies are putting Thais in these positions.”

In a culture with a “strong respect for seniority,” said Housh, Thai employees “would often get run over and dominated in communication settings.” They “wanted to understand how to better present their ideas.”

Being immersed in the corporate world didn’t dampen Housh’s enthusiasm for giving back. English Solutions embraced the ethic of corporate social responsibility (CSR), donating 10 percent of their profits to charity. Following the 2004 South Asian tsunami that devastated parts of Thailand as well as Indonesia, Sri Lanka and India, Housh worked with the American Chamber of Commerce to raise half a million dollars for relief.

He also served on the boards of the American School of Bangkok and the American Chamber of Commerce, was vice-president of the Bangkok Music Society and held positions in several other nonprofits and charitable groups as well.

Though Housh had considered moving back to the States, he didn’t have definite plans to do so until last year.

In early 2011 he started to experience health problems, and was diagnosed with ulcerative colitis, a disease that prevents the intestines from properly digesting food.

“It was pretty dire,” said Housh. Initially, medication didn’t help. By the summer he’d lost 60 pounds, leaving just 120 pounds on his six-foot-two-inch frame. His family urged him to return to the States. “It took a bit of pushing,” he said, but in October he arrived for treatment in Columbus.

There, he said, doctors were able to eliminate the virus that was causing the colitis, and he began to recover. The 60 pounds came back. A recent test showed that the virus was “undetectable” in his system, and now the illness “seems like a thing of the past.”

Still, he decided it would be best to live for a while in “a town that was more manageable.”
“It helps that Matt and Deb [Matt’s wife] are here,” he said. Deb, who is an artist, helped Brian get “hooked up” with the Arts Council. As marketing director, he does everything from updating YSAC’s Facebook page to hanging posters. He’s tasked with promoting YSAC’s new gallery space on Corry Street and special events. Bringing his business knowledge to the job, he’s beginning to explore ways to procure more funding for local arts, including from the village itself.

He also hopes to increase collaboration between different arts bodies within Yellow Springs.
“It’s exciting to start conversations with other organizations, galleries [and artists],” he said. “Antioch, Glen Helen — both have beautiful galleries but sometimes are not part of the mix…If I can broaden the collaborative effort, I can feel I’ve succeeded.”

Overall, he said, working for YSAC has been “another great way to get plugged in,” and he’s enjoying life in Yellow Springs.

“I’m surprised how easy it is to meet people,” he said, adding that he can’t leave home without running in to somebody he’s met. He’s thrilled with the village’s bike friendliness, and beats a path between the Corner Cone and “this strip right here,” Xenia Avenue. He’ll check on the special at Current Cuisine, get coffee at the Emporium, settle there for a while and eventually “go to Dino’s for another coffee.”

He’s also spending plenty of time with his young nephews, Tyson and Kenji.

While Housh’s future plans aren’t clear, he does plan to stay in the States. “There’s a lot of pressure from family not to go gallivanting,” he said. In seeking adventure closer to home, though, he still seems likely to find it.