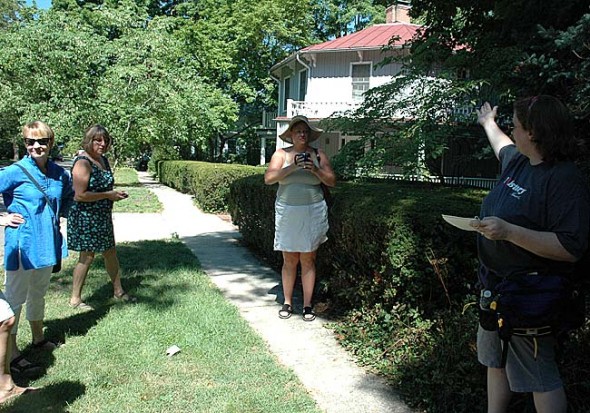 Some of the colorful people and places of Yellow Springs history came alive last Sunday, during a walking tour of the village led by local historian Robin Heise. About 30 people, both villagers and visitors, turned out for the event on a hot summer Sunday morning.

“It’s such a deep history. The more I learn, the more I want to learn, especially about the people and their stories,” Heise said in an interview this week.

One of the stories told by Heise involved “Pistol Packin’ Pearl,” the daughter of town forefather William Means, who in 1922 refused to move out of her home, a large mansion surrounded by gardens and paths, at the current Mills Lawn school location. Her father had sold the property to Antioch College with the understanding that she would leave the home after his death, but a year after he died, she was still there, having resisted the college’s attempts to work out the situation in court. When a constable appeared at the door to remove her, Pearl brandished a rifle, although sheriffs successfully removed her at a later time. Later, Pearl became known for having shot a horse in the head to put the animal out of its misery. She went on to become a professor of elocution at Antioch College, according to Heise.

Sunday walkers also heard about Julian Cone, an inventor who in 1854 built and lived in the “Octagon House” on Whiteman Street. Cone, known as the inventor of the “alarm lock” which set off an alarm in locked drawers when opened, was one of about 19 Ohioans to build a house shaped like an octagon in the mid-1800s, Heise said. A man of many talents, Cone was also a surveyor responsible for the 1855 map of Yellow Springs who died during the Civil War, after having enlisted in the Ohio Volunteer Infantry, according to Heise’s Web site, http://www.ysheritage.org.

The walk began on the Antioch College campus, with Heise talking about the town’s very early years, including the Owenite utopian colony in the 1820s, and the dangerous 1862 journey of freed slaves, led by the Rev. Moncure Conway, who came to Yellow Springs to settle here.

Walkers heard stories of the Weston/Fess House at the corner of South College and Xenia Avenue, the Pennell, Cox, Church and Wolford houses on Walnut Street, the refurbished train station (now the Chamber of Commerce office), the Trail Tavern and the Barr property on Xenia Avenue.

On Dayton Street, Heise described the street that was once the bustling center of the Yellow Springs business district, until a huge fire shifted the downtown focus to Xenia Avenue. The fire of 1895, whose cause has never been determined, left only ruins and blackened shells of Dayton Street buildings, with only one building, that now houses AC Service, still standing.

Yellow Springs had no fire department at the time, so the departments from Xenia and Springfield responded, with the Springfield crew, including horses, “speeding one mile an hour” on U.S. 68 to reach the blaze, Heise said, and a group of Antioch College students forming a bucket brigade to fight the fire.

These and other stories can be found at ysheritage.org. Heise hopes to lead monthly history walks, she said, and she also encourages villagers to share their own stories of local history on her website.

“It’s so important to capture those stories, and everyone has their own story to tell,” she said.