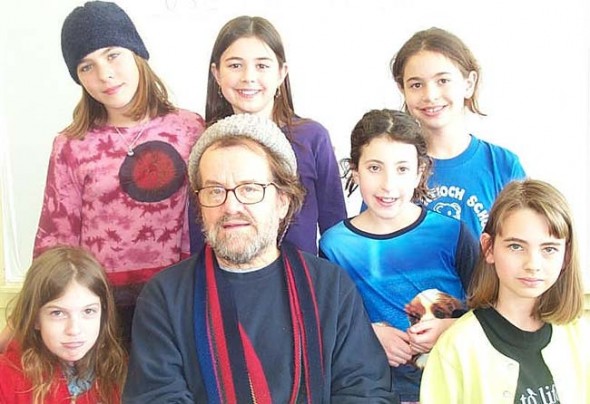 Don Wallis, center,was a lifelong education advocate and died before a film on alternative education he purchased, August to June: Bringing Life Back to School!, could be publicly screened. It will be shown at the Little Art Theatre at 4 p.m. on Oct. 14. From left to right clockwise around Wallis are Mary Triplett, Jade Turner, Tasha Fox, Liana Rothman, Hana Katz-Stein and Emily Corwin Renner, circa 2002. (Submitted photo courtesy of the Antioch School)

How could a public school embrace the ideas of child-centered learning, progressive education and open classrooms? And is it even possible with the increasingly mandated testing and curriculum standards? A film coming to the Little Art Theatre on Oct. 14 at 4 p.m. seeks to answer those questions.

Hosted by the Antioch School in memory of board member and lifelong local education advocate Don Wallis, the film, August to June: Bringing Life to School!, follows the third-fourth grade class of teacher Amy Valens for one year in a northern California public school that uses an open classroom model. Valens, an Antioch College graduate, will speak following the film screening

Wallis, who was passionate about child-directed learning and taught creative writing at the Antioch School for decades, had purchased the film and circulated it amongst Antioch School teachers before he died in January. Donations will be accepted at the screening for the Antioch School’s Don Wallis scholarship fund.

Read more in the Oct. 4 issue of the News.