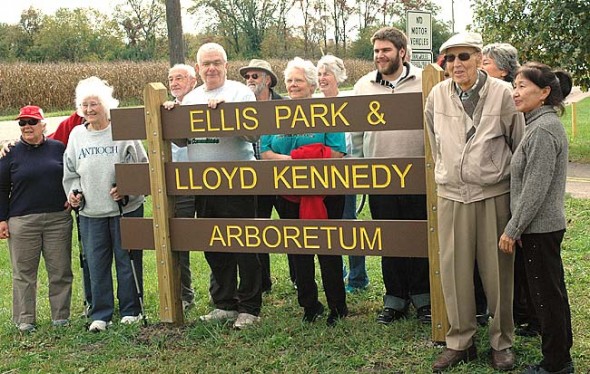 Lloyd Kennedy, second from right, stood at the sign that bears his name during the rededication of Ellis Park, which has been renamed in honor of Kennedy and his long-term commitment to planting trees in the village. (Photo by Lauren Heaton)

Kennedy’s near century of life, trees

So when Anna Bellisari, president of the Yellow Springs Tree Committee, introduced him as the committee’s heart and soul — “our chief tree planting instigator” — Kennedy set the record straight for the gathering of 50 friends and supporters.

Under a clear midday sky, Kennedy, who turns 98 this month, stood next to the park’s newly installed sign and talked a bit about local history — and, of course, trees.

“The oldest plantings here are probably the white pines and the grove of black walnuts,” he said. “I’m not sure which are the oldest, but they probably go back to the 1930s or maybe even the 1920s.”

According to Kennedy, the park, which was once a part of Whitehall farm, was given to the Village of Yellow Springs as a potential water source for the town’s water system. And he said that a community group — one that preceded the tree committee — planted the first groves on the current 18-acre site.

But since the 1970s, Kennedy and the tree committee have planted a wide variety of trees in the park that includes hickory, butternut, Carpathian walnut, pecan, ash, tulip, spruce, sycamore and oak.

“Altogether we’ve got about 20 different species of oak,” Kennedy said. “And that’s something pretty hard to find in any one collection in this state.”

Lloyd Kennedy was born in western Indiana, near Terre Haute, in 1914. Woodrow Wilson was in the second year of his presidency and the first major war of the twentieth century — “The war to end all wars” — had just begun.

In the early 1930s, Kennedy enrolled at Purdue University and graduated with a degree in agronomy in 1936. After graduation, he was awarded a teaching assistantship at Ohio State University and there he earned his masters in agronomy. In 1938 he moved to Yellow Springs and bought a house, the same one he’s lived in for the past 74 years.

Around the time the Second World War was breaking out in Europe, Kennedy was doing work at Antioch for a company that was producing hybrid corn seed.

“The idea was to produce and sell seed corn and make some money for the college,” Kennedy said. “But after a while Antioch didn’t think it was going to be a big money maker so they sold the company.”

When the U.S. entered the war, Kennedy, like millions of young men across the country, was facing the draft.

“I attempted to enlist at Wright Patterson, but I had a little medical problem,” he said. “So they sent me to a hospital for a week, and they came back and told me they wouldn’t accept me as an enlistee.”

After receiving a permanent deferment from the War Department, Kennedy was offered a job with the Ohio Department of Agriculture in 1942, where he worked for the next 38 years until his retirement in 1980.

“I worked as an inspector, looking at any plant material—mostly horticultural products—in commerce,” he said. “My job was to inspect things like nursery stock and perennial flowers, anything that could carry injurious insects or injurious plant diseases. It was my responsibility to certify that the products were safe to move from one locale to another.”

Kennedy said that he has always enjoyed gardening and landscaping. So after almost four decades with the Ohio Department of Agriculture it was a natural shift for him to start learning about trees.

Kennedy’s involvement with trees in Yellow Springs began in the mid-1970s. He helped with planting the downtown Bradford pear trees and later a community planting project on Mills Lawn in October 1976.

The idea behind the Mills Lawn community planting came from a village councilman named Bill Duncan, Kennedy said. Duncan, from whom the small triangular park off Dayton Yellow Springs Road received its name, conceived the idea of soliciting money from different businesses around town to pay for trees to rejuvenate Mills Lawn.

“Many of the old original forest trees from the area had been lost due to age and the construction of the school,” Kennedy said. “So [Duncan] was successful in raising the money, and I had connections with nurseries at that time. I bought the trees wholesale, and one Saturday afternoon in late October, a whole bunch of people from Yellow Springs including myself planted about 25 trees.”

Kennedy, along with other volunteers, continued to plant trees throughout Yellow Springs, including Duncan and Ellis Parks.
“After a while we decided to do something as an organization and make it a permanent effort for planting trees in town,” Kennedy said. “So we formed the tree committee in the spring of 1982.”

Since his retirement from the Ohio Department of Agriculture, Kennedy has made a full time commitment to the Yellow Springs Tree Committee.

One of the people familiar with Kennedy’s work and who attended the rededication ceremony at Ellis Park was Sam Bachtell, a long time Yellow Springs resident.

“I’ve known Lloyd for a long time,” Bachtell said. “And I’ve always admired him for all the work he’s done with trees in Yellow Springs.”

Kennedy, who has been married to his second wife, Fay, for six years, has a high regard for the trees that line Xenia Avenue.
“I helped plant those trees, and they’ve served us very well,” he said. “They were almost perfect for the purpose for which they were intended. They provided color in the spring, color in the fall, and very nice foliage in the summer. They’re clean and don’t create litter. They’re hard to beat for shade trees.”

One of the first projects Kennedy undertook in the 1970s was a commitment to clean up the southwest corner of Ellis Park, a two-acre section that’s separated from the rest of the park by a ditch.

“That section was full of dead Siberian elm and a few other trees like sycamores and walnuts and white pine,” he said. “It had been ignored and abandoned, so after we got an okay from the Village, we decided to clean it up and make it part of the park.”
The first thing Kennedy and the other volunteers had to do was pull out 154 auto tires that had at one time been placed around saplings by a previous organization. But after the young trees had grown large enough to be transplanted in yards, they were all uprooted.

“They took the trees and left the tires,” Kennedy said.

After removing the tires most of what remained was Siberian elm.

“So we started by planting red oak, and now we’ve got more than 100 different kinds in that southwest corner,” he said.
“Most of the trees are labeled, but there’s still lots of work left to do.”

The 18-acre park just north of Yellow Springs that was recently rededicated in his honor holds a lot of Kennedy’s personal history and much of his legacy. And he has some strong opinions about it.

“My feeling about Ellis Park is that it should remain a park,” he said. “The arboretum should be incidental to the park, and I hope that it can be. It’s a picturesque area and if we get too many trees there we could get into trouble.”