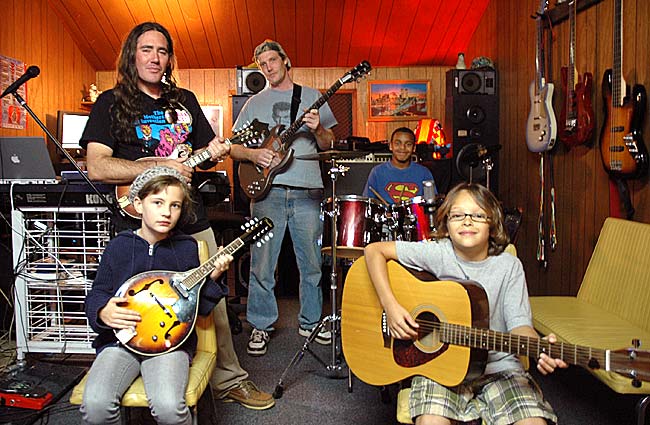 Oliver Simons and Zac Fenton started Lord of the Strings musical instruction in a studio space at MillWorks to teach children and adults how to play instruments alone and with others. Here at a recent music lesson, are, clockwise from front right, Eli Eyrich, Dorian Campbell, Simons, Fenton and Drevin Roberts. (Photo by Megan Bachman)

When teaching is as fun as jamming

Oliver Simons and Zac Fenton were 11 years old when they started their first rock band, Paris, in the late 1980s. They had only one gig, at a church recital in Springfield, where they teased their hair in the bathroom before the show and rocked out as loud as they could. But the experience was seminal, and since then music has been their life. Now Simons and Fenton are passing on their skills, and their passion, to the next generation of young musicians. And with any luck, they’ll create the next Wheels, a local folk sensation.

Simons’ and Fenton’s musical instruction business, Lord of the Strings, opened last month at MillWorks, and already a dozen children and adults are learning to master a variety of instruments, including guitar, keyboards, drum, bass, mandolin and more. The instruction goes beyond the memorization of scales and chords; the goal is to teach people how to make music with others.

“It’s boring to just be told to play [the chords] A, B, D and to count,” Fenton said. “Ours is more of a hands-on technique of playing with them so they get to hear what it sounds like to make music with other people. It’s much more effective and rewarding.”

At a music lesson a few weeks ago, 8-year-olds Eli Eyrich and Dorian Campbell and 10-year-old Drevin Roberts wrote their first song together from three basic chords. Eyrich, whose fingers barely wrap an acoustic guitar neck, handled the chord progression, while Campbell practiced how to strum the mandolin by using her wrist and Roberts pounded away on the drums. According to Simons, playing together is more fun and gives young musicians a leg up if they ever want to be in a band.

Simons and Fenton’s model for teaching children is unique: private lessons intermixed with group jam sessions and sometimes freestyle play when students can pick up any instrument in the studio and give it a try. Exposing young students to different instruments and experiences helps them grow into well-rounded musicians, they said.

“If you get them young, you can find out their talents so you can guide them,” Fenton said. Simons likens the process to learning a foreign language. When they start early and practice together, young musicians will soon become fluent, and have a lifelong skill. Learning to play an instrument has other benefits, Simons said. Practice teaches discipline, and music can be a release of emotion.

“It’s a good outlet for them, whether it’s anger, or sadness, or happiness,” Simons said. “They can express themselves through music.”

Of course, since the dream of being in a rock band never dies, adult students are encouraged to take lessons as well. The space can also be rented by any individual or band for recording. And while Simons and Fenton have on hand and can teach a wide assortment of acoustic and electronic instruments (including turntables), they can easily find knowledgeable instructors in the community if they don’t have the expertise themselves. The outfit is a one stop shop and a real service to the community, Simons emphasized.

“This town needs this,” Simons said. “We just want to provide an affordable, safe, familiar place for everyone to come — kids and adults.”

For Simons and Fenton the business is the culmination of 20 years of playing in bands — both together and apart — while teaching music on the side. Though they thought that by now they would be famous rock stars, teaching is the next best thing, since they get to do what they love every day, they said.

“We’re doing what we want to do,” Simons said. “This is the luckiest job to have. We’re not trying to get rich.”

Fenton’s musical education began in fourth grade when his parents took him to a Pink Floyd concert. He’s been a part of the music scene in San Francisco, Seattle and New York City, plays the guitar and is also a hip-hop producer and electronic music artist.

Simons grew up in a musical family (“It’s a genetic thing,” he said) and has early memories of sleeping in booths at Canal Street Tavern in Dayton while his mother, Christina Hess of local band Heartstrings, played gigs there. He first played the mandolin as a youth at the Antioch College Shakespeare Festival, traveled around the U.S. and Mexico as part of an acoustic duo — Gringos Locos — and now also plays the electric bass.

Together, Fenton and Simons are part of the local group 767, a classic rock/funk band, which covers the likes of Grateful Dead, Devo, Neil Young and the Cars.

Simons and Fenton view Lord of the Strings as an act of giving back to the very community that spawned their musical talents. But there are also selfish motives.

“We need young musicians to play in our bands when we get old,” Fenton joked. “Really we’re secretly recruiting them.”

One Response to “When teaching is as fun as jamming”