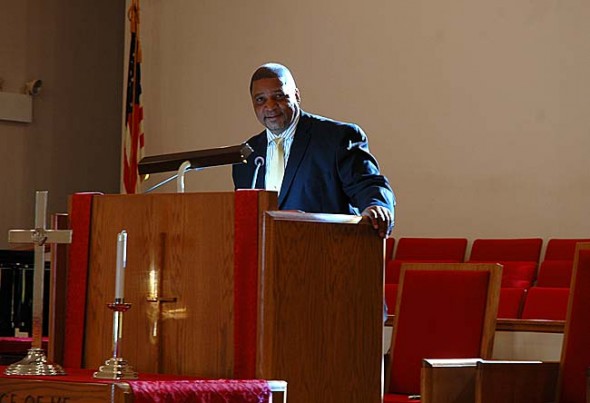 Bill Randolph, the new pastor of the First Baptist Church gave a stirring sermon at Sunday’s worship service. Randolph, who was installed on Nov. 11, is a longtime villager who raised his five children in town. He hopes to grow the church’s dwindling congregation. (Photo by Megan Bachman)

Growing church is just the beginning

In a loud and lively sermon, the new pastor at the Yellow Springs First Baptist Church energized his congregation with a familiar Baptist preacher’s refrain, “When you leave church, you should be tired.”

“Some think they are the spectators,” said Pastor Bill Randolph as he continued his sermon last Sunday. “But you are not the audience — God is the audience,” he said, coaxing a chorus of “Amens” from an equally spirited congregation.

Randolph’s enthusiasm for the Lord — and reviving the historic local church — is welcome news to its parishioners. Down to about 35 regular churchgoers, most of whom attended Sunday’s service, the congregation has a new local leader with an ambitious mission in Randolph. And as the church begins its 150th year, change seems to be on the horizon.

“God wants to grow this church,” said Randolph, a longtime villager, in an interview last week. But filling the pews is just the beginning. A younger, more active and more multi-ethnic membership is needed, Randolph said. And the church should “expand its spiritual lake,” in Randolph’s words, by reaching out to the Yellow Springs community.

“We need to be open to the community and figure out how we as a church can help those in need,” Randolph said. “Because when God is good to you, he wants to be good through you.”

Randolph’s installment as part-time pastor, made official on Nov. 11, was a sort of homecoming for the 60-year-old, a one-time member of the church in the early 1980s when he first moved to the village with his family. For the last 21 years however, he has served as the minister for the First Baptist Church in Jeffersonville. After seeing that church through a period of initial growth, Randolph could do no more for the church, he said, since he didn’t live in the community.

Now with his home just a few blocks from the Yellow Springs First Baptist Church, at Dayton and King streets, and with daily office hours, Randolph stands ready to take the local church to the promised land.

“The First Baptist Church is on the move,” he told the congregation at Sunday’s service. “God is opening doors.”

Karen Durgans, who has been a member of the church off and on since she was 14 and consistently for the last 10 years, is looking forward to seeing the church rise again.

“I’m excited to see what God is going to do,” she said after the service. “We’ve grown much closer because of what we’ve been through. There’s a different spirit here as we’ve grown more humble and pliable over the years.”

Indeed the church has faced, and overcome, adversity before. Founded in 1863 by escaped slaves who came to the area as part of the Conway Colony, the congregation raised money for its first house of worship at Xenia Avenue and Whiteman Street by selling “food off their own tables, in addition to the sale of hogs, chicken, corn and the like,” according to church history. When they outgrew that building, they scraped together cash and donated supplies to put up the current structure in the late 1990s, then worked hard to pay off its mortgage within 10 years.

But having relied on an interim pastor for the last seven years, today the congregation has shrunk to just a few dozen worshippers scattered amongst the pews. And it’s aging, with a median parishioner age of about 60 years old, according to Randolph. As a result, the church needs to bring in more young people, children and men to stay vital, he said, in addition to revamping its sound system, setting up a Web presence and identifying a community need the church could help meet. And the historically black church needs to reach out to a broader segment of the population, Randolph added.

“Being a black church in the heart of a white community, our goal here is to become multiethnic and multi-racial,” Randolph said.

At the same time, there are quite a few opportunities, not the least of which is the church’s rich, 150-year heritage that will be celebrated throughout 2013 with a series of celebrations and community events. Also beginning next year, Sunday services will be broadcast on the Dayton access channel DATV thanks to interest from the station and the donation of video and audio equipment to the church. And there is a strong contingent of 20 or so local children in the Awana program, a youth ministry that meets weekly.

Most importantly, according to Randolph, church leaders and congregants want to see the church revived too, portending a fruitful collaboration.

“Pastor Randolph’s here to work with us and bring other people in,” said Bernice Kirk, the church secretary and a 44-year member of the church. “We need that.”

Randolph, a native of Vallejo, Calif., said he was always a religious person, but only developed a personal relationship with God at age 30, when he received his call to ministry.

“I didn’t want to be an SMO — Sunday Morning Only [parishioner],” Randolph said. “I wanted to be put in the game. That’s when the Lord called me into ministry to preach the gospel.”

So Randolph began studying theology on his own, amassing an impressive collection of religious books (he unpacked 43 boxes of books into his office at the First Baptist Church). He took classes from the Golden Gate Baptist Theological Seminary, and is now finishing his degree from that school with online courses. Randolph’s first pastoral position came in 1991, when he was appointed at the First Baptist Church in Jeffersonville, in Fayette County. A decade earlier, Randolph relocated to Yellow Springs with his wife Florence and five children, all of whom graduated from Yellow Springs High School.

Randolph’s style as a preacher is illustrative, anecdotal and interactive. His voice can go from a commanding boom to a gentle whisper in an instant as he communicates the Gospel in concrete terms to a responsive audience.

“He speaks in a way I can understand,” Kirk, the church secretary, said of Randolph. “And he can bring the scriptures into his sermons.”

Randolph said it’s important to speak in images since the mind thinks in pictures, as well as to update the scriptures for modern times.

“The Ten Commandments were good for those people back then, but it’s 2012,” Randolph said. “So [the question is] how can you translate that to now so that people can live in the glory of God.”

The pulpit at the First Baptist Church isn’t Randolph’s only outlet as a preacher. He has a daily radio show, The Inspiration Vitamin, on a Cedarville Christian radio station and a weekly show on a Columbus Internet hip-hop station aimed at young men. Randolph is the chaplain for the Central State University men’s basketball team. He also works in campus security at Central State, at least until his position at First Baptist Church becomes full time, he said.

Randolph said he is exceptionally busy, but also filled with optimism and excitement about his new position. And even though attendance at last Sunday’s service was sparse, the church added two members on that day, who were welcomed in front of the congregation.

“Ain’t that good news?” Randolph said to congregants as they applauded.