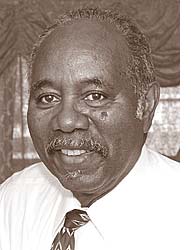 John Sidney Davis of Yellow Springs died on Monday, Oct. 15, at Friends Care Community. He was 75.

John was born in Meadowview, Va. to William and Pearl Fitzsimmons Davis and lived in Ohio for most of his adult life. Mr. Davis was a member of St. John Missionary Baptist Church in Springfield, where he directed the senior choir and served as superintendent of Sunday school.

John enjoyed his vegetable garden and his flower garden and, when not in either garden, he could be found repairing or refurbishing household goods. When his sons were small, he was a Perry League t-ball coach, a little league football coach and a soccer coach. He also worked in the Yellow Springs Boy Scout program.

Funeral services were held at St. John Missionary Baptist Church on Oct. 23. Interment was at Woodland Cemetery in Dayton. For those who would like to do so, the family requests that donations be sent in John’s name to the Miami Valley Alzheimer’s Association (www.alz.org).

One Response to “John Sidney Davis”