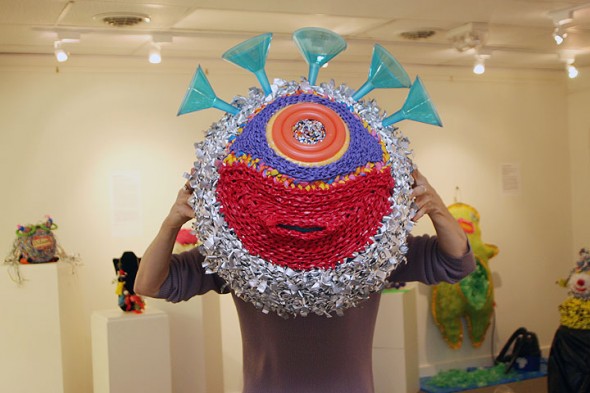 Sondi Kai's head is titled Supreme Leader, her commemorative piece to Rev Cool for his 30 years of service to WYSO. (photo by Suzanne Ehalt)

Local artist Sondi Kai will host an opening reception for her exhibit, “Reincarnated: The New Forever Life of Plastic,” at the Yellow Springs Arts Council Gallery (YSAC) on Friday, November 16, from 6 – 9 pm. Ms. Kai will also lead an Artist Talk on December 8 (5-6:30pm) to close her show.

The YSAC is located at 111 Corry Street.

Ms. Kai said that venture into working with plastic began in 2009.

“On a very normal day I saw a particularly colorful chip bag with foil interior and thought to myself, ‘I think I’ll save a few of these and make something, ya know, shiny and glitzy.’”

“What was once curious innocence is now a seductive traipsing into the unknown,” she said.

“At this point, my average speed in creating a piece includes several runs into smashing failures before I can actually get a grip on all the various properties in motion.

“The worst part is I can no longer drive anywhere without scoping trash, which is really worse than texting, so I’ve just assigned extra angels to my car. Daily, my head swims with plastic inventory in all shades of color and weight, as well as mental maps where all the discarded plastic hoards are waiting by the roadside to be repurposed. This is an arduous task. What was I thinking?”

More on this story will appear in this week’s YS News.