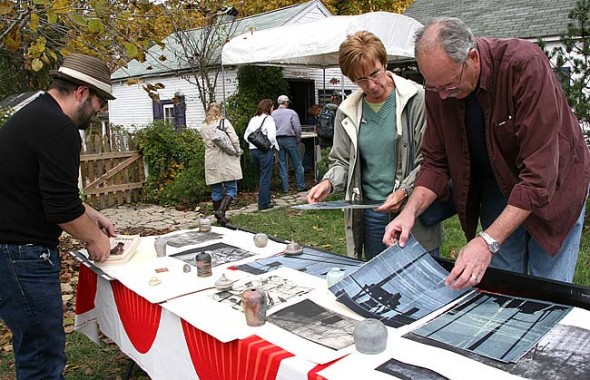 About 9:50 a.m., on the first day of the annual Yellow Springs Studio Tour last month, Zoe Johnstone rolled into Lisa Goldberg’s pottery studio on Meredith Road just outside of the village. As she does each year, the art collector from Columbus had arrived before the crowds rush in at 10 a.m. to get her pick of the litter of Goldberg’s new ceramic work before stopping for brunch in Yellow Springs.

For Johnstone, the studio tour is an opportunity to expand her collection and see artists at work in their studios. But it is also a perfect time for a fun weekend in downtown Yellow Springs with her Columbus friends.

“It’s a wonderful outing,” Johnstone said of studio tour, a two-day event in October. “And it’s been fun to watch the progress of the artists in Yellow Springs.”

Johnstone is one of hundreds of tourists from the region who annually flock to the Yellow Springs Artist Studio Tour, which was held this year on Oct. 20 and Oct. 21 and featured 27 artists spread across eight studios in and around the village. Since 2004 the studio tour has been a seminal event in the local arts scene; the most visited studios can see upwards of 500 visitors each day. But it’s also become one of the heaviest tourist traffic days for downtown Yellow Springs, according to several downtown shop owners.

“A lot of business owners get that our customer is their customer,” said Goldberg, also the Studio Tour organizer. “The people who come [for Studio Tour] are looking to buy. It’s a whole different audience. They’re not here for people-watching.”

Lee Kibblewhite, of Asanda Imports, can attest to the observation. He saw foot traffic second only to a Street Fair day and sales 25 to 30 percent higher than usual. It wasn’t just that he gained more customers because of the tour, but the tour also had more visitors because he promoted it to customers.

“It’s a symbiotic relationship,” Kibblewhite said of the shops and tour. “We’re helping one another. It’s fabulous.”

Goldberg, who volunteers an average of 15 hours per week year-round organizing the tour, said one of the reasons she started the event was to help the local economy by bringing scores of visitors to the community. She also wanted to attract new customers to help the bottom line of local artists, since they contribute to the local economy by paying income tax, sales tax and property tax.

“It’s harder to makes a living as an artist,” Goldberg explained. “Art fairs are expensive and competitive. We’re trying to provide opportunities for artists to have more relationships and interaction [with customers], which greatly increases their desire to buy from you.”

And buying they are. This year tour sales reached $28,000. Several artists sold close to $3,000 in artwork over the two days. First-time participant Vicki Rulli, who prints original photographs on wood and metal, sold pieces from as little as $50, for limited edition prints, to up to $400 for an original beeswax encaustic work.

But Rulli, whose work sells around the world, reaped more than an immediate financial reward from the tour. She and her husband, Tom Heaphey, were invited to have a gallery show in Greeneville, and will now sell their wares in two Springfield-area shops from contacts made during the tour. And they enjoyed the conversations with adoring art lovers.

“What I loved about studio tour is that the caliber of people that came were very interested in our process,” Rulli said. “That’s how you sell pieces: when people understand there’s more to it.”

Local painter Chris Glaser, in his fourth studio tour, also enjoys hearing what visitors think about his work, which this year featured visionary representations of yoga poses. Though he sells some work during and even months after the studio tour, it’s the rare chance to interact with customers that keeps him involved.

“To get the work done you have to be a recluse,” he said. “So it’s exciting to build up to it and it’s a lot of work, but it’s really fun to get feedback.”

While some visitors wandered through artists’ studios, others were taking a break to pop into some local shops or have a meal in town. Downtown jewelry shop Ohio Silver’s sales were higher than normal as it sold more higher-priced items during the weekend. On Saturday, the line for Sunrise Cafe was out the door and down the street. And The Winds Cafe was so packed it was difficult to even get in the door, according to Yellow Springs Chamber of Commerce director Karen Wintrow. In fact, for The Winds the weekend was as profitable as a Street Fair weekend.

“The weekend as a whole has been almost identical dollar-wise to Street Fair,” said Winds owner Mary Kay Smith. “We’re always real busy on Friday because of The Art Stroll, but we were surprised how much more busy we were for lunch and dinner on Saturday and brunch on Sunday.”

Though there are many comparisons in terms of tourist traffic, Wintrow said that Saturday and Sunday’s Studio Tour, which, along with Friday’s Art Stroll is billed as “Art in the Springs,” attracts a different audience than Street Fair.

“It’s a very different crowd,” Wintrow said. “Street Fair is more about the whole realm of what Yellow Springs is about, and we want it to be accessible to everyone. We’re not concentrating on fine art. [Studio Tour]’s more about fine art and artists.”

“I think Yellow Springs will always have a different vibe,” Wintrow said. “It’s not only fine arts and crafts…it’s for people who may not think they like art to come here and see it in unexpected ways.”

But for Johnstone, it’s the high-quality art that brings her back to studio tour each year. Johnstone collects some of the biggest names in pottery, and she loves the work of Yellow Springs artists, whose work compares to those selling upwards of $10,000 per piece. Last week, Johnstone was in Chicago for the annual SOFA exhibit of contemporary modern art and design, where this year Yellow Springs artist and frequent studio tour participant Michael Jones is being featured and where previously studio tour artist Justin Teilhet showed.

“Yellow Springs artists are in the limelight,” Johnstone said. “It’s not some ditsy little art scene. These are artists that have some renown.”