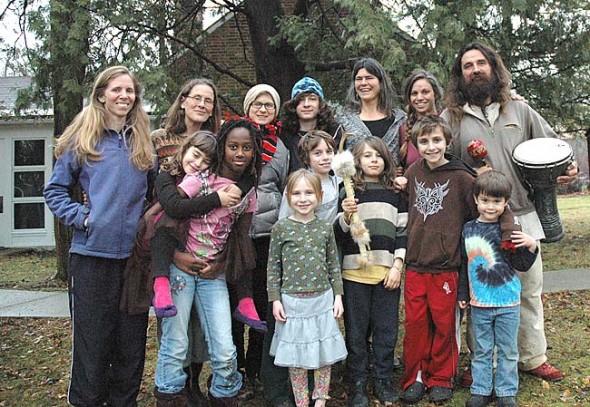 Birth. Death. Rebirth. Since the dawn of humankind the cycles of the natural world have held people to material life. And for nearly as long, people have searched for a way to transcend the material through the spiritual. The Tree of Life is one spiritual symbol that has persisted through the ages and different lands, and it is the focus of a new local performance to honor the winter solstice and inspire a movement back to the spirit.

“Return to the Garden: A Ceremony for the New Time” will be presented Saturday, Dec. 22, the evening of the solstice, at 7 p.m. in Westminster Hall at the First Presbyterian Church.

In one version of the world’s beginning, there was Adam and Eve, who ate from the Tree of Knowledge of good and evil and were driven from the Garden of Eden. According to the rest of the Biblical story, they, along with all the people of the earth, were later redeemed by the birth and sacrifice of Christ. Since Medieval times, these stories have been performed in a series of plays on the island of Oberufer on the Rhine River. The tradition was brought to Yellow Springs in 1962 by Lotte and Uwe Stave, a German family who oversaw the continuation of The Paradise Play and The Nativity and Shepherds Play each Christmas.

Local resident Abby Cobb has attended the performances for many years, drawn to their simplistic beauty, spiritual message and familiarity from her childhood as a minister’s daughter. Recently she brought her daughter Luisa Bieri Rios and grandson Tomé to see them. Afterward, Luisa expressed her disconnection to the themes of shame and punishment in the historic plays, and her reluctance to introduce the holidays to her young son through them.

“It’s the snake who says you will have knowledge like God of good and evil lest you also eat from the Tree of Life (I don’t pretend to be an expert, but that is what I read),” she said. “I thought, Oh! The Tree of Life, that’s what the play needs to be about.”

Since the Medieval plays are performed every other year, and this was an off year, Cobb and several people from a local meditation group began discussing what a Christmas play for modern times might be…

In an alternate beginning, there was water and the sound of drumming. There was an indigenous creation rooted in the Native American tradition. There was also a snake that shed its skin in one piece to symbolize a release of old stories that may have been a burden. And there was a Tree of Life that reached back to the Mayans, the ancient Chinese and the Jews through a connection to the earth.

“Now is the time, the time is now to honor the earth as one, together we are one,” one of the songs in the play goes.

Local resident Rob Kola, who helped create the play, believes that living in ways that respect the earth is critical for both peace as well as human survival.

“A ‘return to the garden’ is necessary for our survival as a species,” he said. “This is our garden, this is our paradise, and without human beings making this step consciously, we won’t be able to sustain ourselves.”

The play includes strong messages of transformation from a state of fear and control to one that connects to the life around us and allows us all to feel responsible for each other and the place we live. But the old stories and past experiences were all necessary in order to gain a new understanding, according to Jennifer Johnson.

“This is the next story, inclusive of the Bible, the Native American tribes and our shared history,” she said. “In honoring our past traditions, we realized we need to create a new story, a return to wholeness, a transformation.”

Jenny Johnson (no relation to Jennifer) embodies that transformation, having grown up Catholic and later shed that skin for one that was a better fit for both her and the modern consciousness. Karen Diamond, who composed an original song for the play, is also living a transformation as she and her family prepare to move out West just after the solstice.

“The play is a mirror of what I’m going through, shedding skin and letting go,” she said.

Transformation may be especially accessible this solstice, which marks the end of the Mayan calendar. While many have predicted an end to the world on that date, the “Return to the Garden” players foresee an opening to positive change and healing.

The event is free, but donations will be accepted to help defray costs. Any profits will be donated to the Yellow Springs Food Pantry.