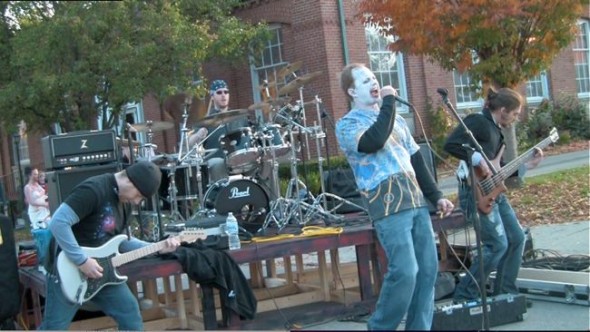 By Means of Words, here performing at the Yellow Springs Zombie Walk in October, is led by villager Tom Clevenger, center. (Photo by Megan Bachman)

Many bands claim to defy genre, but By Means of Words, led by Yellow Springs front man Tom Clevenger, is truly a paradox in the world of heavy metal.

Unlike most hard rock, the four-piece Dayton band is best enjoyed outside of a bar, according to members, saying it takes a bit of mindfulness to consume its conceptual lyrics and labyrinth of layered parts. BMOW is not for the casual listener.

“What we’re trying to do is engage with people,” Jobe said. “You’re involved intellectually, spiritually and it’s hard to do that when you’ve had 12 shots of tequila.”

This weekend locals will have a chance to do just that. By Means of Words will play a fully acoustic set at of their music this Saturday, Jan. 5, at 7 p.m. the Spirited Goat Coffeehouse, 118 Dayton Street. The show is all ages and free.

By Means of Words playing at the Yellow Springs Zombie Walk on Oct. 20, 2012

Break down BMOW and you have four distinct parts revolving around a musical center. But even that pigenholing is incomplete. To Jobe, who uses a whopping 24-piece drum kit when space allows, the drums are more than the rhythm section. Most drum sets have three notes, but Jobe’s kit enables him to play chords across two octaves. He draws inspiration from jazz percussionists as much as Rush’s Neil Peart.

“I’m not a pocket drummer that just holds time with boom-chick-boom-chick — I’m much more melodic,” Jobe said. “I look at the drums more like a xylophone or piano.”

Meanwhile, Berkeley College of Music grad Mitch Jones plays the bass like a guitarist, sometimes aping — at other time harmonizing with — lead guitarist Wallace’s lines. He describes himself as, musically, the reincarnation of bass virtuoso Jaco Pastorius (The legend has merit; he was born on the day Pastorius died).

And Wallace, as the band’s lead composer, behaves somewhat like a drummer; he’s a master of writing songs in multiple time signatures, taking cues from Tool, Mars Volta and Led Zeppelin. His influences range from blues to progressive hard rock, wherever music has both melody and rhythmic complexity.

Then perhaps it is vocalist Clevenger who marries the band’s disparate elements. The last band member to join, Clevenger responded to an ad on Craigslist in early 2012 and quickly impressed in tryouts.

“It was his natural ability to come up with melodies over any riffs,” Wallace said. “It can be difficult with a busy guitar and busy drums. But Tom immediately found some room. It was a great fit.”

Earlier vocalists couldn’t keep up with the band, according to Wallace. And Clevenger brought more than the typical hard rock singer — he can sing as well as yell. Though Clevenger admits to “having a lot of lung to give,” his lines are dynamic and his vocal range impressive. Chalk that up to growing up in a country music household, singing at talent shows by age 5 and later graduating to the numerous “stinky rooms” of the grunge scene, he says. In Clevenger’s vocals one can hear echoes of Maynard James Keenan, Chris Cornell and Eddie Vedder.

Still, heavy metal listeners don’t quite know what to make of BMOW. The best compliment the band received was from a 60-year-old woman who called them “strange good.” Wallace hopes listeners react to the music by turning towards one another and asking, “What just happened?”

It might come down to the music’s basic paradox: “It sounds angry but it’s really not,” Clevenger says. It’s this, and the music’s constantly changing time signatures, that causes some confusion in the mosh pit.

“People can’t mosh to it because someone will hurt their neck,” Jobe joked.