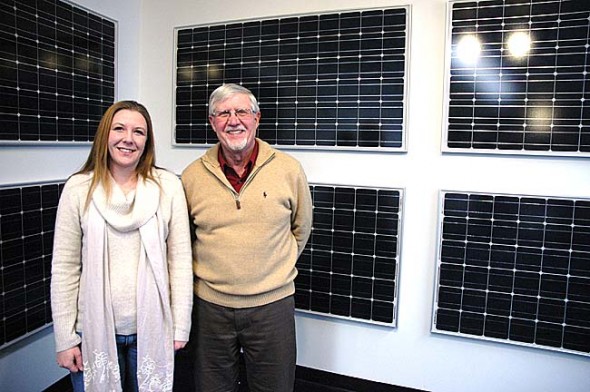 Interested in solar power? Adding insulation to your home? A super high-efficiency furnace? Then one local company, which is expanding services this month under a new name, may be the place to go for homeowners wanting to go green.

GreenTech Energy Solutions is ready to blanket Yellow Springs rooftops in solar arrays and weatherize local homes’ makeovers to save fuel, according to its owners.

The new company is a merger of Lindstrom-Sprague Mechanical Services, an HVAC company owned by Scott and Shannon Lindstrom, with Yellow Springs Renewable Energy, an offshoot the Lindstroms founded in 2010. Alternative energy expert Chris Meyer has joined the merged company, which will offer energy audits and complete home makeovers in addition to its line of solar power products. GreenTech is headquartered in Oldtown, five miles south of Yellow Springs.

“We’re focusing both companies on more of a renewable energy concept,” explained Scott Lindstrom in an interview this week. “Instead of being an HVAC company where we just focus on your box — your furnace or air conditioner — we’re going to look at your whole house. No one else is doing that.”

Lindstrom, who this week is completing his training as a LEED-certified green building professional and a Building Performance Institute energy auditor, said the building industry is fast moving in this new direction, since many mechanical problems can be traced to house design, ductwork, insulation and other structural factors.

“We’re not just going into their house to look at their air conditioner or furnace,” Lindstrom said. “Eighty-percent of the reason furnaces aren’t working properly is because of other reasons.”

The company also hopes to install more solar photovoltaic, or PV, systems in the area since PV prices are at historic lows and system payback times are getting faster, according to Meyer. After a home weatherization, solar panels are the next step to going green.

“If someone says, ‘I want to do my part for my children and grandchildren, and reduce my carbon footprint,’ solar is really a way to [do it],” Meyer said. “Always the first thing is reduce what you use, but once you reduce, the next step is looking to generate some of your own power.”

The timing is right for solar, Meyer said, since cheap Chinese panels have been flooding the market in recent years, leading to bargain prices for PVs, which have fallen in price by one-third in five years. Today a 6-kilowatt array consisting of about 25 to 30 panels would cost a homeowner $27,000 upfront, according to a company handout. But factoring in the first year’s incentives and energy savings, the cost would be just $14,000 at the end of the year. The system takes about four to seven years to pay back, Meyer said, after which the homeowner gets virtually free electricity for the life of the panels, or around 40 years.

While Yellow Springs Renewable Energy did not install any small PV systems inside the village, it did put up solar panels on a slew of houses in Miami Township, Oldtown, Shawnee and Covington. And it saw success on a large scale. The company led development of a 1.5-acre, 521-kilowatt array next to the football stadium at Urbana University that went online in November. And under its new name, GreenTech will soon break ground as a subcontractor on a massive 2.15-megawatt, 11,000-panel array for Cedarville University, which will be the largest solar installation in Greene County, and maybe all of southwest Ohio, according to Meyer.

GreenTech also wants to help the Village of Yellow Springs put up its own solar farm. While a 2.5-megawatt array on Village property developed through Columbus company SolarVision fell through last year, Meyer said he believes GreenTech could secure financing in collaboration with the Village.

“I think we could go back in with a different developer and put together a [financial] package and we would be happy to do that,” Meyer said. “If Yellow Springs wanted to do it again, we could shop it.”

There could also be an opportunity for Yellow Springs schools to erect its own solar array, Lindstrom added.

Meyer, a Xenia native, comes to GreenTech with decades of experience in the energy industry. He worked in high-performance insulation and most recently was the energy director of the Dayton Development Coalition. He is currently a board member of Green Energy Ohio.

In addition to solar photovoltaic panels, GreenTech is equipped to install solar thermal panels to take care of a home’s hot water needs. And the company will soon be able to perform in-depth energy audits to find out where homes are leaking energy and craft solutions to solve the problem.

Meyer said he hopes GreenTech can pick up where a local auditing project, run by Net0Homes and Community Solutions, left off. Net0Homes inspected around 50 local homes, but many homeowners didn’t follow up on the company’s recommendations. That’s because homeowners lacked firm cost estimates from local contractors, according to Pat Murphy of Community Solutions.

“It became clear that if you didn’t have contractors ready to do this stuff, it wasn’t going to go anywhere,” Murphy said.

After GreenTech audits a home, the company can provide a retrofit strategy to the customer and then do the work. Adding insulation and fixing air infiltration problems are at the core of a typical house weatherization, Murphy explained, and might cost in the range of $5,000 to $10,000. Murphy, for one, is excited that a local firm will have the skills to complete energy retrofits, which he said may become more popular.

“I think it’s really good for the village to have this capability,” Murphy said. “Probably there could be a good opportunity here because there will be people in Yellow Springs who will do this because they want to make a contribution to the world.”

There are currently six solar photovoltaic installations in and around the village, including a self-financed 50-kilowatt array erected at Antioch College last year by an Athens company and a combined 15-kilowatts of solar capacity at local residences.