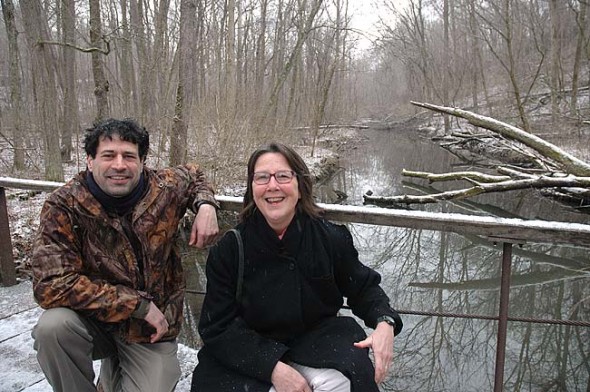 Easement to protect Glen for good

As long as most anyone alive remembers, Glen Helen has been protected as a nature preserve. Hugh Taylor Birch insisted on it in 1927 when he deeded the land to Antioch College in his daughter’s memory. But when David Neuhardt set his attorney’s eyes on the dated document, he saw holes and risk all over it. And he recommended that if community members expected to keep their beloved preserve beyond the current generation, they needed a more binding covenant to safeguard it.

When Krista Magaw heard those words, she couldn’t stop thinking how horrible it would be to one day lose the Glen.

“I couldn’t let go of it,” she said in an interview this week. But as director of the Tecumseh Land Trust, she could absolutely do something to change it.

Eight years later, with the support of a resounding 10 nonprofit, state and local government agencies, as well as $1.6 million in secured funding, the Glen has taken its first step into the protective fold of a permanent conservation easement. The agreement, held by the TLT, will prohibit any future subdivision or commercial development of the 1,000-acre park for anyone but the birds and beasts who currently reside there.

“We’ve hit a major milestone here,” Glen Helen Ecology Institute Director Nick Boutis said this week. “Though people have been trying to establish enduring protection for the Glen for the past 90 years, nothing like this in the history of the preserve has ever been done before.”

The Glen closed on the first easement last week, covering 536 acres and purchased with $1.2 million from the Ohio Environmental Protection Agency’s Water Resource Restoration Sponsor Program, $200,000 from the Dayton Foundation’s Little Miami Upper River Fund, and $237,162 from the Clean Ohio Fund. The Trust for Public Land helped manage the partnerships and Antioch University was a co-grantor of the easement.

This half of the easement offers the strictest protection for the most environmentally sensitive areas along two miles of the Little Miami River and two miles of Yellow Springs and Birch creeks that wind through the Glen. The waterways and limestone cliffs that border them have created an “enormous zone of protected area that is very rare for anywhere in Ohio,” according to Boutis. As farming is the major land use in the region, many of the rivers and the riparian zones around them have been subjected to erosion and runoff, which affects the habitats downstream as well. But as the Glen as been protected for nearly 100 years, with sensitive care from the 100,000 visitors it receives every year, the Glen’s healthy stream habitat is able to host a “high level of diversity” of species, Magaw said.

The level of protection the Glen offers was important enough to the Little Miami Upper River Fund to protect in perpetuity, according to fund chairman Irv Bieser.

“This is a big deal — compared to other easements along the Little Miami, this is very big in size,” Bieser said this week.

In many instances, proceeds from easement purchase go the property owners, which in this case would be the college. But Antioch College leaders see the Glen as a “tremendous asset of the college” that should continue to be used by the community and the college for both recreational and academic purposes, College President Mark Roosevelt said this week. To further that end, all easement proceeds shall be invested in an endowment fund at the Dayton Foundation (separate from the Glen’s endowment funds with Antioch College and the Yellow Springs Community Foundation.) Most of the fund will be in pure endowment form, while some will be spent on operational needs. But all the proceeds will be used to benefit the Glen.

While many healthy nature preserves of similar size to the Glen, including Aullwood Audubon Center and the Cincinnati Nature Center, receive half of their operating expenses from endowment revenue, according to Boutis, the Glen has been getting only 10 percent of its operational needs from its endowment. The influx of support from the easement sale, while far from fulfilling all the Glen’s needs, “moves us from a place of uncertainty to a place of confidence and assurance that what we have now is here for the present and the future,” Boutis said.

A second easement providing permanent protection for the entire Glen preserve is expected to be completed later this year. The second easement, which will add an additional $1 million to the Glen’s endowment, was purchased with $100,000 of support from the Village of Yellow Springs, more Clean Ohio Funds and support from the Ohio Natural Resources Conservation Service. The best thing about the easements, according to Magaw, is that they make permanent the land management practices that the Glen’s leadership has always provided for the preserve.

“What they want the Glen to do, to minimize disturbance of the natural land, just puts on paper what was already being done,” she said.