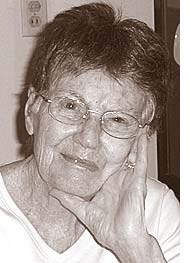 Rachel Elaine Newcomb Dewey died Thursday, Feb. 21. She was 91. A memorial will be held at the Glen Helen Building, July 4, at 2 p.m.

Rachel was born March 3, 1921, in Mason City, Cerro Gordo County, Iowa. Her parents were Rollo Edward Newcomb and Pearl Anderson Vickers Newcomb. They lived on a farm near Donnelson, Iowa, to make ends meet during the Depression, when the four eldest children literally had to ride bareback on one horse three miles to school and back. Rachel was the last survivor of six siblings: Rebecca, who died at birth, Nelois Elizabeth Newcomb McClintock, Robert Dixon Newcomb, Donald Hayes Newcomb, and Martha Eulalia Lee Newcomb Lydolph. On her father’s side, she was a descendant of William Bradford who came over on the Mayflower, and on her mother’s side, her great-grandfather, John Anderson Jr., was born in Edinburgh, Scotland in 1809. 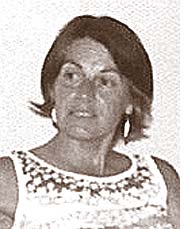 Rachel was invited to join a traveling circus when she was in high school, because she could hang on a trapeze by her toes. Her mother refused to let her go. She proceeded to win the state typing contest. She graduated from the State University of Iowa in 1942 with a bachelor of arts degree, majoring in education. It was here that she met her husband, George Westbrook Dewey. They were married in Iowa on May 17, 1942. Their honeymoon was spent traveling by train to Las Vegas, Nev. where George served in the Army Air Corps. Daughter Susan was born in Las Vegas, daughter Kathy was born in Hillsdale, Mich. and sons Gregory (Duke) and Nick were born in Springfield. Thomas (Kimathi) Williams was invited to be a member of the family in 1967.

When the Deweys landed in Ohio in 1947, Rachel figured out she had moved 14 times with two toddlers. “All the war brides did it,” she said. They lived with his parents, they lived with her parents, they moved with early jobs after the war. When they landed in Yellow Springs, George and Rachel both swore they wouldn’t move anymore. They did show their kids the United States, camping in nearly every state of the union on three-week trips every summer. Rachel was soon a master of the Coleman stove, creating such amazing dishes that other campers would ask for her recipes.

Rachel was, first and foremost, a homemaker. Many people will attest that Rachel taught them to use a sewing machine. Her homemade bread was a staple in the household, and the delicious dinners she created for the Antioch theater department cast parties and family dinner parties were elaborate and colorful.

But she was also a writer. She wrote several articles picked up by Parents Magazine; one discussed letting children help in the kitchen. She typed scripts for a local movie maker, Jarvis Couillard, back in the days when everything was done in triplicate on messy carbon paper. She recently put her writings into a book for her children and other family members.

Rachel continued with her education, convincing her daughters that they could master the pressure cooker and provide dinner while she commuted to Miami University, earning a master’s degree in remedial education in 1961. She tutored kids in her home, and later tutored Antioch students who, until her death, would still drop by to tell her how it saved their educational careers. Later, in 1981, she received a master of education degree in early childhood education from Wright State.

One of her most interesting jobs, working at Fels Institute, was to create several movies with Billie Hotaling on the different ways children develop, some concentrating on large motor skills building with giant blocks, some on intricate small motor skills learning to cut and paste, some on verbal skills. The children were followed throughout the year. The films were funded by the Federal Health and Welfare Deptartment and distributed by them as well.

Rachel was a Head Start advisor in Ohio and West Virginia, and traveled to pre-schools to assist teachers, and encourage them and persuade them to change some of their teaching approaches.

Her hobbies were cooking and sewing, writing, reading and, above all, tennis. It was a sad day when she could no longer ignore the bursitis in her shoulder and was forced to give up tennis.

Rachel’s house was always open to any Antioch students who were passing through or visiting, as well as anyone whom her children would send her way. She frequently took a carload of Antioch School kids on Wednesday afternoons to visit various factories, such as Mikesell’s Potato Chips, International Harvester and Maytag, to see how things were made. Her one regret was a visit to the slaughterhouse, where all the kids got sick.

George and Rachel took in numerous exchange students and made many international trips including trips to India, Portugal, France, Egypt, Thailand, Guatemala, Panama and Mexico, sometimes staying with their exchange students. Rachel made a trip to Scotland with her daughters and their husbands after George died.

Rachel was an avid birder and one of her greatest pleasures was to see a painted bunting, a bird her mother always wished to see. Up until the last three months of her life, she was still playing bridge and teaching it at the Senior Center. She was a member of the Shakespeare Club as well.

Rachel was a joyful and loving woman, giving her children and grandchildren unconditional love, and always encouraging them in their endeavors.

A memorial will be held at the Glen Helen Building, July 4, at 2 p.m.