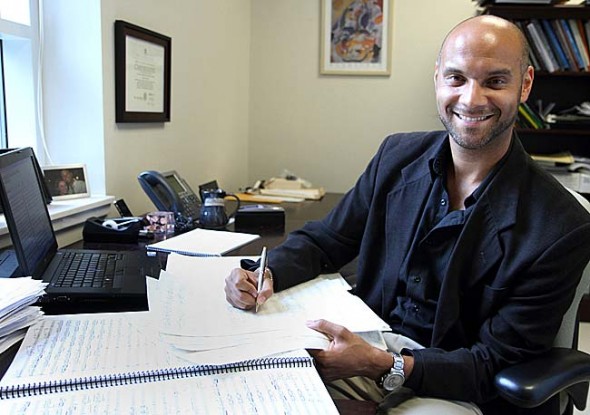 Chamber Music Yellow Springs has commissioned a string quartet by Yellow Springs native Allen McCullough that will be performed by the Aeolus Quartet on Sunday, April 14. The piece was written for the Daedalus Quartet, who was scheduled to perform it this weekend, but an injury forced a change in plans. (Photo courtesy of Mercer University)

From the level at which Allen McCullough listens, the average ear is way behind the times. In fact, he said, the lag time for modern music listeners isn’t a matter of a few years, but more like a century or two. And while Beethoven and Brahms created some of the most beautiful music in the world, McCullough believes it’s time for people to get a new sound. And by that he doesn’t mean Pink and Flo Rida.

The frame that has so completely dominated the music Americans listen to today, from country to classical to pop, is the principle of “key,” McCullough said in an interview last week from his home in Indiana. Arranging notes according to a certain key limits the groupings and arrangements that can be created to what are known as the major and minor scales, he said, and  that specific range of sound is what the majority of listeners have come to think of as beautiful. But as McCullough explained, it’s only beautiful because it’s what we’ve become accustomed to hearing.

“But how long can you do that before you want to do something else?” he said. “It’s shocking that almost 100 years later our ears have not adjusted.”

From his perspective, there are infinite ways to arrange sound, and his latest composition, a string quartet, is one example of a more modern style with definite melody but not the kind that’s been played before. He composed it for the Daedalus String Quartet, an ensemble he met at a Chamber Music Yellow Springs concert in 2008, then later worked with while completing his doctorate in composition at the University of Pennsylvania in 2010. They were scheduled to perform the world premiere of his new quartet next weekend as the fourth concert in the CMYS series. However, McCullough himself hasn’t cornered the market on unpredictability in the performing arts.

On Tuesday of last week, the Daedalus informed CMYS that Matilda Kaul, the second violinist, had sustained a shoulder injury, likely from overuse. After returning to her home in Canada for diagnosis and treatment, the group still didn’t know how long her convalescence would be and was forced to withdraw from the engagement. In the meantime, CMYS volunteers contacted five other quartets they thought were strong candidates to perform McCullough’s new work. The Aeolus, a group out of College Park, Md. that won the CMYS competition in 2011, were chosen as a “young and enthusiastic” group who managed to squeeze a Sunday night concert in between previously booked events in Washington, D.C. on Saturday and Monday.

“Ensembles like to do rescues to help each other out, and this is definitely a rescue,” said Jeff Huntington, former CMYS president who is the project manager for the McCullough commission, which was especially sensitive because it was funded in part by a $10,000 grant from the National Endowment for the Arts and a $2,000 grant from the Ohio Arts Council.

“The Aeolus gave a superb performance when they won the competition in 2011, and they were extremely gung-ho about stepping in next month on extremely short notice,” he said.

McCullough is also cognizant of the gymnastics the local community has pulled to come up with, in less than a week, an entirely new arrangement for the April concert. And he was heartened to watch as the CMYS booking committee began combing for substitute ensembles. Many of note, including the St. Petersburg String Quartet and the Ariel Quartet, responded with enthusiasm that spoke loud and clear about the reputation that the little but mighty chamber music series has built over its 30-year history.

“All of these groups either knew of CMYS or had agents who knew of it and really wanted to help them out and be part of it,” he said. “It really is a testament to how great this concert series is.”
The newly arranged concert is now scheduled to take place on Sunday, April 14, at 7:30 p.m. at the Presbyterian Church. The Aeolus quartet will perform McCullough’s String Quartet No. 2, the Haydn Quartet in F Major, Op. 77 No. 2, and the Sibelius Quartet in D minor Op. 56, “Voces Intimae.”

In addition to rescheduling the concert itself, the outreach workshops and lectures that the Daedalus had agreed to are now being fulfilled by McCullough and his sister, Helen (McCullough) Allen, both of whom grew up in Yellow Springs — McCullough graduating Yellow Springs High School in 1996 and Helen Allen graduating in 1993. Allen, a soprano, receives her doctorate in voice from Ohio State University this May and teaches at Otterbein University. McCullough has written extensively for his sister’s range, including a song cycle titled “Franz Kafka: The Way Home and Other Songs for High Voice” and another song cycle based on the brighter poetry of Edgar Allan Poe, such as “To Helen” (as in of Troy). They will hold two demonstration workshops at Yellow Springs schools and Stivers School for the Arts this week, among other events planned for Central State University, Springfield City schools and Otterbein.

According to Huntington, it’s marvelous but hardly surprising that a brother and sister duo from a tiny Ohio town both landed careers in the music profession, a field as difficult to master as it is to make a living from. To begin with, their parents were highly involved in community life, their father, former Greene County health commissioner William McCullough, coaching youth basketball, and their mother, local piano teacher Sarah McCullough, playing piano for Community Chorus and helping to book ensembles for CMYS.

But beyond their immediate family, there is the fact that Yellow Springs has launched dozens of others into musical careers, including many in the classical genre but also in jazz, rock and pop. Huntington, who has been part of the music community here for 40 years, sat down one day last week to count from his own memory how much talent has come from within the village. He came up with just shy of 100 people who either grew up here or worked in music in the village. The famous ones include jazz/rock drummer Cindy Blackman (married to Carlos Santana), Michael Fitzpatrick, personal cellist to the Dalai Lama, Brian Reagan, concertmaster of the North Carolina Symphony, opera singers Roberta Alexander and Joy Blackett, composer/conductor David Epstein, etc, etc.

McCullough got his start at home on the piano under the tutelage of his mother. But his music was nurtured by many others in the village, not the least of whom was high school music conductor Shirley Mullins, who taught him to play the cello. McCullough’s older brother, Prentice, played the cello under Mullins as well.

“My brother always joked that Yellow Springs was probably some kind of government experiment to create a community of the super talented because of the way the arts are nurtured and valued here,” McCullough said.

“This definitely is a special place,” he said. “As a kid you don’t realize it, you just play in the orchestras and you think surely this must happen everywhere. And you quickly find out that it doesn’t. Yellow Springs is unique.”