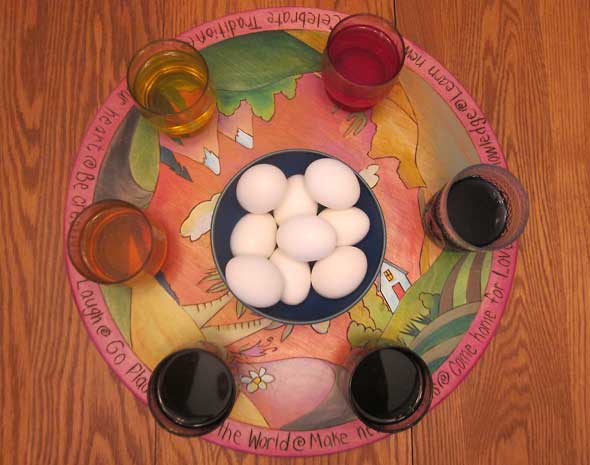 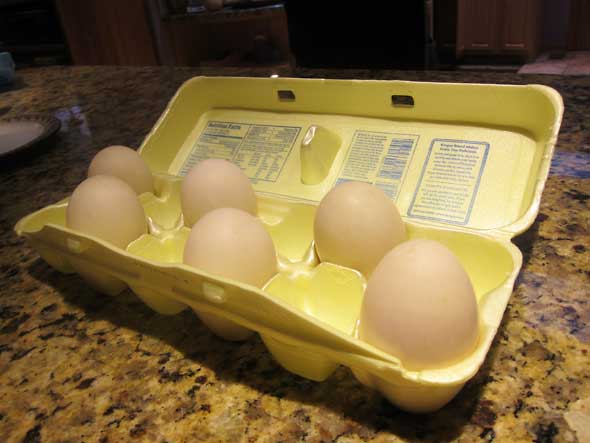 The Yellow Springs Community Library carries lots of wonderful cookbooks. Peter Reinhart’s “Artisan Breads Every Day” is an especially excellent one. The pictures make you want to dive in…tempting the uninitiated to, yes, attempt that splendid baked speciality. Mr. Reinhart wants you to appreciate all the textures of good bread from the tacky dough to the resonating hollow tap of the crust on a finished loaf.

My particular temptation was challah—the traditional bread of the Sabbath. This ambition was at odds with my husband’s for the evening. He wanted to decorate eggs and I soon learned by reading the first lines of the recipe that challah requires a lot of egg yolks. We stock a couple dozen eggs at time but demand for both projects was high. I needed 8 to 10 yolks, the recipe warned, and Jeremy had boiled 9. Did we have enough remaining? Fortunately, we had a half dozen untouched duck eggs which have large yolks, 25-30 grams each. I started cracking. 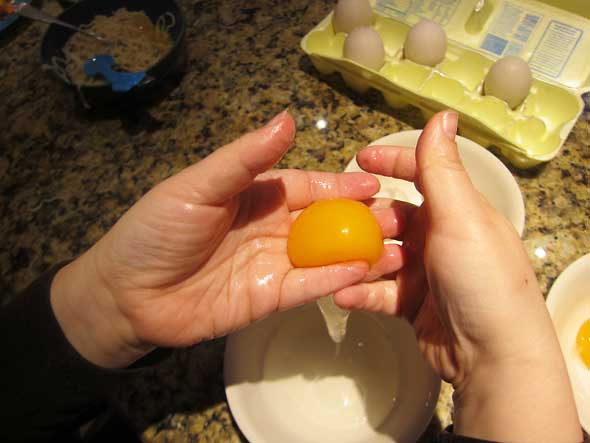 Now, the positive with duck eggs is that their yolks are larger than chicken egg yolks. On the downside, duck whites are ever more clingy. They stick to the yolk, the egg shell, and me with near equal tenacity. Luckily, I rather like this chore—like peeling labels off of purchases—and persisted. The first duck yolk clocked in at 25 grams… hmmm, on the low side of what we need. Happily that yolk was on the low side of what we had. In all, the 6 yolks weighted 171 gram—one more than the recipe prescribed. 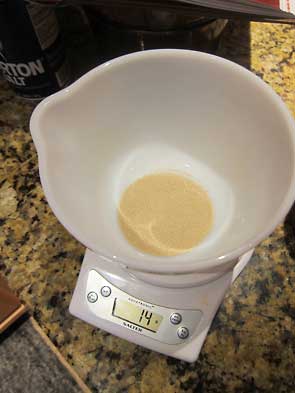 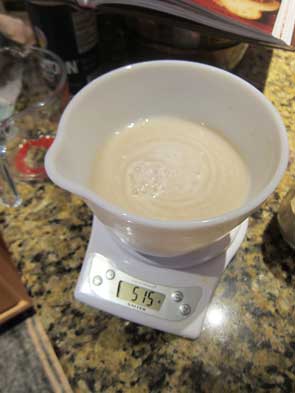 The children were mesmerized by the egg separation process but, on its completion, my husband successfully recruited our oldest to egg decorating. The two of them opened a Paas kit and started portioning out vinegar among the dye cups. 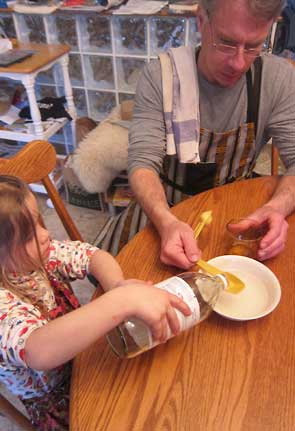 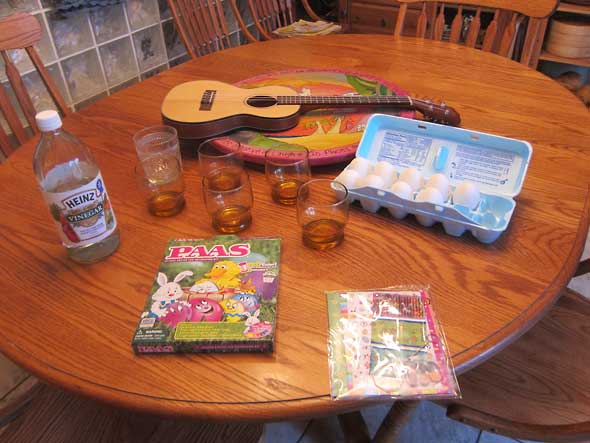 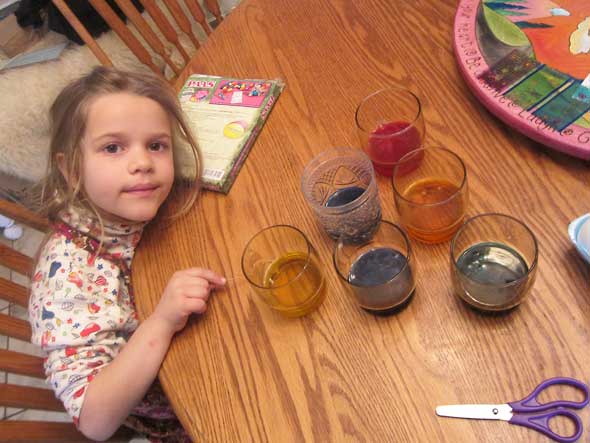 Our youngest stationed himself with me dragging his stool into place. He was well positioned to be of assistance as, for the bread ingredients, I was using a scale instead of measuring cups and spoons. As our son added the bulk of ingredients to our bowl, I fine-tuned the measures that he plopped and poured. The olive oil was the only measure that gave us trouble. Its spout poured slowly and the scale timed out just as we neared the oil’s full measure. Ack! I tipped my wrist one last time then grabbed an empty bowl. On the scale, I replaced the full bowl with the empty, zeroed the scale’s reading, and added the combined ingredients: 14 grams yeast, 510 grams water, 70 grams oil. Sure enough I emptied 595 grams from the full bowl to the empty bowl. My instincts of “enough” were spot on. 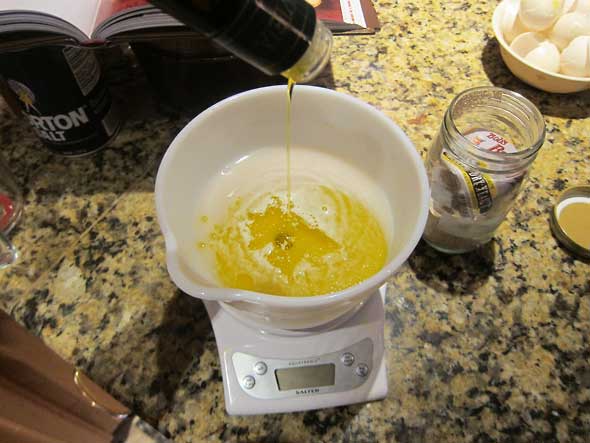 My son had instincts of his own. While I was resolving the weights of the first three ingredients, he turned his attention to the egg yolks. Nearby on the counter, I had left an open bottle of port—the good stuff—and our boy felt its time of purpose had come. I looked up to find him pouring port on our perfectly portioned yolks and—well—I yelped. In the next moment, I was hugging the young man for his cleverness for, in fact, he had just been adding the next ingredient. Though optional, challah includes a full tablespoon of vanilla. Substitute an equal amount of vintage 1994 port in our case. 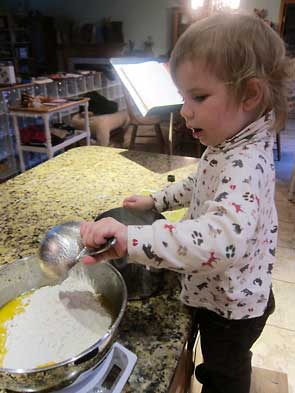 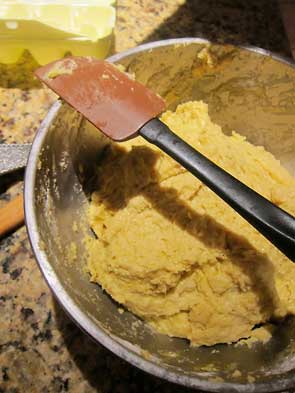 Mr. Reinhart offers mixing instructions for two types of bakers: those with mixers and those who work by hand. I am the later type. I grabbed my largest wooden spoon and mixed the dough ingredients—yeast, water, oil, sugar, salt, flour, and port—for a couple minutes. The dough rests for 5 minutes, and then I stir again with the wooden spoon—its paddle now kept wet to escape the dough’s tacky grasp—for another two minutes. My daughter rejoined us at this point, and the three of us took turns kneading. The dough came together—lovely smooth and strikingly yellow—sure and quick, and I felt like a pro. We formed our dough ball and, as instructed, put it in the refrigerator to ferment overnight. 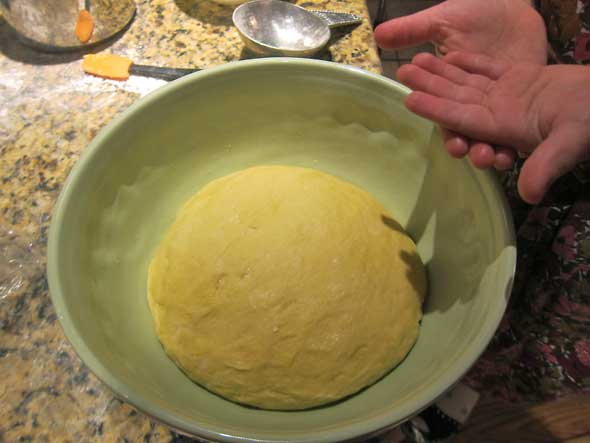 The family could now turn in full to the evening’s egg decorating. We decided on egg dying and magic markers. Next time, we’ll know better to dye first and draw second, but we had great fun. 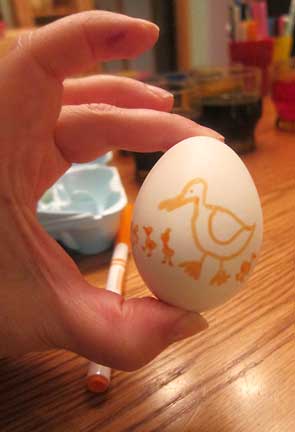 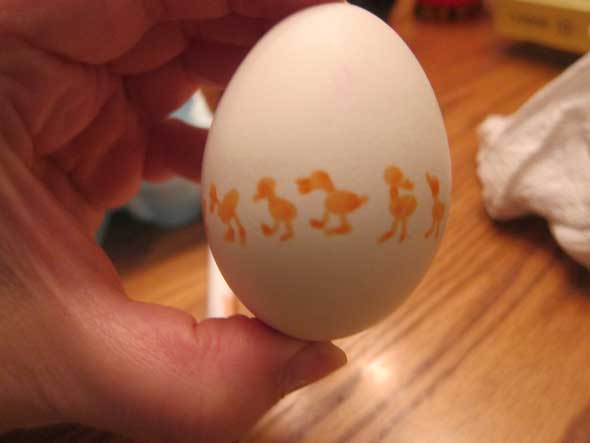 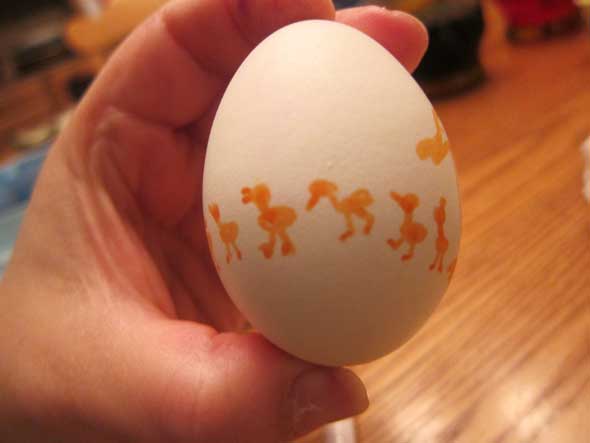 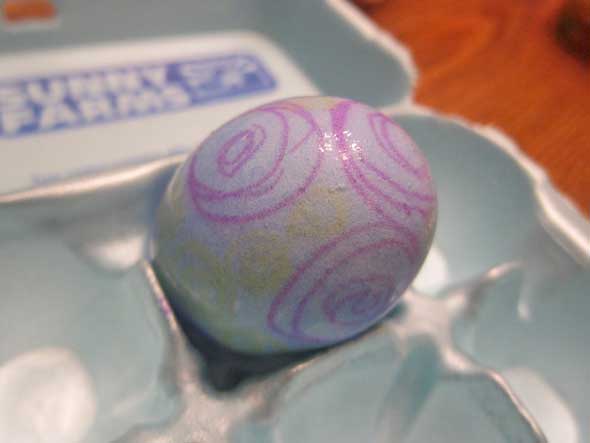 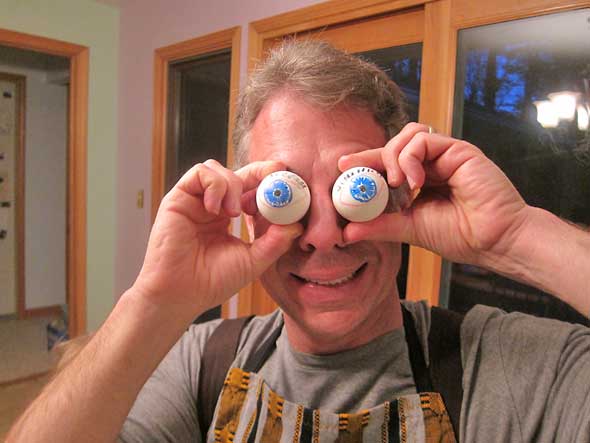 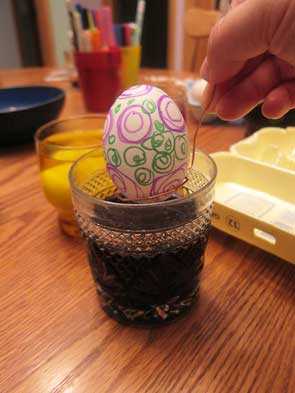 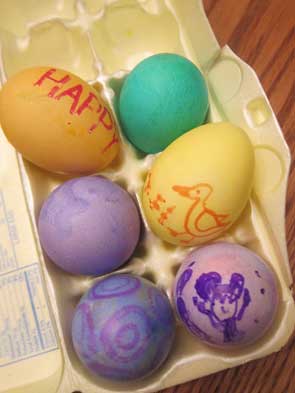 This morning we woke up and took the challah dough out of the refrigerator to rise. After the dough rose for 80 minutes, my daughter and I set about figuring out how to braid it. We opted for a three strand braid and crossed the braids underneath each other to pull them tight. 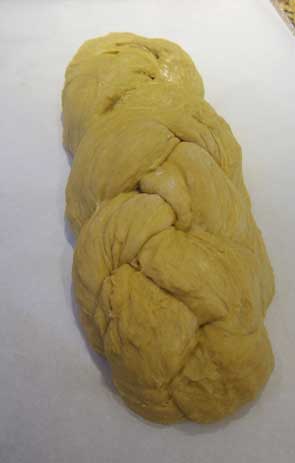 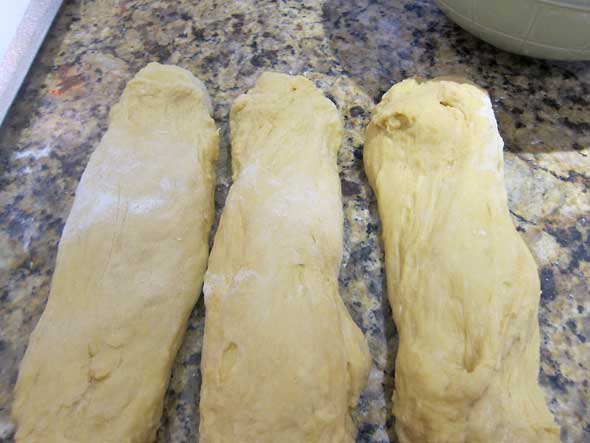 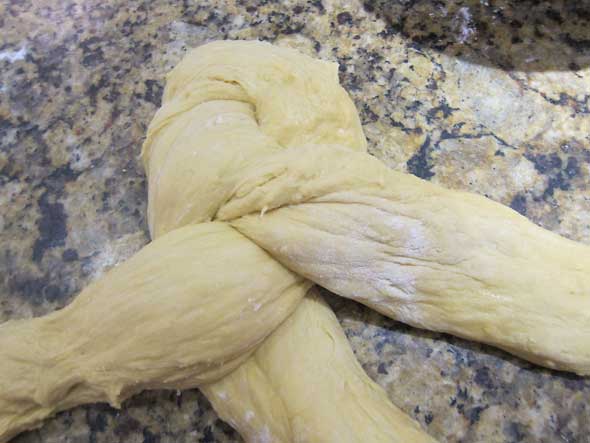 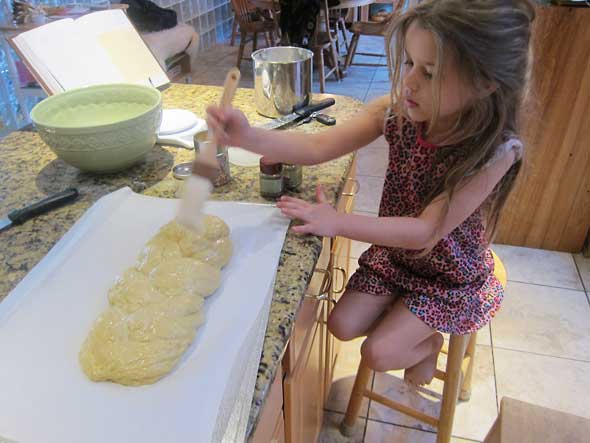 While the braided dough rose for an hour, my daughter gave it a couple of coats of egg wash. She and her brother then added the sprinkles. The recipe calls for seeds, but my daughter lobbied hard for something prettier. She selected poppy seeds and Mukhwas, the colorful Indian after-meal mix of fennel and peppermint. I was skeptical that the candied fennel seeds in white, orange, and pink would survive the hour in the oven, but her instincts proved way better than mine here. 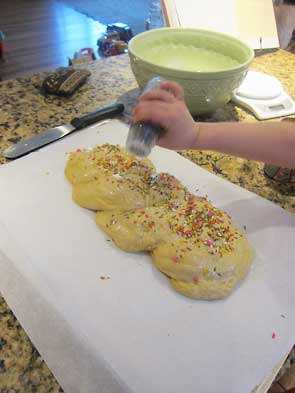 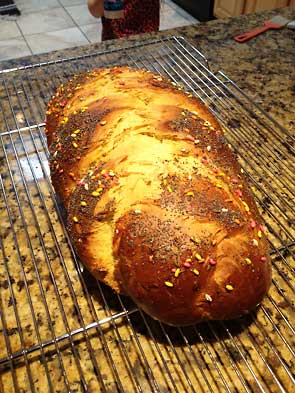 In retrospect, I suspect that Mr Reinhart’s recipe supports the double loaf tradition. The final loaf came out of the oven a full half hour later than the recipe specified, and it was huge. Still we were all surprised by its beauty, its golden crust, and its lovely aroma. We look forward to cutting into it and enjoying the secrets of its center.