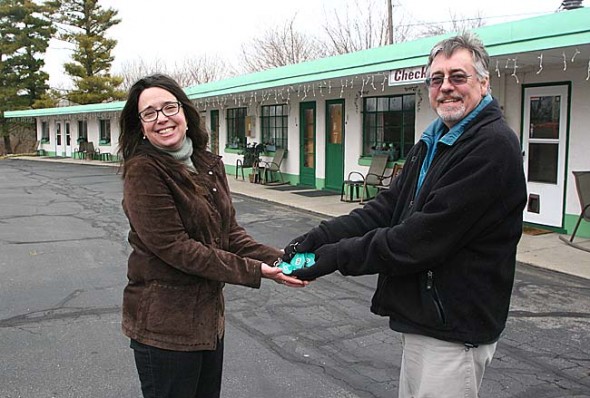 On March 1, Eric Clark handed over all the keys to the Springs Motel he owned for 10 years to Kat Krehbiel, who owns New Liberty Farms on Meredith Road. (Photo by Lauren Heaton)

The charm of the little roadside motel that attracted Eric Clark 10 years ago has hooked a new buyer with an eye for potential. Kat Krehbiel purchased the Springs Motel last week and has plans for its continued revival, possibly including a new place to eat on the south end of town. But to start out, Krehbiel’s main hope is to keep her first motel business alive and well.

“Eric has built a wonderful business and it’s already running smoothly — my job is to figure out how to enhance it,” she said this week.

Krehbiel lives in Yellow Springs and for the past five years has operated New Liberty Farms, a local vegetable, egg and livestock farm on Meredith Road. Her long-term vision for the farm business, which raises historic, genetically diverse breeds of chickens, pigs and cattle, has been to create an education program that teaches people how to be food- and energy- independent. And she always knew she wanted accommodations for people who come to take workshops and classes on self sufficiency.

“Now I have a place to house people,” she said.

But first she has a few other ideas to set in motion at the motel. First off is bringing in Seven Hills Coffee from Cincinnati for the motel’s continental breakfast. It’s a coffee she would like to drink and it will be blended just for Yellow Springs. Next is changing the cleaning products to non-toxic, biodegradable solutions and then opening them up for sale to the wider community.

And even bigger in scope is bringing a new food cart to the motel to feed anyone who misses having a restaurant on the south end. From the (New Liberty) farm to the parking lot, she hopes to use some of her local produce and meats as ingredients in the breakfasts and lunches she’ll serve from the food cart.

“It will be a healthy local food alternative for all the people on the south end of town,” Krehbiel said.

Krehbiel and Clark will spend the next few weeks working on transitioning the business, which Clark wanted to pass to a local person, he said this week. He cares about the business he worked hard to build, and he wanted someone who understood why “a typical franchise hotel wouldn’t work here,” he said.

When Clark purchased the Springs Motel in 2002, “the place was a pit,” he said this week. But even with the chipped paint and derelict appearance, the motel had charm, he said. He knew Doug and Marty Gasho who built the motel in 1956 and still lived across the street. And Clark saw a need for a comfortable place that anyone could afford to stay for a few nights in the village.
His plan was to live in the residence suite for two months while he fixed it up from a “place of hourly business” to a modest cozy ammenity, and then hand it over to a residential manager. But he soon found he couldn’t leave.

“I loved it out there with all the deer and the owls and foxes,” he said. “And it appealed to every part of being fidgety.”

Clark and his son, Lonya, lived there for seven years while he replaced windows, added the motel’s first phone lines, repainted, scoured bathrooms and floors, and gradually installed a gazebo, a playground, a mural and most recently a rooftop solar array that powers 20 percent of the building’s electric need.

“We made it so it wasn’t just a place where you had to stay but a comfortable place you want to be,” Clark said.

And people do want to be there, especially in the summertime, when the motel gets 85 to 90 percent occupancy rates. While the winter time “runs a lot less than that,” Clark said, business has been very consistent, especially since Antioch College reopened. The other bed and breakfasts operating in the area, including the Arthur Morgan House B&B, Grinnell Mill B&B, Yellow Springs Country B&B and Glen House B&B, have helped to bill Yellow Springs as a real destination and bring more patrons to the motel.

“The lodging industry is one of those, ‘if you build it they will come,’” he said. “And the more people say Yellow Springs is a destination, the more in demand we are.”

The numbers bode well for Krehbiel, who hopes to bring all her different jobs together to create something that’s good for the community and good for society in general.

“I’m hoping to breathe some life into that end of town,” Krehbiel said. “Eventually I hope people will be saying, ‘you’re getting lunch at the motel, right?’”