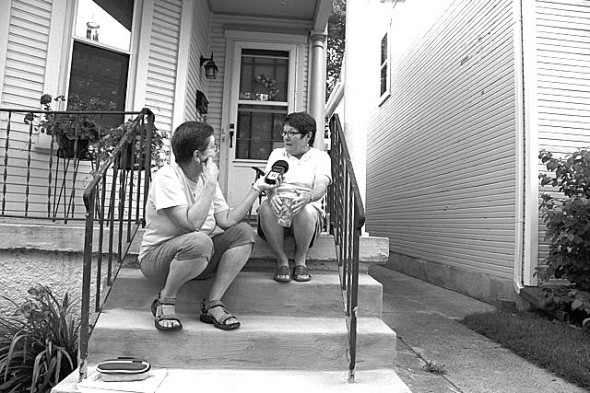 ReInvention Stories, a collaboration between WYSO public radio and local filmmakers Julia Reichert and Steve Bognar, uses video, radio and interactive online media to explore how Dayton is re-charging itself after years of economic collapse. Guided by two fundamental questions, “How does a city of inventors reinvent itself?” and “How are people starting over in these tough times?,” the project looks for answers in the stories of Daytonians, characterized by Reichert as “regular people” who are just trying to get by. With Dayton named “America’s fastest dying city” by Forbes magazine in 2008, the project’s producers wanted to understand how such a situation affected the city’s residents.

“We really wanted to just document this period and find out how people are coping,” said Neenah Ellis, general manager of WYSO.

They answered the question by creating a team of community producers who spent last summer walking the streets of Dayton, looking for potential interviewees. Armed with recording equipment, a basic interview guide, a neighborhood map and a bottle of water, 20 community producers approached anyone they saw in the neighborhood. Over the course of the summer, the team managed to record and cut 70 different interviews, which are being turned into short radio pieces, accompanying short documentaries and longer film pieces for the interactive website.
“Basically we wanted to know: are we reinventing or not?” explained Reichert. “We really didn’t know what the feeling was going to be in Dayton.”

Funding the project was a Localore grant from the Association of Independents in Radio, and WYSO was one of only 10 stations in the country to receive the grant. Ellis chose Bognar and Reichert, Emmy-winning documentarians, to work on the project due to their expertise and connection to the community.

“I wanted to work with Steve and Julia because they have a passion for WYSO, they’re fabulous teachers and they’re so good at what they do,” she said.

When asked about the team’s experience in approaching strangers, Reichert said she was “surprised by how friendly people were. People would at least listen to us and shake our hand,” and some were willing to share their story on the spot. It was also clear the topic had hit a nerve. When explaining ReInvention Stories, the community producers would mention how hard hit Dayton was by the recession and “heads began to nod.”

“Everybody knew what we were trying to do,” recalled Ellis, and virtually everyone had a story about how the poor economy has affected either their own lives or someone they knew.
Reichert was also surprised by just how much is happening in Dayton and the strength of many of its residents.

“The key word is resilience,” she reflected. “People are resilient and they don’t give up.”
She also noted that many of those who have successfully “reinvented” themselves did so with community support.

“It’s not the go-it-alone, American cowboy or cowgirl — the people who are successful reached out for help,” she said.

Similarly, Ellis appreciated the number of people who characterized their struggles in terms of opportunities,

“Some people would say, ‘I had to start over, but it gave me a chance to do something new,” she said. “They realized their dreams.”

One such person is Debbie Bradley, who worked at a GM plant for 13 years before it closed. In a radio piece she shares that, even though she had always been drawn to professions in the healthcare field, she chose factory work because it meant she had “a job for life.” After the GM plant closed, she studied nursing at Sinclair Community College and has since become a registered nurse. Because of her previous production, the documentary The Last Truck: Closing of a GM Plant, Reichert belongs to a Facebook group of workers laid off from the plant and Bradley’s story generated a lot of conversation for the group.

“One woman, who I guess had started [at] Sinclair but never finished, wrote ‘I am going to finish Sinclair since I heard your story,’” recalled Reichert.

Indeed, the online response to the stories WYSO has aired so far demonstrates both the relevance of ReInvention Stories and the power of social media. According to Ellis, WYSO has seen a “phenomenal increase in unique visits to our website,” and some of the enterprises the interview subjects are involved with have received more attention since their stories aired. Supporters and patrons of Angie’s Firehouse Tavern linked owner Patrick Reed’s story on their Facebook pages, sharing it with hundreds of people. Ohio’s first cooperative brewery, The Fifth Street Brewpub, was featured in the first story to air and it has seen increased traffic on its website.

While the radio pieces have generated considerable interest, both Reichert and Ellis hope the launching of the new interactive website, http://www.reinventionstories.org, will have an even greater impact. The website is divided into three segments, with each segment going live at a different date. The first segment, which launched this past Tuesday, features in-depth video interviews with seven different Daytonians, an interactive street view of the city and an interactive question and answer page.

On the street view, visitors move along footage of Dayton’s streets — which many people tend to characterize as “dead” — and occasionally an image pops up. Clicking on the image, you see footage of different events in the city: a performance of the Gay Men’s Chorus, for example, or “The Blessing of the Bikes,” during which motorcycles are blessed by clergy. The design challenges the negative perspective many people have of Dayton while also taking visitors on a kind of tour of the city.

On the question and answer page, questions like “What’s your favorite place in Dayton?” and “What Dayton event do you most look forward to?” appear, and visitors can both answer them and see others’ answers. Again, this method contests the image of Dayton as a “dead” place, while also being informative: by clicking on others’ answers, one can learn about new events and venues in the area.

The next two segments, set to go live in March and April respectively, follow the same format but are guided by distinct overarching questions. While the first piece deals primarily with Dayton as it is now, the other two pieces encourage users to envision a different Dayton and consider how they might contribute to that goal.

In many ways, the theme of reinvention can also be applied to the producers’ own experiences in creating this project. Although integrating the web into public radio is “topic A” in the public radio community, according to Ellis, relatively few stations have found ways to do so effectively. Indeed, when the project started, the team at WYSO had little to no experience with filmmaking, Reichert and Bognar had worked very little with radio and neither partner knew much about web design.
“We didn’t know how to do this,” said Ellis, referring to the multimedia, interactive website they’ve created.

Although the production team knew from the outset they were going to use video and radio and have some kind of web presence, the depth and interactive nature of the project is something that has evolved over time, with Zeega, a company “dedicated to inventing new forms of interactive storytelling” assisting with the technical aspects of the site. A grant from the Yellow Springs Community Foundation also helped in the creation of ReInvention Stories, providing funds for the multimedia editing lab WYSO created for the project.

“This project has moved us firmly into the realm of being a multimedia organization” said Ellis. “It’s an opportunity to collaborate with media makers of all kinds.”

While the expansion of WYSO’s multimedia capacity has certainly been valuable- — and will create opportunities for more collaboration with independent media producers in the future — the community experience has been particularly memorable for both Reichert and Ellis.
“It’s been an amazing year in terms of learning about our community,” reflected Reichert. Ellis agreed, saying that after walking the neighborhoods and interviewing residents, “Nobody on our staff is going to think of Dayton in the same way again.”

Visit the interactive site at http://www.reinventionstories.org. Radio stories and short video documentaries can be found at http://www.wyso.