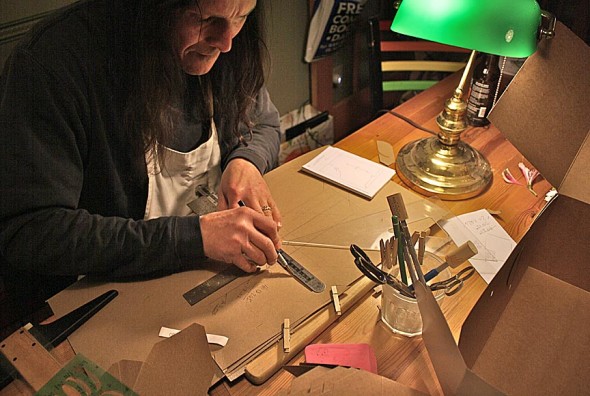 Case Pappendeckel modifies a take-out box template for The Breezes in his Yellow Springs studio. See more photos in the gallery below. (Photo by Mite Mindless)

For an arts village that prides itself on thinking outside the box, a recent newcomer is living the dream thinking entirely within the box. The packaging box, that is.

Case “Pappi” Pappendeckel, who moved to the village at the end of last year, has been pursuing a craft that, like so many others, has been sidelined by modern technology: the artisan packaging box.

Pappendeckel, who hails from Germany, insists his work is valuable, even though, at 50 to 100 boxes a week, he can’t easily compete with the standard factory-made boxes that sometimes reach one million units in the same timeframe.

“It’s difficult, convincing potential customers to purchase handmade packaging at $2 to $4 a unit when they could get a box for a fraction of that cost.”

But, he says, a lot of value lies in the initial perception. “Packaging is everything. It says, ‘here’s what I think of my product.’ If [a retailer buys] a cheap box, even the best handmade truffles will come off looking cheap. In retail, people do judge a book by its cover. And even though it’s hard work, my packaging says you care.”

Pappendeckel’s hard work seems to have paid off, in his coming to the village at what he feels is “just the right place, at the right time.”

“There’s the local movement, the sustainability movement and the artisan movement. All these things have paved the way for me to make an acceptable living doing what I do.”

Two of his clients are Kurrent Kitchen and The Breezes. “Kurrent was my first job. They needed cake boxes — one size, relatively straightforward, you know, a folding box with a flap. The Breezes…” Pappendeckel stops to reflect for a moment on the assingment. “They wanted something different, something angled. Something that says ‘take-out’ without saying ‘throw-out!” The resulting piece uses an earth-tone natural-grade fiberboard which gracefully slopes outward from a sturdy base. “I love the way it looks and feels in your hand. It’s my favorite so far.”

And none of Pappendeckel’s boxes use glue, he states with pride. Many people are convinced that food tastes better out of his take-out containers, and some in the artisan box trade point to recent scientific evidence that commonly used glues are highly carcinogenic and mutagenic.

“That goes for paraffin wax, too,” Pappendeckel says about the waxy lining used to moisture-proof take-out containers. “I use beeswax to seal the fiber. Local, of course,” he adds. “I’m working on sourcing the fiber locally, too. But it’s still a long way off to get quality fiber.”

But there may be a new source of fiber in the works. In one of his recent experiments, Pappendeckel repurposed a giant paper wasp nest he found in shrubbery just outside his studio. “I had to wait until winter so that I could get at it. I didn’t want to deal with displacing the insects.” He notes the striated layers make for a particularly beautiful effect, “especially when they run diagonally.” The fiber, of course, is all local, produced by nature, recyclable and entirely sustainable. “I have high hopes for paper wasp packaging.” he says.

Pappendeckel’s work can be taken home with leftovers from local eating establishments and found in dumpsters and trash cans all around town. 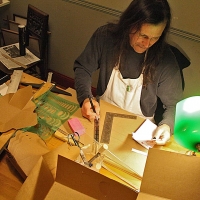 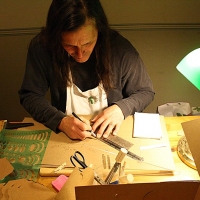 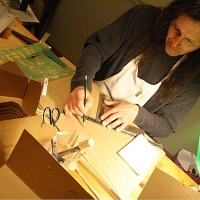 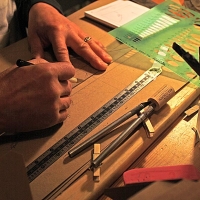 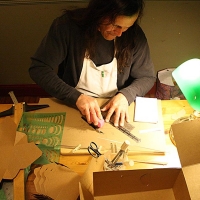 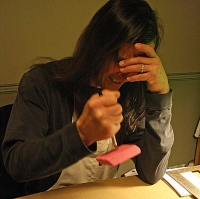 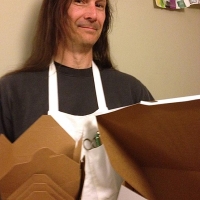 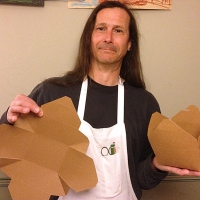