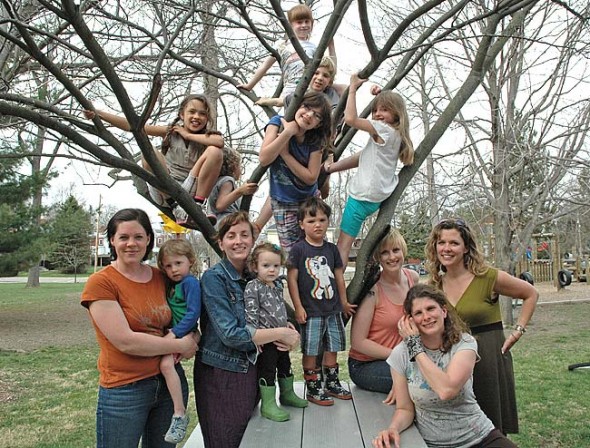 These moms and kids, along with the rest of their families, are among those who will attend Tar Hollow on May 17–19. Pictured on the Mills Lawn playground are, from left in front, Eden Matteson with Violet; Victoria Rowe with Ainslie; Matteo Basora; Corrie Van Ausdal; Karla Horvath; and Alice Basora. In the tree are, from left clockwise, Carina Basora; Tiger Jane Collins (top); Jack Horvath; Hayley Rowe; Ashlea Rowe; and, turning away, Teddy Horvath. (Photo by Diane Chiddister)

Tar Hollow is a place for friends

When Corrie Van Ausdal attended Tar Hollow as a child with her family, she felt as if everyone in Yellow Springs was staying in the rustic cabins perched on a hillside at the state park south of Chillicothe. Tar Hollow was a once-a-year place where kids felt giddy with freedom but still safe under the watchful eyes of everyone’s mom and dad. It was a place where time slowed down so much that “a weekend felt like a month.”

“I did so much with my friends, from the time I woke up until I went to sleep,” she said in an interview last week.

Eden Robertson Matteson was an infant when she first went to Tar Hollow with her parents, Kathy and Dick. Like Van Ausdal, she grew up knowing that the third weekend in May meant going to Tar Hollow, where she and her friends would roller skate and play Four Square in the lodge, swim and canoe in the lake, and spend much of Saturday scheming to create “a ridiculous children’s skit” that they’d perform for the adults that night.

Van Ausdal and Matteson loved Tar Hollow so much as kids that, now that they’re mothers themselves, they want to provide the same joy to their children. They plan to be at Tar Hollow the weekend of May 17–19, and encourage other young village families to join in.

“We want to be on the crest of a new wave of young families” who go camping to Tar Hollow each May, Van Ausdal said.

Even though it’s organized by the Unitarian Fellowship, Tar Hollow is an event open to the whole community, according to longtime organizer Hardy Ballantine.

“This is a Yellow Springs activity,” he said.

In its 49th year, Tar Hollow has obviously been a success.

“We have a lot of fun,” Ballantine said. “It’s a nice way to get into the country and still be together.”

While Tar Hollow includes some traditional activities, such as an optional Saturday morning wildflower walk and talent show and bonfire that evening, the event is mainly unstructured. Consequently, Ballantine said, the adults end up spending time with those they might not otherwise, getting to know each other.

“It’s a chance to be with the people you might see around town but don’t talk to,” he said.

Tar Hollow begins on Friday evening, about 4 p.m., when the group converges on the state park. (This year organizers have revived the popular tradition of taking a bus to Tar Hollow, with Doug Roberts driving.) Everyone is assigned to one of the cabins that sit on the hill above the rustic lodge and also to a work activity, such as preparing a meal or cleaning up. On Saturday and Sunday, people walk in the woods, canoe or kayak in the lake or just sit in the lodge and chat with others. Kids tend to roam together under their parents’ watchful eyes, and adults have time to themselves.

And organizers emphasize that Unitarians do not have a religious doctrine, but rather focus on kindness, tolerance and social justice. The Tar Hollow weekend includes no religious ceremony, Ballantine said.

As befits an event that seeks to attract young families, Tar Hollow is a bargain. The fee is $40 for those 12 and up, $30 for children 3 to 12 and free for kids under 3. (These fees include all meals and cabin charges. Those who wish can bring tents instead.)

Ballantine and his wife, Jeanne, began going to the Yellow Springs Unitarian gathering when their family of three children was young, seeking a place of more intimate relation within the wider Yellow Springs community.

Van Ausdal and Matteson, who both graduated from Yellow Springs High School in 1995 and in recent years moved back to the village, want the same for themselves and their children.

“I’m looking for something more intimate where I can build community for the kids,” Van Ausdal said.

She and Matteson are finding that community in the Unitarian gathering, where other new young families are getting involved, and where in recent years, there’s been a dearth of families with children.

“Now we’re getting the next generation,” Ballantine said. “It’s good to see that coming back.”

Other families new to town and recently involved with the Unitarians are Alice and Mario Basora, along with their two children. They also plan to attend Tar Hollow, for the first time this year.

“I’ve heard so much about it,” Alice Basora said. “It sounds like a fun weekend in the woods.”

For Karla Horvath and her husband and two young sons, “It seems like a good kick-off to the camping season. And I like having time to hang out with more people.”

Victoria Rowe has never been camping, but she and her family, including her three young daughters, are gearing up to head to Tar Hollow.

What all the women have in common is having moved to Yellow Springs fairly recently. Basora and her family moved here from the Cincinnati area several years ago when her husband, Mario, was appointed superintendent of schools. Horvath moved from Virginia when her husband, who works at Trader Joe’s in Dayton, noted that all of his favorite customers lived in Yellow Springs, and perhaps it would be a good place to move the family. And the Rowe family was living in Beavercreek but feeling out of place in suburbia when they decided to try Yellow Springs, where she is now a baker and caterer and her husband is a bartender at The Winds.

Matteson and Van Ausdal are part of a wave of 1995 YSHS graduates who moved away for many years and then, when they began having children, decided to come back to their hometown. Matteson was a midwife in the New York City area before she and her husband, Kevin, now an administrator at Miami University, moved back two years ago with their children. Van Ausdal was active in theater in Kansas City and her husband, Matt Collins, was a professional photographer before they moved back to town a year ago, right before their daughter, Tiger Jane, began kindergarten at Mills Lawn School. Another good friend and classmate, Hillary Skea Lee Peirson and her husband, Ryan, moved within the last year, and another friend, Naomi Sikes Bongorno, will move with her family from Cleveland this summer.

According to Van Ausdal, it was her friend Naomi who described the common desire the good friends shared.

“She said it’s like the urge of sea turtles, to return to their native shore,” Van Ausdal said.

And now they’re immersed in meeting other young families, with Tar Hollow an opportunity for everyone, young and old, to come together over a weekend in May.

Those interested in attending Tar Hollow can access a registration form by emailing ystarhollow@gmail.com. Completed forms and fees are due by Monday, May 6.