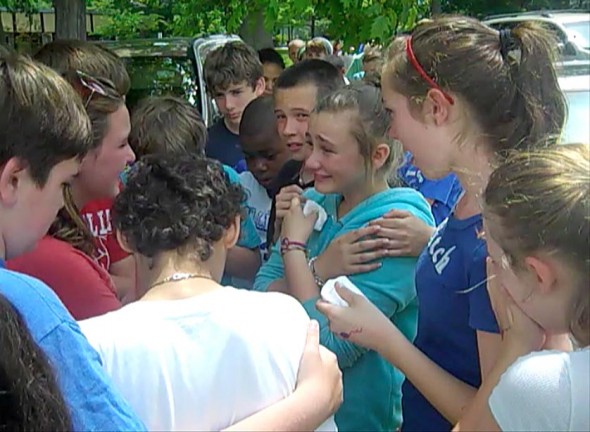 The Mills Lawn School sixth grade clap-out can be an emotional experience for those moving on. (Photo by Matt Minde)

It happens each year around the very start of summer. For the younger residents of the school, it’s just the end of another grade. For the oldest, it’s the end of a world they’ve known since kindergarten. The all-school clapping out of the sixth grade parades the parting students, gauntlet-style from the first- and second-grade wing, ’round the main foyer corner on to the third and fourth grade wing, finally through the library to the far rooms of the fifth and sixth grades. There, they congregate in a chaotic, sniffling, babbling bunch, mixed in with parents, teachers and other well-wishers. They sort out their belongings, breaking up in groups of two to four, hug, laugh, cry, wander around a little lost, maybe. The whole thing is over in no more than five minutes.