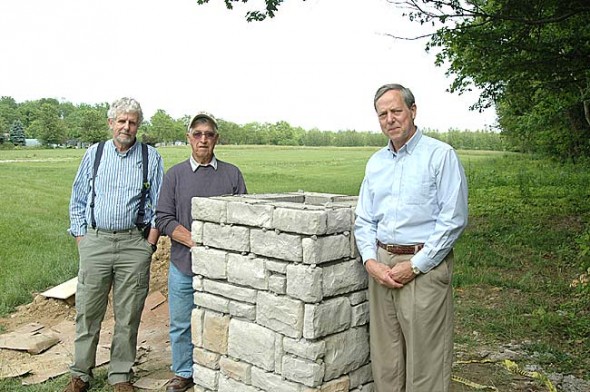 When the Glen Forest Cemetery Association dissolved earlier this year it transferred ownership of the village cemetery to the Miami Township Trustees. Pictured are former Association members, from left, Rod Hoover and Don Fulton with Trustee Chris Mucher in front of the expanded cemetery lot across U.S. 68 from the original one. (Photo by Lauren Heaton)

At the northern edge of the Glen Forest Cemetery stands a grave marker for Colonel M. Thomas Tchou, former secretary to Generalissimo Chiang Kai-shek of the Chinese Army. There are markers for Campbells and Beckwiths, Howards and Hands, one in every corner for Drake, and a stone in the shade of a catalpa named for a baby who died at birth. The number of markers has been growing since the cemetery’s inception in the 1820s. And having nearly reached capacity, the Glen Forest Cemetery Association that has managed the property since 1921 transferred ownership earlier this year to the Miami Township Trustees.

As the new stewards of the village’s most visible cemetery (the Catholic Cemetery is set further back on Fairfield Pike), the trustees began immediately preparing the property across the street on Xenia Avenue for more gravesites. The new property, which is a little bigger than the first, was purchased and surveyed by the association in the 1970s. But having no available cash to develop the property, the association members agreed last year after 92 years of private stewardship that it was time to turn the cemetery over to a public body. The cemetery association’s former treasurer, Perry Stewart, for one was greatly relieved that a system is now in place to care for the community’s burial needs in perpetuity.

“The [Glen Forest] trustees were getting long of tooth, and there was no system for restocking them,” Stewart said last week. “The best thing for our community was for the Township trustees to take over for the long run — because cemeteries are for the long run.”

According to Ohio law, when a cemetery association dissolves, its ownership is automatically transferred to the township. But Stewart, whose family started Miami Deposit Bank (now US Bank) and raised him to be a fastidious record keeper, long ago learned that as a steward of any business or organization, one has an “obligation to see that things continue after you’re gone.” The other Glen Forest Association Trustees Alice Allen (president), Rod Hoover and Donald Fulton felt the same way.

So on January 1, 2012, the 750 grave sites in the 5-acre cemetery were transferred to the trustees, along with the $90,000 left in the association’s trust (which could only be liquidated if the association dissolved.) And soon after, according to Trustee Chris Mucher, the Township began preparing for a slightly different operation across the street, where a whole new field, the third of its kind in Ohio, is being prepared for the rest of us. The first three acres of the field will look more or less like the original cemetery, with enough space for 900 markers, some trees and a few roads. And the back three acres will be reserved for natural burial.

The concept will look just as it sounds: low-density burials with natural stone markers or none at all, and lots of prairie grass and wildflowers marked by paths to each site. The natural burial plots prohibit embalming and only allow biodegradable caskets without the concrete vault often included in conventional burial.

While traditional sites cost $650 per site, the natural burial plots are expected to cost about $1,200, Mucher said. The cost is higher because of the lower density of the burial, but Mucher believes it’s a good fit for the town.

“I think Yellow Springs will embrace the idea,” he said.

The Township operates the Clifton Cemetery as well, and the Trustees hope the dual operation can benefit from some economies of scale. While the association contracted out the cemetery maintenance to Pat and Janine Partee, the Township’s Dan Gochenauer will now manage the care for all three properties. Mucher estimates operating costs, which until now have totalled just over $20,000, could be cut by as much as 30 percent. And while the trustees will spend close to $60,000 to develop the new cemetery and repair tombstones in the current one, there will still be funds leftover to help pay for increased maintenance activities, Mucher said.

One long-term possibility for the natural cemetery is to exercise a current option to purchase a five-acre lot at the very back of the new site to install a forest cemetery, using trees as memorial markers. The forest sites would be even larger than the prairie sites, and the kind of trees, which have not been identified yet, will be chosen with advice from the local tree committee, Mucher said.

In the meantime, the Township has already installed a new sign at the old Glen Forest site advising visitors of the regulations, which include keeping flowers and planting off the main pathways and removing them within a week of placement. The sign also directs readers to the new property managers, the sexton at 477-0597 or the trustees at 767-2460, for any questions.