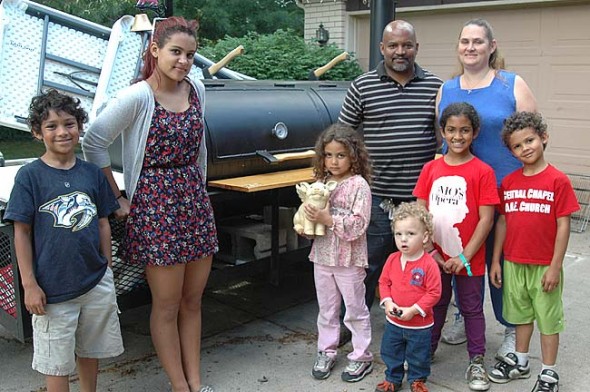 Everyone in the Williams family, including, from left, Judah, Shekinah, Hadassah, Tomaz, Agustus, Zoe, Margaret, Elijah and Jenesis (not pictured), will contribute to this weekend’s launch of Pig Wings Barbeque, a food cart business that will be stationed at Village BP Wednesdays through Sundays. (Photo by Lauren Heaton)

For Tomaz and Margaret Williams, ministering and cooking have a lot in common. Both are about service and supporting others, and for the Williams with seven children, as with everything they do, both are a whole family affair. So it was a natural transition when they went from ministering in Florida a few years ago to this summer opening Pig Wings Barbeque, a food truck business whose grill will be smoking hot at the Village BP lot all summer long. The grand opening is this Saturday at Street Fair.

Tomaz Williams’ barbeque recipe is a family secret. The first part was getting the pit right. Williams custom-designed his reverse-flow barbeque to slow cook the meat using only the smoke from the apple wood and hickory wood he uses. His kitchen on wheels has many sinks, a storage/freezer unit, two large gas burners and a pit large enough to accommodate the whole pig he cooked for a high school graduation party last weekend. Williams smokes the pulled pork, ribs, and his signature pig wings for about 16 hours until the meat is tender and filled with a mature smokey flavor, he said.

So just what are pig wings?

According to Zoe, the 10-year-old counting whiz who handles all the cash, pig wings are the shank of the pig that comes with an exposed rib that can be used as a handle.

The second secret to the barbeque is in the sauce. Williams’ father was friends with Gabby Mason, whose home barbeque was well known throughout Yellow Springs in the 1970s. Williams’ sauce was adapted from that time, and the family has been serving it on their grilled and smoked meats ever since.

“We still have his index cards,” Shakinah, the oldest, said of her grandfather’s recipes.

Tomaz’s family came to Yellow Springs in the 1950s seeking greater opportunity for blacks than segregated Dayton could offer at the time. His father got a job at Wright Patterson Air Force Base, and one of his sisters graduated from Antioch College. But they also found causes that needed to be fought here in the village, such as the Gegner Barbershop protest in 1964 that galvanized a push for equal rights in the downtown.

At home, Tomaz was one of nine children who all had to pitch in to make big family dinners. And by the time he graduated Yellow Springs High School in 1982, he knew how to prepare large amounts of food for a crowd. While pastoring in Florida, his food was always in high demand, and when the family returned to the area five years ago, they began thinking of how they could turn that service into a business.

The family is busy, and everyone is involved in other activities in and around the village. Williams now works at Antioch College, and he and Shakinah coach bronze cup soccer, which involves quite a number of the family’s children. Shakinah and Zoe are involved in YS Kids Playhouse during the summers, and the family still does some pastoring at A House of Prayer in Xenia. But Tomaz and Margaret feel ready to throw more energy into the food-cart business, and the rest of the crew, including Shekinah, Jenesis, Zoe, Judah, Elijah, Hadassah and the couple’s adopted nephew, Agustus, plan to help make it a success.

The kids are already helping to prep the veggies, spread rub on the meats, serve the food and take and count the money.

“The only thing they aren’t going to do is play with the food,” Williams said.

Pig Wings Barbeque will be open at BP from Wednesday through Sunday each week, from 11 a.m. to at least 6 p.m. In addition to meats, the business serves a vinegar-based cole slaw and Cuban-influenced vegetarian rice and beans, both family recipes as well, Tomaz said. Pig Wings plans to have six butts of pork ready for this weekend — that’s about 70 pounds of meat — so they hope their customers come hungry.