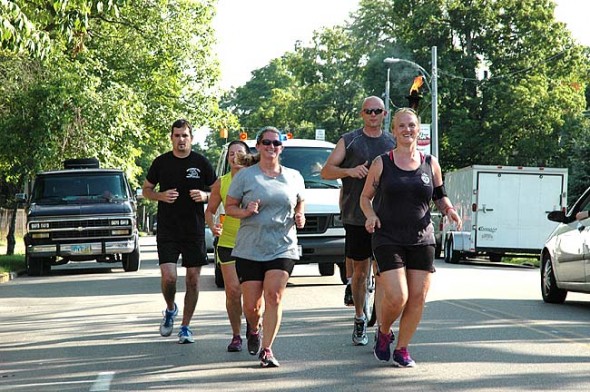 The “Flame of Hope” was carried through Yellow Springs yesterday, one of over 150 communities, to create awareness of Special Olympics and raise funds for the program. (Photo by Matt Minde)

Yesterday evening, an entourage of five runners, escorted by a phalanx of police vehicles, ran the “Flame of Hope” for the Ohio Special Olympics Law Enforcement Torch Run through town, on their way to Columbus.

The torch is carried through over 150 communities via five main routes, creating awareness of Special Olympics and raising funds for the program.

The Law Enforcement Torch Run is the single largest year-round fundraising event benefiting Special Olympics Ohio. The annual intrastate relay and its various fundraising projects have two goals: to raise money and to gain awareness for the athletes who participate in Special Olympics Ohio, along with providing officers visibility while giving back to their respective communities.

The Torch Run culminates in the Final Leg coming into Jesse Owens Memorial Stadium on the Ohio State Campus in Columbus to pass the “Flame of Hope” to the Special Olympics athletes and signifies the official start to the Summer Games.