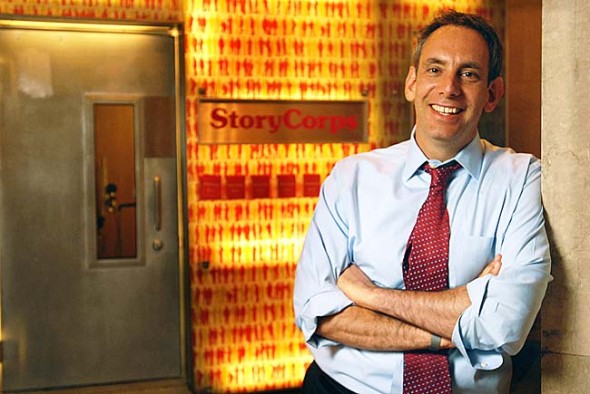 Dave Isay, the founder of StoryCorps, will be the featured speaker at the Schuster Center in Dayton on Friday, June 21, at a fundraiser for WYSO Public Radio. (Submitted photo by C. Harvey Wang)

On Friday, June 21, WYSO will host David Isay, the founder of StoryCorps, at the Mathile Theater in the Schuster Center. His presentation, “The History of StoryCorps and the Power of Listening,” will serve as a fundraiser for WYSO.

Founded in 2003, StoryCorps collects and archives the personal stories of regular citizens all over the United States. While a handful are featured as short edited stories on NPR’s Morning Edition on Fridays, every story ever recorded is stored in its full length version at the American Folklife Center at the Library of Congress, and the organization is in the process of making the entire collection of over 45,000 stories digitally available.

“It’s about giving people the chance to connect in the [recording] booth. It’s less about history than wisdom, collecting the wisdom of humanity,” said Isay in a recent phone interview.

According to WYSO general manager Neenah Ellis, when WYSO brought the StoryCorps mobile booth to the Miami Valley in 2010, the agreement stipulated that StoryCorps give 25 of the recorded interviews to the local radio station.

“We got a lot of great, great interviews,” said Ellis.

One of them was villager Jane Scott talking with her mother.

“It was a wonderful way to walk back through memories,” said Scott of the interview. “I decided to do it because my mother was 100 years old and we had been talking about getting recordings of her memories. My mother and I sat across from each other and were able to look at each other and talk together. It’s quite private and intimate. I got many, many, good memories” recorded during the session.

While Yellow Springs resident Fred Bartenstein’s StoryCorps session wasn’t about a personal relationship, it did record an important moment in Dayton’s history. He and the late Dorothy Harback discussed their efforts in the mid-1970s to save the Victoria Theater (then known as the Victory Theater) from demolition.

While WYSO leaders loved the local interviews, the project posed a challenge because the station soon realized it didn’t have enough staff to edit them.

“Sarah Buckingham said, ‘Don’t worry, we’ll get volunteers.’ People brought in their laptops and we gave them the hour-long interviews and asked them to cut them,” Ellis said.

The experience of working with community members to produce radio stories inspired Ellis and the WYSO staff to create Community Voices, which is a six-month long training course in radio production. It includes teaching participants the basics of editing, recording, interviewing and picking a good story, and each session includes feedback from the instructors as well as fellow participants.

“This is our effort to give people digital storytelling tools,” said Ellis of the Community Voices workshops.

This vision is very much in line with StoryCorps, whose mission, as described on their website, is to “provide Americans of all backgrounds and beliefs with the opportunity to record, share, and preserve the stories of our lives…We do this to remind one another of our shared humanity…and weave into the fabric of our culture the understanding that every life matters.”

For Isay, the seed of StoryCorps was planted during the early 1990s when he produced a radio documentary called Ghetto Life 101. The project consisted of giving recording equipment to two African-American teenage boys from the south side of Chicago for a week.

“It was a groundbreaking piece,” says Neenah Ellis. “We play it every year for our Community Voices classes. There was no narrator. He basically gave tape recorders to the kids and said ‘tell me about your life.’”

Isay, who had worked on several documentaries both before and after Ghetto Life, feels that the structure he used in that piece, and that informs the StoryCorps’ approach, “takes documentaries and turns them on their head. While documentaries are about creating a work of art and that’s their public service, I came to believe that the act of telling your story can change people’s lives.”

Similarly, Isay sees StoryCorps as an important tool for people without money or influence to have their voices heard.

“This is very much a social justice project,” said Isay, because every year the organization partners with 500 different non-profits and local organizations to ensure that people who may not hear about StoryCorps through public radio or the newspaper get a chance to tell their stories.

In addition to hosting the mobile StoryCorps booth, WYSO has one another important connection to the organization. Gary Covino, a WYSO alum, collaborated with Isay on Ghetto Life 101.

“There are two stations which are historic in sending people to NPR,” said Isay, and WYSO is one of them. “It’s a fantastic, legendary station.”