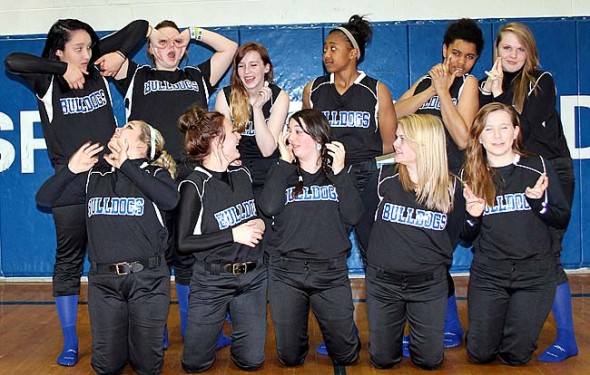 YSHS softball maturing as a team

The turnaround for Yellow Springs High School softball could be likened to a late-inning rally in the bottom of the ninth. After a four-year drought, the Lady Bulldogs took to the Gaunt Park diamonds last year for a 0–10 season with a team of girls who had never before played the sport. This year, the team got its first win. With no graduating seniors, next year’s team could challenge the league’s best.

The team finished 2–8 this year, averaging an impressive 10 runs per game in Metro Buckeye Conference play. By the end of the season three Lady Bulldogs were tied for the top spot in batting average and ace pitcher Sierra Lawrence was second in the MBC in strikeouts.

“Last year we weren’t close to winning — it was a good game if there were quick innings,” said second-baseman Modjeska Chavez. After the team’s first win, against a good Troy Christian side that clobbered the Lady Bulldogs 28–0 the previous year, the team’s confidence grew, Chavez said.

“We started actually playing to win, not just playing to play,” she said. “We had such a big leap from last year and we hope we can take the same leap next year.”

It was a miracle that YSHS even fielded a softball team last year. At a team dinner the night before the 2012 season opener, DeLong told the seven players gathered that they needed to recruit three more teammates by first pitch the next day to play. They did, and the team completed its first season since 2008.

This season, everything changed. With one year of experience under their belts and brand new uniforms and usable gear, the roster of 14 strong won two of its last three games — both by “run rule” after YSHS pulled ahead by 10 runs after the fifth inning. Three players — Chavez, Jesi Worsham, and Sierra Lawrence — all tied for the league lead with a batting average of .571 and Hannah Brown (.500) and Rachele Orme (.462) also made the top ten. Orme also led the league in home runs, with three.

First baseman Chelsea Horton said that this year the girls played more as a team and improved significantly under their coach’s guidance.

“Coach Jim is the best coach anyone could ever get,” Horton said. “He doesn’t yell at us. He encourages us. He makes it fun and also teaches you have to play the game at the same time.”

“Coach Jim” as he is known, is a Greenon native and has coached girls softball since 1992. DeLong’s daugher, Shannon, was an assistant coach.

Another factor in the team’s success was starting pitcher Sierra Lawrence, the only player to train in the offseason, DeLong said. Lawrence was second in the league in strikeouts with 41 strikeouts in 31 innings pitched. She was also second in the MBC for runs batted in, with 12. On April 30, Lawrence pitched the 23–11 victory over Troy Christian, only giving up three hits and getting five strikeouts.

“The key to this game was our pitching,” DeLong said after the victory. “Sierra displayed good control today, and when she has her control, there are not many teams that can hit her.”

Then on May 8, with Lawrence hurt, Worsham, who had never pitched before this season, got her second career start, a 30–20 Lady Bulldog victory over Thurgood Marshall. Worsham was aided by her team’s offensive onslaught. Mar’ria Miley had five RBIs during the game and Orme blasted two home runs. After the victory, Worsham got the game ball and had all her teammates sign it.

DeLong said his team had a lot of natural talent and that he emphasized batting practice. One unique tactic was having his players practice with whiffle balls and miniature t-ball bats to develop better aim. Chavez said DeLong was an expert coach and “he could tell you the slightest way to turn your body when you’re hitting to take [the ball] that extra 10 percent.” But more importantly, the players knew that he believed in them, Chavez said.

DeLong said that while he applied for the YSHS coaching position “on a lark,” the experience has exceeded expectations.

“I came in thinking, I’d do it for one year,” DeLong said. “Once I had been in Yellow Springs I embraced the school, the community, the parents, the kids.”

DeLong said that next year the MBC is wide open and the only team that YSHS didn’t have the talent to beat this year was Dayton Christian. But beating the league rival isn’t his only goal for 2014.

“The girls need to learn how to compete, how to play softball, but it’s not your whole life,” DeLong said. “In the end, if they win by 20 or lose by 20, they keep it all in perspective. They enjoy it and in the end that’s what you want as a coach.”