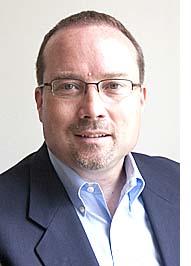 Brian Williams was recently named the new vice president of advancement at Antioch College. He begins next month. Williams, who has a law degree, has been a fundraiser at the Childrens Museum of Indianapolis and Knox College. He hopes to help Antioch reach a yet-to-be-determined fundraising goal of around $75 million over the next few years. (Submitted photo by Dennie Eagleson)

If fundraising is critical to Antioch College’s future, then a lot rests on the shoulders of Brian Williams, its new vice president of advancement.

Williams is tasked with helping the college reach a yet-to-be determined fundraising goal in the range of $75 million over the next few years, money Antioch would use for operations, campus improvements, student scholarships and faculty salaries. That sum is not insignificant for the recently reopened college, which also boasts a $44 million endowment. But after a banner fundraising year, strong admissions and solid alumni support, Williams is confident he can get the job done.

Williams starts next month. He takes a position held by interim vice president of advancement Reid Crawford, who stepped in when Steve Sturman departed in January for a job closer to home at Valparaiso University.

The 48-year-old Williams, who most recently worked for seven years as the VP of development at the Childrens Museum of Indianapolis, views Antioch’s re-emergence as an exciting challenge. Having spent most of his life and career in higher education, Williams said he jumped at the opportunity to return to the field.

“While there is a lot of risk in what Antioch is trying to do, the potential upside is so dramatic that it would be terrific fun and a privilege,” Williams said this week. “I’m hugely impressed that Antioch is doing what it’s doing. There’s no place that a person who is interested in working in higher education can go and do and be part of a liberal arts college re-emerging.”

A firm believer in the liberal arts model, Williams said Antioch needs to show that a liberal arts education is exactly what is needed in the world today, despite being a brand of education on the decline.

Williams grew up in Crawfordsville, Ind., the home of Wabash College, where his father was a professor and chair of the religion department. Later he got degrees from Knox College in Galesburg, Ill. (American studies), University of Wisconsin (history) and Indiana University (law) and was a senior lecturer in the law schools of both Northwestern University and Cornell.

In 2000, after eschewing practicing and teaching law for fundraising, Williams became the director of planned giving and later vice president of advancement at Knox College. Williams said he helped the struggling private liberal arts college with 800 students at the time navigate a difficult financial period marked by a small endowment and leadership transitions. At the Childrens Museum, where Williams has worked since 2006, he helped raised $8.5 million in annual combined revenue and frequently secured donations in the high seven figures.

Williams enjoys the work of fundraising, which, he said, can be rewarding.

“Done right — and that’s an important qualifier — it can be one of the most gratifying occupations because it’s all about if you’re passionate about the institution,” Williams said. “Really the role of the fundraising is to identify the opportunities that people want to invest in and show them how those investments pay off.”

At Antioch, Williams plans to focus on developing relationships with major donors and foundations and keeping alumni and other likely funders abreast of Antioch’s progress. He wants to “expand the net” of potential donors so the alumni don’t get “tapped out,” as their continuing support is vital to the college’s future, he said. And he plans to key in on the “small cadre of very loyal, very generous supporters,” as 90 percent of an organization’s funds are typically raised from just 10 percent of donors.

“The key strategy will just be very effective communication with alumni and other potential stakeholders about the work that’s going on at Antioch,” Williams said. “Fundraising is a little like dating, there is no shortcut.”

According to Crawford, a Washington D.C.-based consultant who has led Antioch’s fundraising efforts in 2013, the college raises about $2.5 million each year from its annual campaign and the rest from major donors. For its fiscal year ending June 30, the college raised $20 million — its best year yet. The Morgan Family Foundation was one major source, pledging $2.875 million over three years. In the two previous years the college raised $13 million and $9 million, according to tax documents.

Crawford attributes the banner fundraising year to growing confidence among donors that Antioch has strong senior leadership, excellent faculty, an active board and success at recruiting students. The recent purchase of the local public radio station (WYSO 91.3FM) and removal of reverter clauses that would have returned control of the college to Antioch University if it failed to be accredited — a $7 million deal that became official this week — are also causes for optimism among donors, Crawford said. The support of alumni, many of whom banded together to purchase the college from the university for $6 million in 2009, remains a critical source of dollars for Antioch, Crawford added.

“We want to show everyone that not only are we doing well in the present, but we have a future because we have the confidence of our friends and alumni, and they show that by giving their treasures,” Crawford said.

The loyalty of Antioch’s alumni has been “intense and immense,” Crawford said. According to a college announcement of the vice president of advancement vacancy, there are currently 17,000 alumni in the college’s network, with 21 chapters in the U.S. and one in Europe and alumni participation in the annual fund for fiscal year ending in 2012 was 26 percent.

Antioch is currently almost entirely reliant on fundraising, as student fees account for less than five percent of the college’s revenue, and fundraising will be key well into the future, according to President Mark Roosevelt in a presentation in May. The cost to operate the college was $12 million last year, a figure expected to grow to $15 million in two years. Even when Antioch’s students begin paying tuition, that money won’t come close to covering the college’s operating expenses and capital needs, Roosevelt said.

Williams added that fundraising is especially important to Antioch since it has a small endowment compared to its “sister colleges” Oberlin ($661 million), Wooster ($232 million) and Kenyon ($185 million).

“Fundraising at Antioch, certainly in the short term and even in the long term, will be crucially important,” Williams said.

Williams will live in the village with his wife, Catherine Lemmer, a law librarian who will join Williams after the fall semester. Their daughter, Cydney, will be attending New York University in the fall.