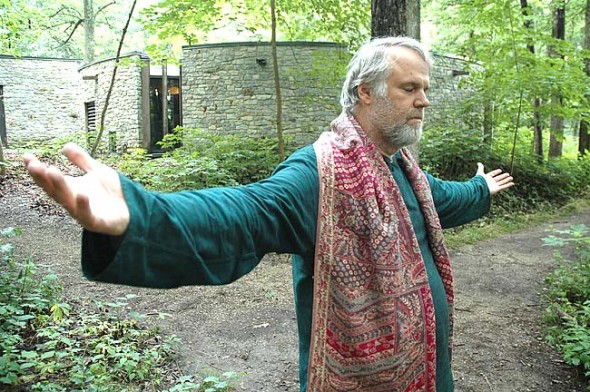 How does one become a healer and mystic? Philip Love’s path has taken him from the communal living of the Rev. Sun Myung Moon’s religious movement to the high life of a Wall Street financial career. The Xenia native ultimately found in meditation and Eastern spirituality the enlightenment he once sought in a Messiah and a materialistic lifestyle and created his own unique practice that blends Tibetan Reiki healing with the Chinese practice of Qigong.

Love recently returned to the area and now teaches from an office in the Union Schoolhouse on Dayton Street what he calls “Reiki Gong,” which can be used for healing and to help people “integrate higher consciousness into their life,” he said.

Love will run a three-day workshop on the practice July 12–14 at the Vernet Ecological Center (formerly the Glen Helen Building). The workshop costs $350 for the public, $250 for Yellow Springs residents and $150 for students and seniors over 60 years old. To register, email Love at reikigongdynamichealth@gmail.com.

As part of the weekend, there will be a public concert at 7:30 p.m. on Saturday, July 13, featuring the Gin-Soaked Angels, Great Guys Music (Jaime Scott, Connor Stratton and Sam Salazar from the band Wheels), Ricki and Philip Bang Drums and Wil C. & Family. Admission is $5 at the door.

According to Love, Reiki is a way of channeling divine energy for healing, while Qigong involves postures and breath work to cultivate one’s personal energy. Both have at their root the concept of “Ki” (in Japanese) or “Qi” (in Chinese) which is the vital life force energy. Adding Reiki techniques to one’s Qigong practice allows for more personal healing, while Qigong helps Reiki healers be purer channels for divine energy, he explained.

The combination of the two ancient healing practices is greater than the sum of their parts, Love said.

“Your own ability to channel Reiki is based upon your ability to manage your qi,” he said. “When you combine the two it creates something more. One plus one doesn’t equal two, it equals 10.”

Workshop participants will learn Qigong meditation, movements and breath practices and how to infuse them with Reiki symbols. According to Love, participants should expect to experience a heightened sense of their own life energy as well as energies they receive from heaven and earth and should be able to better manage these energies for their own health and well-being.

As for the eclectic background that led him to become a healer, Love said he needed to learn to “break down the ego identity.” It was his ego mind that put his religious leader on a pedestal to avoid “doing the inner work” and also led him to lead a life based upon money that was spiritually empty, he said. He ultimately gave up religion for spirituality.

“Religion is for people who want to go to heaven because they’re afraid. Spiritual people have already gone to hell.” Love explained. “Religion is about studying certain paths to learn social mores. Spirituality is discovering the innate divinity in your soul.”

And unlike the guru he once followed, Love does not want to be a leader of a movement. Instead he views himself more as a mystic.

“A mystic is a spiritual teacher who is not involved in building a following of devotees like a guru,” Love said. “People can come and go as they need. I don’t want people to follow me.”

Love grew up in Xenia in the 1960s and ‘70s, frequenting the Yellow Springs hippie scene. As a youth, he acted in an Antioch College production of “Oliver.” After graduating from Xenia High School in 1974 he went to California and left behind a scholarship at Bard College to become a traveling missionary in a religious movement led by the Korean Rev. Moon, whose followers believed Moon was the Second Coming of Christ. There Love had his first spiritual experience.

“I was in heaven, I was in bliss experiencing unitive consciousness. It confirmed the existence of Tao and God in my life,” Love said.

Love eventually became one of Moon’s bodyguards and was one of 2,000 couples married in the church’s famous mass wedding in Madison Square Garden in 1982.

After becoming disillusioned with the church, which Love said became more hierarchical and cult-like, he went to Wall Street because for many years he had lived simply and communally and hadn’t “tried money yet,” he said. He became a successful financial planner for an insurance company and at one time was raking in $400,000 a year, driving a Porsche and carrying a country club membership, he said. With his wife and three children, Love was living the American Dream, which he said was more like an American nightmare.

And it did. After the Sept. 11, 2001 terror attacks, Love’s income dropped by 40 percent. In that shaky period, Love found the book The Power of Now by Eckhart Tolle, which led him back to a spiritual path. He became a student of numerous teachers of mostly Eastern healing modalities, including South Korean Qigong master Khan Bada, Thai Taoist Master Mantak Chia, Tibetan Lama Tenzin Wangyal Rinpoche and American Reiki master William Rand. Love wrote the first draft of an 160-page book in eight hours in 2007 called Conscious Awakening (self-published) detailing his spiritual journey as “hippie, a Moonie and then a yuppie,” he said.

Then came the 2008 financial crash and dissolution of Love’s marriage. He lost everything and returned to Xenia in 2010, broke and homeless with only a bag of clothes in his hand. Love said he went through what is commonly called a “dark night of the soul” before he decided that even though money would be tight, he would begin teaching his original synthesis of Reiki and Qigong and using it to heal others.

Since the beginning of 2013, Love has focused on building his practice, Reiki Gong Evolution Dynamic Health. He set up a studio at the Union Schoolhouse for healing sessions, put on a workshop in Tennessee and produced a DVD series on his techniques shot in the Glen Helen pine forest. Love was invited to go on a 10-city healing tour of India and teach Reiki Gong in Thailand later this year. Lately, he is encouraged with his progress in bringing Reiki Gong to the masses.

“Whenever you’re close to your soul’s path in life, there are little breadcrumbs that are saying this is the way,” Love said.

Though Love plans to put on workshops in Sedona, Ariz. and Mount Shasta, Calif. and around the world, he chose Yellow Springs as his home base because of its openness to new ideas and many people’s commitment to spiritual living here.

“That openness to embrace alternative ways of life is the norm here,” Love said of Yellow Springs. “That energy has been built up over time. If you just go outside the borders, it flips to the other way around.”