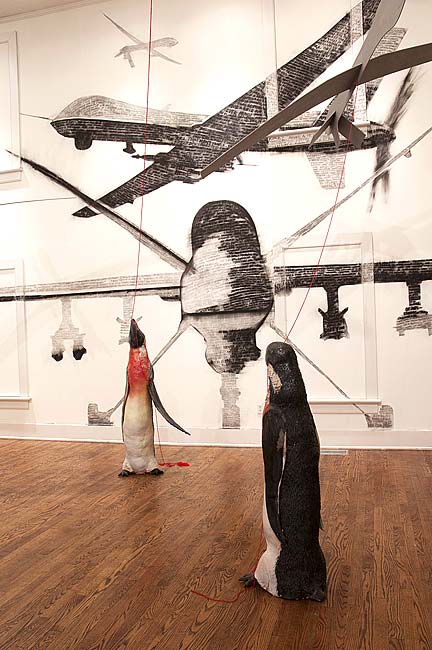 Though it’s been nine years since he returned from the fighting, Iraq war veteran Aaron Hughes deals with the memories of his deployment every single day. So the photos, drawings, writing and installations of tanks, drones and the desert landscape depicted by him and other recent war veterans in the current exhibit, Coming Home, at Antioch College’s Herndon Gallery, are very personal. The show is a collective expression of what it’s like to come back to an ostensibly peaceful society after living daily with the threat and active production of war.

Black and grey drones formed by the words of former drone pilots litter the wall of the gallery’s main installation. One drone reads: “Did we just kill a kid?…Yeah, I guess that was a kid,…Was that a kid?…No. That was a dog,…A dog on two legs?” In the foreground, penguins stand with their young flying what would be kites. But instead, attached to threads of red yarn, they fly drones in the air above. Elsewhere in the gallery, photo transfers of soldiers in desert scenes and Iraqi civilians hang side-by-side, grainy and faint as the memories themselves. A video of American soldiers moving their bodies in expression of the chaos, terror, shock and confusion of their experience overseas plays in the gallery loft. And a collection of books by veterans depict stories like the project former U.S. Marine Ehron Tool started, sending tea cups as peace offerings to United Nations ambassadors such as John Negroponte of the U.S. and Adolfo Aguilar Zinser of Mexico.

According to Hughes, while most Americans don’t sit around every day thinking about the bombs and the killing that happens overseas in their name, many of the soldiers who have been there can’t stop thinking about it. They think about the people they met, those they befriended and those they killed, and the fear they had along the way of losing their own lives. When Hughes came back to his home in Chicago, he knew no other veterans and found it extremely difficult to bridge the gap to friendship with those who had no idea what he had seen during his 15-month deployment in Iraq.

“Few people understand the complexity and the trauma of war — a system designed to kill other human beings,” Hughes said. “And being part of it is traumatic — like being in a black hole where you experience something but you never process it. What you end up with is this absence of meaning.”

But for Hughes, the opportunity to communicate his feelings about his service to both citizens and other veterans has been cathartic. He described it as going back into the hole to “create meaning and language to counter the trauma.”

One experience in particiular, which Hughes included in a story-telling performance at a gallery talk here in June, was about his first weeks of deployment when he was approached by an unknown Kuwaitee Humvee while standing guard at a checkpoint. Having been trained not to trust any non-Americans, Hughes was scared and he called his sergeant at guard to warn him. When the Kuwaitee arrived, Hughes learned he had come to offer the young soldier some tea. But Hughes refused the tea, as he did many times after, until, living back in the U.S., he was making a presentation as a representative of Iraq Veterans Against the War at the first international conference of Iraqi oil workers. Hughes spoke about his need to take responsibility for his role in the war and became emotional when an Iraqi citizen came on stage to embrace him for his courage. Afterward, the Iraqi offered him some tea, and for the first time, Hughes accepted. He has since travelled as far as Beirut and Japan to perform tea ceremonies and dialogue about war.

While Antioch College has traditionally opposed war and violence, Coming Home is not intended to be a political statement, according to Herndon Gallery curator Dennie Eagleson, who co-curated the current exhibit with Antioch alumna Lynn Estomin. The show is intended to provide a space for veterans to express what war does to those who carry it out. And at a time when the Springfield Air National Guard and Wright Patterson Air Force Base are supporting the increased use of unmanned aerial vehicles (drones), the work also shows how different kinds of warfare affect the human mind. Eagleson hopes the exhibit helps to engage Antioch students, some of whose family members have served in the military, on the subject of war and warfare.

“We want the students to appreciate what these people are doing to keep us safe, and the burden they bear, and to give a voice to people who have been there” in the fighting zones, Eagleson said.

To that end, next weekend the gallery will host a series of free writing workshops to give new voice to local veterans and connect them to the community. The workshops will be led by Lovella Calica, founder of Warrior Writers, an organization based in New York City that helps veterans find healing through artistic expression. The program begins Friday, July 26, 10 a.m. to noon, with a talk about using writing as a tool for healing. The session continues Saturday, July 27, 10 a.m. to noon, with writing exercises and sharing stories. The workshop will conclude with a reading by workshop participants on Saturday evening at 7:30 p.m. in the Herndon Gallery. The community is invited to attend.

Calica has worked with veterans for several years and has been enthralled by the stories and the writing she’s seen, and she wanted others to see the depth and beauty of the work as well, she said in an interview this week.

“A lot of vets haven’t had the opportunity to share honestly and openly about their experiences,” Calica said. “But often when they do, they feel relieved, and they have a sense of connection with others about a shared experience so that they don’t feel so alone and isolated.”

Since traveling and discussing his experiences in war, Hughes has met many other vets who understand exactly what he means. The act of expressing, especially to other veterans, has helped him to cope with his stress.

“To be able to create meaning that’s shared through performance and writing and hearing other veterans expressing similar thoughts and experiences — it’s transformative.”