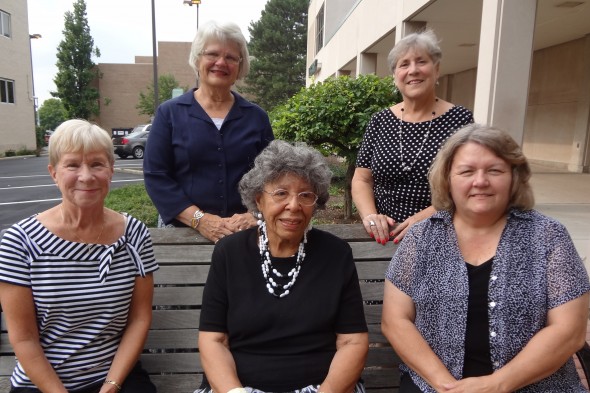 Villager Phyllis Jackson, center, is one of five women to be named to this year's Greene County Women's Hall of Fame.

The names of five Greene County women who will be the 2013 inductees into the Greene County Women’s Hall of Fame have been announced. The honorees are Genell Benner, Elaine Hughes, Barbara Mills,  Cheryl Shedden and Yellow Springs’ own Phyllis Lawson Jackson. This marks the 33rd year for these recognitions.

Jackson will be inducted into the Hall of Fame for her endeavors as a community volunteer.  For over 30  years she has been an active volunteer with the Yellow Springs Senior Center, promoting physical and mental fitness activities and serving as a driver and hostess. She was the 2013 recipient of the Greene County Council on Aging Senior Center Leadership Award. A founding member of the Yellow Springs Historical Society, she has served on the board and spent many years honoring village elders by compiling their stories.  Some of her historical research became part of a CNN feature. Phyllis worked to ensure a diverse representation of women at the Women’s Park of Yellow Springs, dedicated in 1998.  She is co-editor of the book, Celebrating Women: The Women’s Park of Yellow Springs. Phyllis served as an early member and catalyst of the African–American Genealogical Group of Miami Valley and has shared materials from her various genealogical research with this network.  Upon the opening of the National Afro-American Museum and Cultural Center in 1988, she became a museum docent. Throughout her life Phyllis has been an active member of the Central Chapel African Methodist Episcopal Church, and is an active member of the Friends of Payne, an organization in support of Payne Theological Seminary in Wilberforce.

The public is invited to attend the Recognition Day Luncheon honoring these women to be held at Walnut Grove Country Club at 11:30 a.m. on Saturday, September 28, 2013.   For further information or telephone reservations, call Ann Byrd, Hall of Fame co-chair at 429-1805.