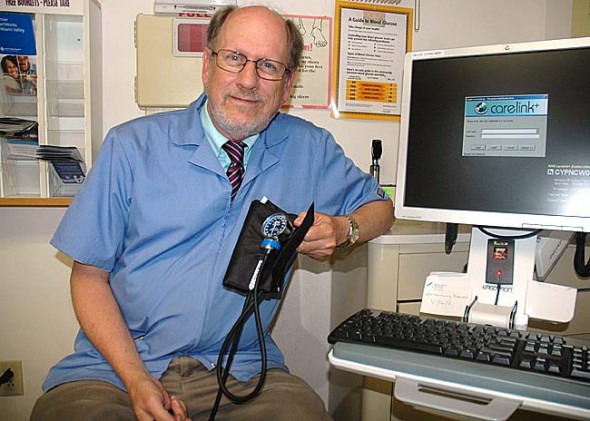 Dr. Paul Van Ausdal will retire after 34 years at Community Physicians on Friday, Sept. 27. The office will honor him with an open house for the community from 2 to 5 p.m. on that day. (Photo by Diane Chiddister)

When people ask Dr. Paul Van Ausdal if he’s retiring from medicine due to the impending changes of Obamacare (and he gets this question a lot), he says, absolutely not. Rather, he believes health care reform can only improve a broken system.

“Patients die for lack of health insurance,” he said in a recent interview. “My patients have died for lack of insurance. They have died from not getting preventative services, not being treated for treatable conditions like hypertension or diabetes.”

Van Ausdal is retiring after 34 years at Community Physicians, now a part of the Kettering Health Network. He will be feted at an open house at his office on Friday, Sept. 27, from 2 to 5 p.m. The public is invited.

It seems to Van Ausdal a long time ago that he first came to Yellow Springs as a young physician with a growing family, after practicing in a small town in Minnesota. He and his then-wife, Caroline, had adopted three Korean children, and with the birth of their daughter, Corrie, they now had four. Originally from Beavercreek, Van Ausdal was aware of the village’s reputation for diversity.

“We wanted a racially diverse school system,” he said, and he and his wife, both musicians, were also attracted to the robust school music program started by Mary Schumacher and Shirley Mullins.

Van Ausdal was boyish looking for a man in his 30s, and people sometimes had a hard time believing he was old enough to be a doctor.

“I felt like Dougie Houser,” he said of the TV character. “But people stopped saying that after a while. Now I’m the kindly old bald doctor. It just happens.”

A great deal has happened in the past 34 years to change the medical system, and much of it is not good, according to Van Ausdal. For one thing, he is now one of only two primary care physicians in the village, where once there were more.

But primary care has been “cut off at the knees” by the managed health care system that began using private sector strategies to cut costs.

“It squeezed discounts out of every aspect of the system,” he said of managed care, making it more and more difficult for an independent, primary care office like Community Physicians to survive.

Once an office of three physicians, Community Physicians was not able to attract a third partner when Dr. Carl Hyde retired, so Van Ausdal and Dr. David Hyde soldiered on. But costs kept rising and reimbursements kept declining, so that finally the office chose to become a part of the Kettering Health Network, which was the only way it could continue to operate, Van Ausdal said. And the Kettering network is the reason that Community Physicians has found a replacement for Van Ausdal, Dr. Neha Patel.

“There’s no way David and I could have recruited a new doctor without Kettering,” Van Ausdal said.

Joining the Kettering network came with its own changes, however, including the mandate that the doctor rather than a nurse or administrative assistant record all medical records electronically, in line with international standards. While previously Van Ausdal spoke his notes into a recorder or wrote them out to his nurses, he now must laboriously put everything into the computer following rigid guidelines.

“It reduces our ability to see patients efficiently,” he said. “It bogs everything down.”

And insurance companies, mandating that hospitals must discharge patients more quickly than in previous years, have sparked the move toward “hospitalists,” doctors who practice only in hospitals. While Van Ausdal once followed all his patients into the hospital and made daily rounds, he now has little or no contact with them once they’re hospitalized.

“You don’t know as well as you once did what’s happening,” he said.

While he finds many of these changes disturbing, Van Ausdal is gratified that after seeing the status of primary care decline for many years, it appears to be making a comeback.

“A lot of the science has changed, but the strategies and philosophies are the same,” he said.

While changes in the medical profession have often been difficult, Van Ausdal said he is glad he chose to practice in Yellow Springs. He will miss the constant variety of his days, and the endless challenges each patient presented.

And practicing in such a lively, intellectual town offered its own rewards.

Villagers’ interest in alternative health also broadened his own awareness, according to Van Ausdal. For instance, he keeps in his office a large reference book on herbal remedies that he pulls out when patients express an interest.

“Whatever people run by me, I can give them some information on it,” he said. However, he is also skeptical of those who tout herbal treatments as preferable because they’re more

“I would counsel awareness,” he said. “Some herbs have toxic potential.”

Looking back, he has surprised himself, as an introvert, to have spent more than three decades in a profession that requires intense social interaction.

“I didn’t want to do scientific research, I wanted to deal with the public,” he said. But he’s still a bit amazed that he’s been “putting myself before people for almost 40 years, and it’s been gratifying.”

Van Ausdal is looking forward, in his newfound free time, to more time for music. He will continue to play for the Springfield Symphony, where he is principal violist, and hopes to be a mentor to music students in village schools under new music teacher Brian Mayer.

He also looks forward to more travel with his wife, Dr. Carol Van Ausdal, a pediatrician in Dayton who is also retiring, and to spending more time with his children and grandchildren.

He looks back on his career with fondness, Van Ausdal said.

“I’m grateful to the community,” he said. “I enjoyed working with my patients for 34 years.”