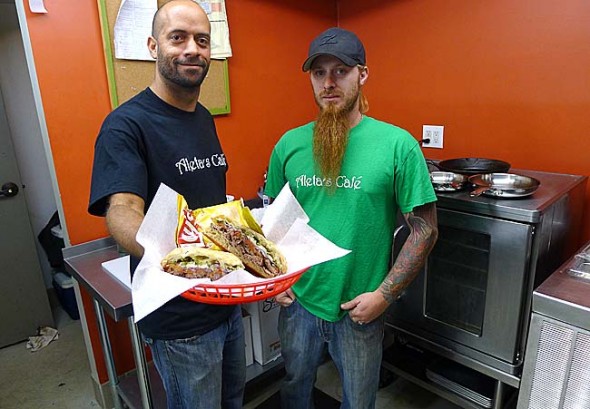 Matthew Willis and Gregg Pastorelle will open Aleta’s Cafe in the Oten Gallery on Xenia Avenue next spring, with occassional hours until then. Willis and Pastorelle, who have worked in local restaurants and played together in local heavy-metal bands, hope the panini sandwiches, Naan bread pizzas and salads in their music-themed restaurant appeal to a local crowd. (Photo by Megan Bachman)

New café opens at the Oten

Good, simple food is the promise of a new restaurant opening here next year.
Aleta’s Café, in the Oten Gallery, 303 Xenia Ave., will serve hot panini sandwiches, pizzas made with naan bread and elaborate salads for lunch and dinner.

The restaurant is projected to open with regular hours next spring, but until then can serve customers during limited hours under a temporary license from the Greene County Health Department, according to owners Matthew Willis and Gregg Pastorelle.

Willis and Pastorelle, who have both worked in local restaurants, said they hope Aleta’s Café appeals to a local clientele and doesn’t duplicate other local offerings.

“We wanted to provide a new place with food that is simple and good and different from what others are doing,” Willis said.

A signature entrée is a steak panini with seasoned flank steak, roasted tomato and onion, fresh mozzarella and mint pesto on focaccia, Pastorellle said. Aleta’s has been open for the last two weekends and received positive feedback on the food, he added.

Willis and Pastorelle met 12 years ago as members of the local heavy metal band Achilles Heel. Their love of music is infused through the restaurant’s décor, with scattered rock memorabilia and posters of Kurt Cobain, Jimi Hendrix and Bob Marley overlooking tables.

After the Yellow Springs Arts Council vacated the Oten Gallery, Willis and Pastorelle seized the opportunity to open a restaurant, a long-held goal for both, in such a beautiful space.

“This is the coolest building in town,” Pastorelle said. “It’s the most interesting architecturally and we have the patio and garden to put seating outside.”

Added Willis: “We’re trying to provide a nice place for the community to come and relax in a cool setting.”

Together, Pastorelle and Willis bring nearly 30 years of restaurant experience to Aleta’s. Pastorelle, a graduate of Columbus Culinary Institute, has cooked for 18 years, including at fine dining establishments and most recently at Sunrise Café. A native of Cleveland, he now lives near South Charleston. Willis has 10 years of restaurant experience, including at Peach’s Grill and Friends Care Community. Willis, born in Cedarville, recently moved from Yellow Springs to Enon.

The name of the café honors Willis’ triplet sister, Melanie Aleta Willis, who died in 2009 from Graves’ disease. Melanie showed Willis how to cook so he could find a job, Willis explained.

“She loved food and loved cooking,” Willis said. “She is the one that got me into cooking. Before that, if cooked cabbage was on the menu, I would put lettuce in the oven,” he joked.

Willis and Pastorelle opened the restaurant with personal savings. Both have families and young children and hope the restaurant is a good investment financially as well as a chance for self-employment.

“Through support and staying with it in the long-term, I want to create a good lifestyle and to give back to the community,” Willis said.

Asian Collection closes
While one business opens at Oten Gallery, another shutters. Asian Collection will close up shop in January after 13 years of selling clothing, jewelry, traditional handicrafts and cultural items from Asia.

“It’s the end of an era,” owner Chris Shaffer said this week.

Shaffer recently moved to Portland, Ore. with his two young daughters but will keep the store open through the holiday season. Originally from the West Coast, Shaffer returned there to spend more time outdoors and hiking, he said, while he has enjoyed living and working in Yellow Springs.

“I definitely have mixed emotions,” Shaffer said of the transition.

After a fire ravaged the building in 2000, Asian Collection was the first shop to move in to the rebuilt Oten Gallery, according to Shaffer. While the first few years were profitable, there weren’t enough customers in recent years, so Shaffer began staffing the store himself and selling his wares online.

“I would have had to close five-to-seven years ago — I was desperate,” Shaffer said. “It’s just not busy enough as a storefront.”

Asian Collection will remain open through the end of the year with deep discounts on its merchandise. Some products will continue to be available online at http://www.asiancollection.org.

Epic rebooted as used bookstore
Four years after closing her Epic Book Shop on Dayton Street, Gail Lichtenfels will reopen as a used bookstore in the space vacated in August by the Main Squeeze juice bar. Lichtenfels had owned the bookstore since 1974.
The thrust of the new Epic at 229 Xenia Ave. will be buying and selling used, rather than new, books. The store will open in mid-November, Lichtenfels said.
An extended article on the new used bookstore will be in an upcoming News.