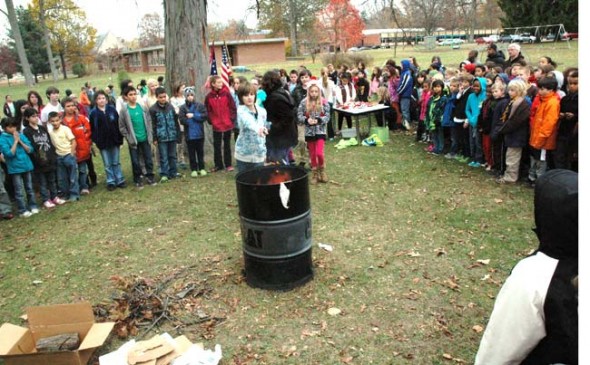 Many Mills Lawn School students, teachers and veterans participated this Veterans Day in a flag retirement ceremony, wherein a flag too damaged to fly as a fitting emblem is burned. (Photos and video by Matt Minde)

Like many other grade school kids around the country, Mills Lawn students celebrated Veterans Day by hosting lunch for the many aunts, uncles, mothers, fathers and friends who had served or are serving in the military. The assembly, organized by several scout troops and the fifth grade, included presentations of patriotic song and brief informative lectures on what it means to serve one’s country in the military.

But this year, many students also participated in a flag retirement ceremony, wherein an American flag “in such condition that it is no longer a fitting emblem of display, should be destroyed in a dignified way, preferably by burning.” (United States Flag Code). The flag may either be folded according to prescribed methods, or, if it is significantly deteriorated, the stripes may be cut apart and separated from the field of stars.

The Yellow Springs Girl Scout Troop No. 30349 color guard led a procession of scouts from the lunch room out towards the tennis courts, where students, teachers and veterans waited in silence around a steel drum containing a fire. At one side was a table with the remains of several flags. Students and guests were asked to take a flag remnant, walk to the fire, kiss the relic and toss it silently into the flames.

The spectacle continued for the better part of an hour, with youth and veteran quietly doing their part in the ritual, then turning to the sidelines to watch the others.