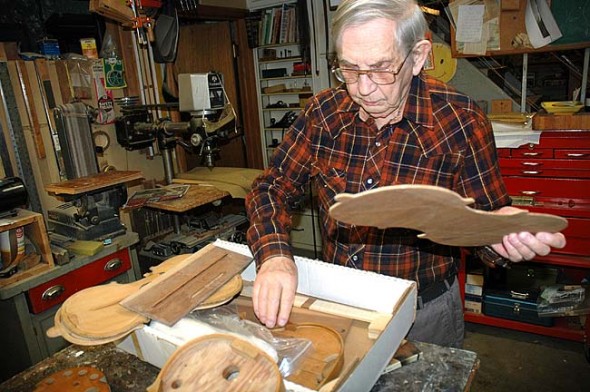 Ray Lewkowicz has been the go-to repairman for string players in and around the village. As a mathemetician and a musician himself, he opened his business, The Violin Doctor, out of a desire to learn the science and art of instrument making. (Photo by lauren Heaton)

A doctor of strings and theory

As a professor of mathematics and the son of a consummate craftsman, local resident Ray Lewkowicz had the temperament, breeding and just the right amount of curiosity to become an instrument maker. He opened his home business on Shawnee Drive in 1975 and has been climbing up and down his basement steps between the front door and his workshop ever since, repairing the bows, bridges and boxes of the stringed instruments of many residents and students of the village.

With a solid craftsman background, Lewkowicz doesn’t suffer lore about the sound of a musical instrument gladly. Instruments don’t get their sound from the illustrious places they’ve been or even the famous people who have played them. Rather, their interdependent parts function together to produce a sound that is directly proportionate to the precision with which they have been crafted. There is no mystique to behold: the sound of an instrument is about rules and practice of craft, both of which anyone can learn and apply, he implied in a recent interview.

Yet having long ago earned a Ph.D. in math, Lewkowicz has some familiarity with theoretical inconsistencies and phenomena that cannot be explained. The inexplicably penetrating or haunting sound of some older wooden instruments is one of them. And though he tells himself that older instruments sound different because their parts have flexed and loosened over time, he acknowledges that numerical theory has still not been able to explain the effect to his satisfaction.

“I admit, there is not much of a comprehensive scientific theory behind it all,” he said. “It’s mostly physics — you can make the pieces in the same manner, but when you put the instrument together, everything changes.”

Lewkowicz, who, like his father, grew up playing the violin, became interested in trying to make one after his father died in 1948 and left behind his old violin. He wanted to restore the instrument and began asking around for help. Through the Catgut Acoustical Society of which he was a member, Lewkowicz learned of a science teacher, violin maker and researcher named Carleen Hutchins.

Stringed instruments are made with a front and back wooden plate, each tuned or tapered to a specific grade and pattern to produce the resonant sound of the strings. Tapering has long been the exclusive domain of masters who spend years learning to grade by the sound of their tapping on the plates, Lewkowicz explained. That is, until Hutchins came along. Using a speaker system and a radio frequency generator, Hutchins observed that at certain frequencies, when an aluminum particulate matter is sprinkled over the surface of a well tapered plate, the particles form distinct patterns across the surface of the plate. Her technique, though criticized by detractors, throttled plate tuning and therefore instrument making into the realm of the relative novice, including Lewkowicz himself.

“Carleen’s process eliminated the need for anyone to have a teacher of tap tones,” he explained. “With no experience in violin making, I got information about how to make a violin sound good.”

Of course Lewkowicz had been working with wood all of his life. Growing up adjacent to Central Park in central Manhattan in the 1930s, Lewkowicz built model airplanes and sailboats in his father’s basement workshop and tested them out in the park. After college he was drafted into the Army, where he served as an airplane mechanic in Yokohama. And after graduate school, he got a job teaching math at Wright State University. But he continued to make things with his hands.

He made the harpsichord that sits in the living room of the home he shares with his wife Nancy, a cellist and scholar of Arabic and linguistics. And once he understood the principles of violin making, he made one for himself. Then he made a cello for his daughter, Anne, and another for his wife, with whom he plays in a string quartet each week. He made a guitar, too, before his curiosity was satisfied and he settled into mostly repairs.

His hands stayed busy as he took on the care of the Yellow Springs High School orchestra’s instrument inventory in the 1990s, working with then program director Shirley Mullins. And up until a few years ago he also cared for the stringed set from several schools in Springfield.

Though the work from the schools has tapered off recently, Lewkowicz is never short on reasons to steal away to his basement. One corner has been reserved entirely for oil painting projects he has been working on and sharing with the Dayton Society of Sculptors and Painters. His portraits and landscapes share a care and precision with his woodwork, and Lewkowicz says, as with his handmade instruments, he wouldn’t sell his art.

While Lewkowicz was growing up, his father worked as a wool mill weaver, a picture framer and a watchmaker in Boston and New York. He learned a lot from watching him, and then took it a step further when he got into instrument making.

Though the arguments about whether wood from the “southern side of the mountain” is better or the effect of particular varnishes “go on and on,” Lewkowicz feels that Hutchins’ work is incomplete. There is a science to instrument making, but no one has figured it all out yet. And while he once considered applying his mathematical surface theory to such a study, he has since given up on it. At 83 Lewkowicz is content to enjoy the world through his handiwork and let the next wave of precision artists tackle the big questions.