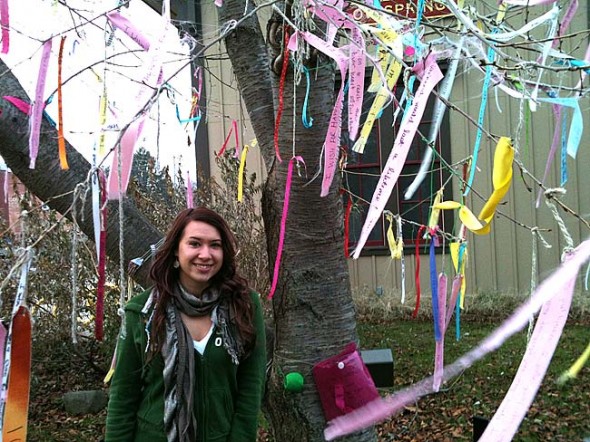 In the past several months, many villagers have taken advantage of the Wishing Tree, next to the Village train station. Created by new resident Alicia Chereton, the tree is designed to hold the hopes and dreams of community residents. (Photo by Anisa Kline)

A tree for wishes, community

Beginning in late August, villagers may have noticed that a tree next to the train station was growing ribbons along with its leaves. Upon closer inspection, the ribbons reveal themselves to be wishes, written by both tourists and townspeople and tied to what has now become the Wishing Tree.

Judging by the number of ribbons on the tree, the project has been well received and much appreciated. The wishes range from the personal to the global and from the mundane to the profound, with many leaving the reader wondering about the author.

“I wish that I will never be afraid to show my religion,” reads one, while another says, “I wish for a beard [sic] man to marry.” Others wish for “equality among all people everywhere,” “everyone to reach their goals and follow their heart” and “living in Japan and finding a Japanese girl to marry.”

The tree, started by recent Michigan transplant Alicia Chereton, was created as a response to the aftershock of the July 31 shootout and death of Paul Schenck, which she perceived as affecting the whole town.

“After Paul, everyone was down,” she said. “I felt like it wasn’t the same feeling in town as when I first arrived. I wanted to do something that would bring people together and let people know they’re not alone — everyone needs something.”

Chereton also wanted to do something that would be relatively inexpensive and available to villagers and tourists alike. She had previously noticed that the tree functioned as a kind of peaceful refuge in the busy downtown area and that many people who worked downtown used the place to eat lunch or relax during their breaks. Already having some hemp and ribbons at her house, the wishing tree seemed like a good way to accomplish her goal.

“I was trying to think of something that everyone could do,” she said. “This is a tourist town and I wanted something so that people from out of town could see what we’re about and bring some of that back with them.”

For Chereton, along with her friends and Wishing Tree collaborators Paula Smith and Lukas Dobbins, the tree is a way to give back to a community that has embraced them in recent months. Both Smith and Chereton hail from outside Detroit and were inspired to move here by Smith’s son, who is stationed at Wright Patt.

“Ricky [Smith’s son] came to the Glen one day,” said Smith. “And he called me that night and said ‘Mom, I found the place I want to live. I found the place we’re going to live.’” Within months, Smith had relocated to Yellow Springs and Chereton, after visiting them, also decided to move.

“It’s been a crazy four months,” said Chereton of her time in Yellow Springs so far. “I’ve changed and grown so much.”

“I grew up in Centerburg, which is also a small town,” he said, “but it is conservative and close-minded and I was the only openly gay kid in town,” which was challenging. He learned about Yellow Springs through a conversation he had with a customer while he was working at Starbucks and trying to decide where to move after graduating from high school. The man, whose name he never learned, asked “Have you heard about Yellow Springs?”

“Since I’ve come here, I’ve really found myself,” said Dobbins, noting how accepting the town is. “I don’t have to worry about people shouting stuff from trucks when I walk down the street.”

“This is our thank you for welcoming us,” said Smith about the Wishing Tree.

“I love coming back every day and seeing the ribbons just multiply,” said Dobbins. “One of my favorite parts is watching people sitting here thinking of the wish they want to make. They always get a little smile on their face when they think of it.”

For villager Erin George, who was 42 weeks pregnant at the time she made her wish, the tree was a place to express herself on the day she was scheduled to be induced.

“The wishing tree provided a perfect venue for me to channel my feelings and properly begin the journey to meeting my son,” she shared in an email. “I’m beyond grateful for such a magical place and I’m even more grateful that my wish came true.”

George continued, “I still smile fondly every time I pass by that sacred spot, hoping all others who find it experience the catharsis and joy I was lucky enough to find on a special September day.”

While George’s response is exactly what Chereton was hoping to create with the tree, its popularity has made it difficult to keep up the supply of ribbons and hemp.

“The first four spools were gone in the first four days,” said Chereton. “I come here and my heart breaks when there’s no ribbon, but it’s getting expensive for me to supply.” Because of this, she is hoping others will support the project by contributing materials. Anyone interested in donating ribbon, of any length or color, should drop it off at Bentino’s, where Chereton works.

“I just want people to come and enjoy it,” she said. “When you read the wishes, your heart goes out to them. It’s important to let people know they’re not alone.”