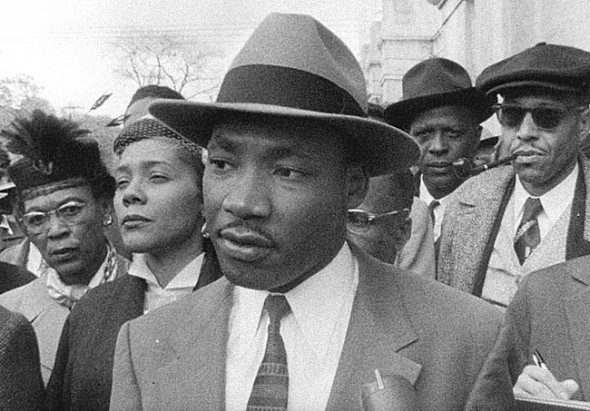 A special screening of the rarely-seen 1970 documentary film, “King: A Filmed Record: Montgomery to Memphis” will be at 1 p.m. on Sunday, Jan. 19, at the Little Art Theatre as part of two days of activities commemorating Martin Luther King Jr. Day. The film’s producer and director, Richard Kaplan, an Antioch alumnus, will lead a discussion following the screening. (Submitted photo courtesy of Kino Lorber)

If you missed the special one-night screening on March 20, 1970, of the epic film “King: A Filmed Record … From Montgomery to Memphis,” in one of the 600 theaters across the country that showed it, then you probably haven’t seen it since.

The film that was nominated for the 1970 Academy Award for best documentary feature, floored audiences and impressed critics has not been in wide circulation and has scarcely been seen in 40 years. 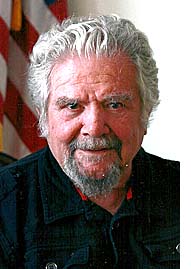 Antioch alumnus Richard Kaplan, class of ‘49, will be in town to present his 1970 documentary “King: A Filmed Record … Montgomery to Memphis” and speak at a panel at Antioch College. (Submitted photo)

But as part of events commemorating Dr. Martin Luther King Jr.’s birthday, the three-hour tribute to the life and work of King will be shown locally, presented by the filmmaker, Richard Kaplan, a 1949 Antioch College graduate.

“It’s something people need to see,” Kaplan said this week of his film, which documents King’s life from the 1955 Montgomery Bus Boycott to his assassination in 1968 using archival news footage without narration. The power of the film is in the aggregation of some of the most dramatic moments in the civil rights movement and has had a major impact on those who saw it, Kaplan added.

“We’ve all seen individual scenes, but to see the totality of the goings on in this country as far as black people are concerned, it’s mindboggling,” Kaplan said. “It knocked the socks off of people — that was the impact and still is. I show it to kids today and they can’t believe it and that’s the importance of the film.”

“King: A Filmed Record” will be shown at 1 p.m. on Sunday, Jan. 19, at the Little Art Theatre and at 6:30 p.m. on Monday, Jan. 20, in Room 113 of McGregor Hall on the Antioch campus. Both screenings are free and open to the public. Kaplan, who produced and directed the film, will lead a discussion following the showing at the Little Art.

Kaplan has been working over the last few years to bring the film to new audiences after copyright issues kept it in obscurity. Working with a new distributor, the film is available in DVD and Blu Ray and is now being widely used for educational purposes. The struggle of African Americans continues today, Kaplan said, which is why it is so critical to get the film out.

“The message of the film is as important from my standpoint today as it was then, unfortunately,” Kaplan said. “All you have to do is to pick up any newspaper— race is an issue that has not been taken care of in this country.”

As an Antioch College student in the 1940s, Kaplan worked in the college tearoom, befriending another student worker, Coretta Scott, who would one day marry King. As a student Kaplan also participated in early civil rights actions and was part of a group of black and white students that successfully desegregated the Little Art Theatre when they sat in a “White’s Only” section until the owner closed up shop, opening it a few days later without separate sections. Kaplan said that Antioch was a major influence in his life and that he took Horace Mann’s injunction to do something for humanity seriously.

Kaplan went on to become a celebrated filmmaker whose film, The Eleanor Roosevelt Story, won the Academy Award for best documentary feature in 1965. He won an Emmy Award for “outstanding historical and cultural programming” for his film The Exiles.

When producer Eli Landau approached Kaplan soon after King’s death about making a 10-minute documentary on his life, Kaplan soon realized that it wouldn’t do him justice and scoped out a film that would rely heavily on the eloquent words of King and news images of his struggle. It took a staff of 40 people collecting archival footage two years to complete the effort, starting with rare footage of a “young, 26-year-old preacher” during the Montgomery Bus boycott, Kaplan said. Kaplan’s final product was an “incredible success financially and artistically” with rave reviews from media, he said.

The New York Times called it “Stunning…the events are allowed to speak for themselves,” the Philadelphia Bulletin said it is “Perhaps the most important film documentary ever made” and the Los Angeles Times said it is a “A piece of history of immense power.”

“It’s [King’s] whole career and for young people, and even old people, they don’t often get the long view,” Miller said. “They know the March on Washington and Bloody Sunday, so this ought to fill in a lot of gaps.”

Antioch will host “Voices of Change: Songs and Poems of Freedom and Social Justice” at 7:30 p.m. on Sunday, Jan. 19 at the Coretta Scott King Center, Livermore Street near West Center College. The event is an open mic for community members and college students to share their thoughts on liberation movements and ideas. People are invited to “speak from the heart on the idea of liberation of the human soul and the values that King talked about,” according to Louise Smith of Antioch, who is organizing the event. MLK Day continues to be an important time for people to consider King’s legacy and his enduring words, Smith said. It’s also an important day for her.

“The day is important for me having grown up with King as an ethical, moral spiritual model of how to be a human being and how to treat others,” Smith said.

On Monday, Jan. 20, an opening program for MLK Day will be at 9:30 a.m. in 113 McGregor Hall on the Antioch College campus featuring musical selections by tenor Christopher Smith, readings by Antioch students and a keynote address by the Rev. Joel King Jr., a cousin of Martin Luther King Jr.

According to Kevin McGruder, an Antioch college assistant history professor and a member of the Central Chapel AME Church and the World House Choir, MLK Day continues to be a time for black and white community members to come together to celebrate King’s legacy and focus on local inequality.

The civil rights movement was multi-racial and its goals could not have been achieved without participation of white allies, McGruder added. Today’s problems such as the achievement gap between white and black students in local schools, are less evident but still require that cooperation.

“The problems are not staring us in the face but in Yellow Springs many people are still devoted to social change and activism,” McGruder said. “Yellow Springs is uniquely positioned to be a voice, particularly in issues of race.”

At a panel discussion at Antioch in the afternoon participants will discuss issues of inequality and discrimination in the village and on campus. The theme of the panel is “Where Do We Go From Here: Chaos or Community?” which is the title of the final book by King and a speech he gave in 1967.

According to Smith, the college is looking at its “internal infrastructure” in addressing issues for students of color, focusing on how the Horace Mann Fellowship can continue to offer those students unique access to a liberal arts education. Antioch is also partnering locally with the 365 Project to help address the achievement gap in Yellow Springs Schools and other area high schools.

MLK Day is not a “day to take off” but to do something meaningful, according to Miller, and he hopes that villagers participate in MLK day events to continue Yellow Springs’ civil rights legacy.

“For me it’s a holiday different from all the others,” Miller said. “I’ve never seen it as a day to take a day off, I’ve seen it as a holiday to do something meaningful. We have a history of it here and so here is a good place to continue.”