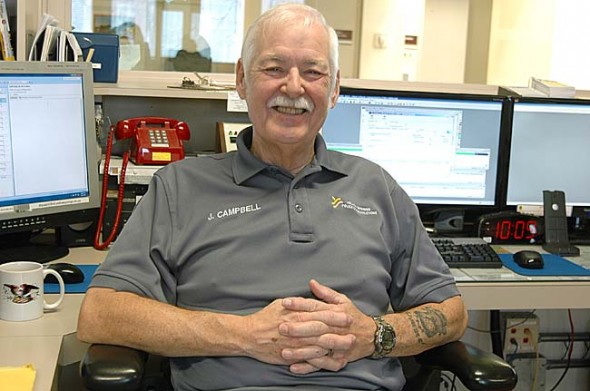 Larry Campbell recently retired after almost 45 years as an employee of the Village of Yellow Springs, where he worked first as a police officer, then a member of the public works crew and most recently as a dispatcher. (Photo by Lauren Heaton)

After nearly 45 years of service to the village — first as a police officer, then as part of the public works department and finally as an emergency dispatcher — Larry Campbell has retired. His last day was Dec. 31.

His first day, in March 1969, remains just about as fresh in his mind.
“A guy pulled a knife on me,” Campbell recalled last week over coffee at Peach’s Grill. “Henry Austin … right in front of Morgan House … he had an old hickory butcher knife.”

The suspect was wanted for “cutting up a college student with a broken beer bottle,” Campbell said. The rookie officer wasn’t without backup, however. Former Yellow Springs officers Richard Turner and Hugh Livingston were also on the scene, as was former Chief James McKee, who took the suspect by surprise by coming up and grabbing him from behind.

“He almost got shot,” Campbell said of the suspect. The chief, too, he added, because of his location. But no shots were fired, and the altercation ended without additional injuries. It was a typical resolution of a tense situation under McKee, Campbell said.

“I didn’t always agree with him, but Jim McKee had a good philosophy about law enforcement as service to the community,” Campbell said. “There’s a difference between law enforcement, and enforcing the law. McKee thought if you could pick up a drunk and take him home, it was better than making an arrest. With a lot of officers, they define their worth by the number of arrests they make. That makes me sad.”

Campbell, who grew up across the Clark County line and attended Greenon district schools while both parents worked at Antioch College, came to work in Yellow Springs after serving in the U.S. Marine Corps from 1964–1968, tenure that included active duty combat in Vietnam from 1965–1966. A tattoo on his left arm and decals on his blue pickup truck commemorate his service. He spent his first seven months after the military employed at Morris Bean, before McKee hired him into the police department.

He quickly found he had a lot to learn.

“I had never had to deal with the general public like that,” he said. “In the military, there’s a clear black and white” about what to do; but with police work, “there’s a lot of gray area.”

A highlight of his years on the beat wasn’t gray. “I solved a robbery at Erbaugh and Johnson’s,” he said. The pharmacy clerk reported that the thief had fled in a Volkswagen with out-of-state license plates. The car sounded familiar to Campbell. “Didn’t we put a ticket on that VW last week?,” he asked a colleague. He found the ticket report, looked up the registration information for the plates, and sent out an alert to neighboring jurisdictions. The car was found, an arrest was made, and the pharmacy clerk identified the suspect as the robber.

In January 1984, he put his uniform away and joined the Village’s public works department, where he worked as part of the electric crew before returning to the police department in August 1992 as a dispatcher.

All of his prior experiences came into play in his new job.

“I can’t help but credit my years as an officer and my combat experience when I was getting shot at” in preparing for the pressures on the dispatch desk, Campbell said. And his eight years with public works gave him additional background knowledge to support village residents and work crews with all kinds of problems.

“Larry had a variety of jobs and did well in all of them,” Bristol said.

You never know what’s going to be the situation on the other end of the phone, Campbell said. Callers are often upset and even confused.
“You have to do your best to calm people down so you can get the information you need.”

That information may be distressing for the dispatcher as well, but one’s personal feelings can’t get in the way.

“You can cry about it later,” he said, “but when a call comes in, you’ve got to handle it.”

As a dispatcher, “I’m the first contact,” he said. “If I don’t know what to do, then I won’t be able to help. That’s why everyone up there is special.”

But Campbell didn’t just wait for the phone to ring, either. He took a more proactive approach to his job. “I didn’t have a cruiser, but I had a phone. I called village seniors, just to check on them. I would keep an ear out for recently widowed in town.”

It’s the personal relationships and local knowledge that make keeping the dispatch center a Village service so vital, said Campbell, who was a vocal opponent to a recent push to have the county handle Yellow Springs police calls. “Thank goodness we had a council that listened to the people.”

After so many years witnessing some of the worst that people can do, Campbell maintains an enduring affection for the village and its residents.

“I love this town,” he said. “The areas of town that have more problems are where people are new to Yellow Springs. They bring their problems with them — or their problems follow them.” He also noted that while Antioch College students have shouldered blame over the years for a variety of misbehaviors, most issues were “not what they did, but what they attracted.” People come to town dressed as hippies, and then others come to town and say, “Look at the hippies.” They’re not Yellow Springs, he said.

His love for Yellow Springs, and the deep regard he has for his colleagues, made taking retirement a difficult decision, he said. “When you hang your hat in the same place for nearly 45 years, you don’t let go that easily.”

So, after nearly 45 years, what was the most satisfying aspect of his village service? “Helping people. That by far was the most satisfying.”
Campbell’s bent for service hasn’t stopped with his retirement. “I’m busier now than I ever was as a dispatcher,” he said. He holds leadership roles in a number of area veterans groups, and he’s also a member of the Masons. What’s more, he and his wife, Sandra, have 14 grandchildren.

Reception for Retirees
A public reception honoring Larry Campbell, who recently retired after 45 years, and Kelley Fox, who is retiring from Village employment after 30 years, will take place Friday, Jan. 31, from 2 to 4 p.m. at Bryan Community Center.