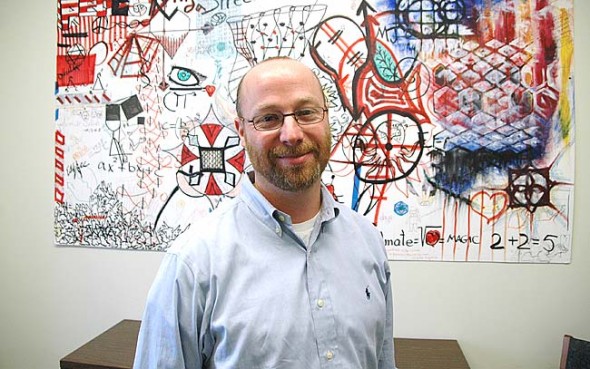 This month Dan Doron, of Columbus, joined Antioch College as its new director of communications. Doron has worked at several newspapers, the PR department of the Cleveland Clinic and Yale University, and he hopes to improve communication with the local community and the college’s neighbors. Here Doron stands before a piece of student artwork he found to adorn his walls. (Photo by Megan Bachman)

A new face to tell the Antioch College story

When a Dayton Daily News videographer focused his camera last week on Todd Sanders, an Antioch College student, Sanders spoke eloquently about a college drive organized to send potable water to West Virginians whose drinking water was recently contaminated by a chemical spill.

“This is very much in the spirit of why I came here,” said Sanders, a first-year student.

Meanwhile, new Antioch Director of Communications Dan Doron was beaming. In his first few weeks on the job, Doron has been impressed with the quality of students at Antioch, whom he plans to help with media training. Sanders, however, didn’t need much help that day.

“I’ve been here less than two weeks and I think this place is fantastic,” Doron said. “The students are self-motivated, they want to make the world a better place and I just want to help them.”

Earlier this month, Doron replaced Mark Blackmon as the head of the Antioch communications department, who was only on the job for a few months. Former communications director Gariot Louima, who came to Antioch soon after its 2009 revival, left over the summer.

Doron said he sees his role as helping students, faculty and the administration to get the word out about what they’re doing.

“They want to accomplish things and I want to help them,” Doron said. Doron helped coach Sanders to face the camera and also assisted recently when a faculty member invited a Dayton psychologist to give a talk on “The New Neuroscience of Mind Control.”

Doron also plans to create a central channel for sharing information about campus events and he looks forward to reaching prospective students and their parents with the benefits of an Antioch education.

“This school does things that no one else does,” Doron said. “The real difference is, for parents, you want your child to get a good education and while you want them to become a better person and to change the world, you also want to justify the money you spend on college — you want them to have the skills to get a job.”

Doron is a Columbus native who still resides there with his wife, Jennifer, and their two young children, though he lives on the Antioch campus during the week. But Doron, 41, also has lived all over the country, and he comes to Antioch with an eclectic background in writing and media.

Doron, who got his bachelor’s degree in English writing from Otterbein College outside Columbus, has been a reporter and editor at Columbus Suburban News Publications, the New Haven (Conn.) Register and the San Francisco Independent. He worked in the Yale University development office, an Internet startup that bought and sold textbooks to college students, a financial publishing company, and the Cleveland Clinic public and media relations department. He was also a speechwriter for the City of Chicago and had his own communications consulting firm.

Though Doron has worked for for-profit companies, he gets the most satisfaction in helping nonprofits and educational and healthcare institutions to fulfill their missions, he said. He applied for the position at Antioch because he said he “loves a challenge,” and bringing the college back from closure sounded like a big one. But amidst the challenges, the college has a unique opportunity to leverage its history while changing to meet the needs of the 21st century, Doron said.

“If you’re starting anew you can see what was great about it and make it work for today,” Doron said. “Some of these kids on campus are phenomenal and they might not have come here in 2006.”

Better communication with the Yellow Springs community and the college’s neighbors is also a Doron goal. As a member of the newly formed Golf Course Advisory Committee, Doron pledged to local neighbors at a recent meeting that the college will do a better job of communicating its plans and listening to neighbor concerns.

“It sounds like there were communication issues and that the majority of [the problem] was coming from the college,” Doron said. He also feels strongly that Yellow Springs has a stake in Antioch’s success.

“We are neighbors and community members together; we have to start working together,” Doron said. “Antioch is here, they’re not going anywhere. Let’s work together to make them both as prosperous as possible. … A financially stable and successful Antioch College is only good for Yellow Springs.”