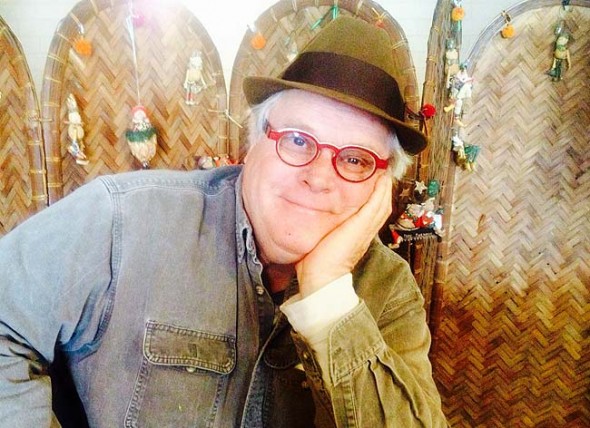 Folk singer Bob Lucas, of Zanesfield, performs at 7 p.m. on Saturday, Feb. 22, at the Mills Lawn auditorium for the Mills Lawn PTO Family Fun Night, an annual event to lighten the dreary winter months. Lucas is a professional musician with roots in the 1960s folk revival whose songs have been recorded by Alison Krauss, New Grass Revival and Sam Bush. (Submitted photo)

It has been 20 years since Pete Seeger last performed in Yellow Springs, but this weekend 64-year-old folk singer Bob Lucas will introduce a younger generation to the folk tradition — and he may even play a few of Seeger’s songs.

In fact, Seeger, the recently deceased folk music icon who played regularly in Yellow Springs from the 1950s to the early 1980s, may have even performed on the same stage at Mills Lawn that Lucas will take this weekend.

Lucas will perform at 7 p.m. on Saturday, Feb. 22, in the Mills Lawn auditorium for the Mills Lawn PTO Family Fun Night, an annual event to lighten the dreary winter months. The fundraiser costs $5 per person and $10 for families.

Lucas was just a few years older than Mills Lawn students when he hit the road as part of a teen folk band called the Youngins in the mid-1960s, playing East Coast festivals at the height of the folk music revival.

“It came just before the Summer of Love,” Lucas recalled of his entrée into the folk scene. “Folk became huge and I just loved it. It was rather unscripted and beautiful and it was also talking about things that I felt were important and contemporary, such as civil rights, anti-war, people getting along with one another.”

Since then, Lucas has been a professional musician and songwriter whose songs have been recorded by Alison Krauss, New Grass Revival, Sam Bush and Kathy Chiavola. Lucas also formed the 1970s folk group Eclectricity and toured internationally with the Austrian-American actor and folk singer Theodore Bikel. He now lives in Zanesfield in Logan County, Ohio, and is the artistic director for Mad River Theater Works, where he is also a composer, songwriter in residence and actor. At Mad River he has written music for and performed in 25 original plays.

While the popularity of folk music has waned in recent decades, Lucas said he believes that the genre is more relevant now than ever.

“I really believe that what we call popular music today is really folk music dressed up in different clothes,” Lucas explained, as it leans on folk structures like verse/chorus and musical scales.

Meanwhile, folk instruments such as banjo, fiddle, guitar and pocket instruments can enchant children who are so “tech-oriented that they think entertainment comes out of a box that you push a button on,” Lucas said.

It was that magical element of live performance that inspired Mills Lawn PTO member Jennifer Berman, a Family Fun Night organizer, to invite Lucas. Berman, who met Lucas in the 1970s while she was working for the Chicago record label that put out an Eclectricity album, prefers live entertainment, which can delight children.

“There’s so much great talent around here and why rely on some canned thing, when students can be exposed to something live and beautiful,” Berman said.

Berman said that Lucas’ music will entertain children and adults and will likely include traditional folks songs, along with his powerful original material.

“He writes songs that seem to have always existed — that don’t even seem like they were written,” Berman said. “He has a great stage presence, he is very funny and he has a big range of material.”

Lucas said his songs are mostly about “life — everything that is out there,” but that he also believes in the role of folk music in activism, “things like changing the world, and trying to make the world a better place.”

“Music has power and songs can provide the backbone for entire movements,” Lucas said. He’ll bring along his guitar, banjo, and fiddle and maybe throw in a jaw harp and hambone, he said.

Lucas, who performed solo a few years ago at the Yellow Springs Community Library and as part of Mad River Theater Works’ local production of “Rosa Parks” last year, is thrilled to return to the village, he said.

“I love that school, and I love Jen, and I love Yellow Springs,” Lucas said. “I feel a real simpatico towards the town and the people, and I am really looking forward to being with them.”