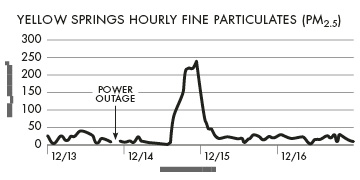 Particulate pollution levels monitored— Cause of spike is unknown

A regional air pollution agency is investigating an unprecedented and potentially dangerous spike in air pollution in Yellow Springs in December when an exceedingly high concentration of lung-penetrating particles was recorded.

Air pollution monitors atop the John Bryan Community Center measured levels of the fine particulate PM2.5 at 240.5 millionths of a gram per cubic meter of air (μg/m3) on Saturday, Dec. 14, more than 20 times higher than the local average.

According to John Paul, administrator of the Dayton-area Regional Air Pollution Control Agency, that level is the highest concentration the agency has ever seen. The agency is now looking into the cause.

“This is something that caught our eye and we said ‘boy,’” Paul said this week, adding that fine particulates are the pollutant of most concern for the agency since they can “penetrate deeply into the lungs and stay there.”

Fine particulates are an inhalable mixture of solid particles and liquids emitted as dust and soot from power plants, industries, automobiles, smokestacks and fires. Breathing in fine particulates even for just a few hours or days can cause serious health effects, including premature death, heart attack, strokes and respiratory symptoms like difficulty breathing, according to the U.S. Environmental Protection Agency, which regulates particulate pollution.

Once it secures funding and a university partner for the study, RAPCA plans to look at possible local causes for the spike, such as residential wood burning and large upwind emitters, including the Cemex cement production plant and Wright-Patterson Air Force Base, both in Fairborn.

On Dec. 14, measures of the pollutant PM2.5 departed from a normal local level of 10 μg/m3 starting at around 3 p.m. and lasted for 12 hours. Yellow Springs’ 24-hour average of 71.7 μg/m3 triggered the rare EPA air quality index designation “Unhealthy,” which is the fourth highest after “Good,” “Moderate,” and “Unhealthy for Sensitive Groups,” according to RAPCA air pollution analyst Andy Roth. Only “Very Unhealthy” and “Hazardous” are higher.

“It a very rare occurrence to hit ‘Unhealthy.’ It’s been some years,’” Roth wrote in an email this week, adding that the level “Unhealthy for Sensitive Groups” occurs about 12 times per year in the six-county area that RAPCA oversees. The Air Quality Index hit 155 on the day of the spike.

When local air quality reaches “Unhealthy,” it is no longer just unsafe for sensitive populations such as the elderly, children and those with respiratory or heart disease to be outdoors, according to the EPA. At that level, everyone is at risk and should limit “prolonged exertion,” because during physical activity particulates are inhaled more deeply into the lungs.

According to the American Lung Association’s 2013 “State of the Air” report, even short-term exposure to fine particulates can kill.

“Deaths can occur on the very day that particle levels are high, or within one to two months afterward,” according to the report. Short-term increases in particle pollution have been linked to increased mortality in infants and young children, increased heart attacks, increased hospitalization and emergency room visits for cardiovascular disease and strokes and increased severity of asthma attacks in children, the report said.

PM2.5 particulates, which are less than 2.5 microns in diameter or 1/30th the width of a single human hair, are particularly dangerous because they are small enough to enter the bloodstream and stay there, according to the EPA. Larger particulates, known as PM10, can be expelled from the lungs by sneezing or coughing.

The particulate pollution spike did not violate EPA regulations and appears to be an anomaly, as Yellow Springs is not known to have poor air quality, according to Paul. In addition, the agency, which releases a daily air quality index forecast for the area and occasional air quality alerts, did not issue an alert because by the time the spike was noticed, the event was over, Paul said.

The EPA has a 24-hour standard of 35μg/m3 that is based upon annual peak pollution days averaged over three years. Alone, the 24-hour measure on Dec. 14 of 71.7 μg/m3 would not have been enough to trigger a violation. Yellow Springs’ 24-hour 98th percentile level in 2012 was 20.2 μg/m3, according to an Ohio EPA report. The village also was below the EPA’s annual standard of 12 μg/m3 (an average of hourly measures over the year) with a an average of 9.58 μg/m3. Final figures from 2013 have yet to be released by the Ohio EPA.

To determine the cause of the air pollution spike, Paul said that RAPCA will first need to understand local weather conditions at the time, which can have a major impact on air quality. In fact, a rare meteorological event called an “ice fog” settled into the area on the evening of Dec. 14, which could have contributed to the high measures of pollution, Paul said.

RAPCA has also mostly ruled out area fires as a cause. According to Miami Township Fire-Rescue Chief Colin Altman this week, there were no local house fires or burn permits issued for that day.

To see if residential wood burning contributed to high particulate counts, Paul said the agency needs to review particulate data in the village over the last few years, compare measurements from summer and winter, chart weather patterns with the data and take samples from another local EPA monitor that is equipped with a filter. (The continuous 24-hour PM2.5 monitor that measured the spike does not save physical samples). If wood burning turns out to be the culprit, RAPCA would then encourage people to be sure to burn only clean, dry wood and regularly clean their wood stove or chimney, Paul said.

“We would point out the levels are still within the healthy range, but if you are outside and you do smell wood smoke, and if you have children that have asthma, you should avoid exposing yourself to that,” he said.

RAPCA will also investigate a potential incident at the Cemex cement production plant off of Dayton-Yellow Springs in Fairborn by looking at the data from its pollution monitors, though Paul said he believes that is unlikely the cause since the plant is located so far away.

According to a statement this week from Cemex’s corporate offices in Houston, Texas, the Fairborn plant, which continuously monitors its emissions in compliance with EPA regulations, reviewed its data for the months of November and December and reported “no exceedences.”

Wright-Patterson Air Force Base, also in Fairborn, is another major upwind pollution source for Yellow Springs and will be examined, Paul said. According to Paul, the base is the largest polluter in the county as it burns coal to generate electricity at the base.

Two other events that may have contributed to the air pollution spike were a village-wide power failure on Friday, Dec. 13, that lasted from 8 to 11 p.m. and an accident on Interstate 70 on Friday evening that caused traffic to be re-routed through the village. Increased traffic, especially of diesel-burning semi-trucks, could increase PM2.5, according to Roth. However, because the spike occured 16 hours after these events, they may not be related, Roth wrote. Paul agreed.

“It’s doubtful [they had an impact] unless diesel trucks were lined up for six hours,” Paul said. “A few hours of heavy but otherwise normal traffic is unlikely to have caused this.”

The possibility that the monitors malfunctioned is also being explored, according to Paul. Erroneous readings have happened before, though RAPCA has not yet been able to invalidate the Yellow Springs data.

As part of its investigation RAPCA will also look into another local PM2.5 spike to 234.5 μg/m3 that lasted just a few hours on Nov. 1.