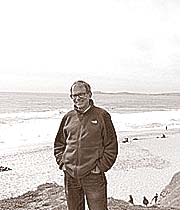 A man of medical science and the literary arts, Patrick S. Gentile, M.D., age 67, died of natural causes at his home in Wilmington, Ohio, on Tuesday, February 11, 2014. He is survived by his wife, Laura Curliss, and son, Michael Gentile, who also reside in Yellow Springs, Ohio, and brother Eddie Gentile of Brooklyn, New York.

Born October 29, 1946, in Brooklyn to parents Mildred Mendola and Mariano Gentile, Pat grew up in an apartment in Canarsie, NY, with his brother, uncle Salvatore Mendola, and grandfather. Pat loved learning from a young age and called his public grade school “the best school he attended.” He and his brother enjoyed the music, film, theater and books. In his teens, Pat frequented the coffee houses of New York, including having the opportunity to listen to Bob Dylan play live.

Pat graduated from Fordham University, B.S. and received his medical degree from the University of Guadalajara, Mexico. He chose an academic life and completed his medical training at Jewish Hospital of Brooklyn, a Hematology Fellowship at Mt. Sinai School of Medicine (NY) an Oncology Fellowship at Memorial Sloan Kettering Cancer Center (NY) and a Research Fellowship in Hematopoiesis, also at Memorial Sloan Kettering Cancer Center. Upon completion of his fellowships, he accepted an academic position as an Assistant/Associate Professor of Medicine at the University of Louisville School of Medicine (1982-1990) and later in his career entered private practice in hematology-oncology. He moved to southwest Ohio with his family in 2002 and worked for Clinton Memorial Hospital in Wilmington and in 2004 became the Medical Director and CEO of Community Care Hospice, Wilmington, Ohio. Community Care Hospice services patients and families in a five county area, including Friends Care in Yellow Springs.

Pat was a reader and patron of the local libraries and bookstores. He counted among his friends many writers and poets in Wilmington and Yellow Springs, all of whom he appreciated for sharing their creative efforts and conversation with him. Pat dedicated a few hours every day to reading and writing. He was a free thinker and his politics always embraced the suffering in this world. He found joy and solace in walking, with family and with the family dog, Neo. He met his future wife in Indianapolis and they enjoyed outings with the hiking club there. He also enjoyed spending time with his son hiking in Glen Helen and walking his favorite trail in Wilmington, the Luther Warren Peace Path.

He was a man of the arts, of healing and comfort for the sick, of spiritual seeking and of peace. His compassion seemed boundless. He was a loving father and husband and he will very much be missed by his family and friends.