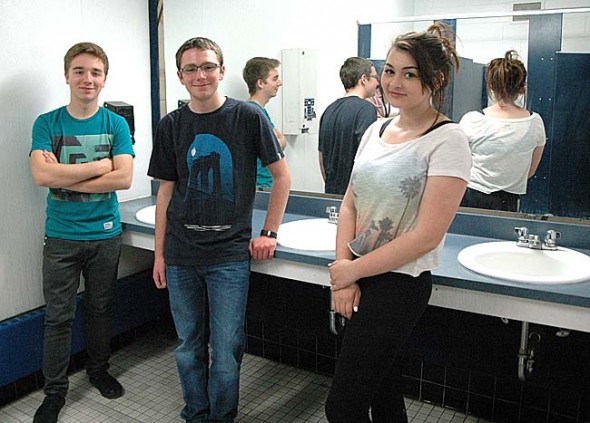 Fixing the fixtures at YSHS

Yellow Springs High School freshman Lorien Chavez happened to be in the girls bathroom at the high school last year when some cheerleaders from another school walked in. Not realizing she was there, they began commenting on how gross and unkempt the school’s main bathroom was.
“When I came out of the stall I looked at them and was like, “oh, I know, we don’t like it either,’” Chavez said. “I was really embarrassed.”

Restrooms aren’t the first areas that come to mind when one thinks of evaluating the comfort and aesthetics of a place. But at the high school, the main girls and boys restrooms across from the prinicpal’s office, the cafeteria and the gym, are two of the most public spaces in the building. And according to the kids, they’re filthy. They’re smelly. They’re ugly. They’re old. And they need fixed.

So the opportunity to do something about a problem the students have known about since they got to McKinney Middle School was not lost on them when Principal Tim Krier asked for their input this past winter. The YSHS Student Review Board, the high school’s student government organization, grabbed the project and ran with it.

Members Mollye Malone, Cole McNeal-Harding, Lake Miller, David Butcher and Chavez got to work investigating what existed, what kinds of improvements were necessary, and what changes were desirable. With the help of art teacher Elizabeth Simon, they interviewed students and teachers and made a video illustrating the state of the school restrooms, public opinion about them, and ways the school and wider community could make them better.

Currently, the restrooms each consist of three sinks and several stalls, plus several urinals in the boys room, all of which have been in place for at least 20 years, with only minor repairs and little regard to aesthetics. There is carpet on the walls, exposed electrical wire, holes in the concrete and unpainted walls where repairs were made and were never repainted. And in the boys bathroom, which includes oversized, leaky urinals, it hurts just to breathe.

The problems aren’t a function of hygiene, but rather a result of aging equipment, the students say. And rather than replacing things piecemeal, they were ready for an overhaul. And once they got that far, they thought why not try to make them beautiful too? Art by the students who would be using the bathrooms made perfect sense.

To get a sense of the costs, they began investigating commodes and found that two sets of those alone added up to several thousand dollars. Factoring in new sinks, stalls, flooring, paint and mirrors instantly brought the total way beyond the $3,000 the school had budgeted for restroom repair.

So they came up with a plan to break their project down into first-, second- and third-tier needs, and decided to start a fundraising campaign to raise at least $3,000 through Kickstarter, an online fundraising platform. Visit their page at kickstarter.com and search for “Yellow Springs High School Restroom Transformation.”

The site, which went live on Monday and includes the video by the Student Review Board, has already attracted nine backers, who have pledged a total of $185. Because of Kickstarter’s rules, the team must raise all $3,000 by May 19 in order to receive any of the money. But if they receive more than their goal, they get to keep it. Each pledge level of $5 or more comes with a prize, such as a “Fearless Thinkers” pen and personalized note from the Student Review Board, a print of a Yellow Springs student’s artwork, or the donor’s name or company logo around the restroom.
After seeing the Review Board’s video at a recent school board meeting, District Superintendent Mario Basora promised to fund the project up to $10,000, including the $3,000 already budgeted from the school and whatever comes from the Kickstarter campaign.

The Student Review Board has started to collect a pile of design ideas submitted by fellow students, and soon they will choose the winning artwork for the walls and doors of their restrooms. They also hope to receive community support in the form of donated supplies and possibly in-kind labor from contractors and parents. They hope to have the school bid the work at the end of the school year and help with construction over the summer, aiming to complete the renovation in time for the new school year.

And if, by chance, there happens to be more money pledged than the students need for the two main restrooms, they counted six more on the ground floor of the school that could use a similar level of repair.

While the Review Board’s activity isn’t exactly a project-based learning activity, and none of the members is receiving course credit for their involvement, member Lake Miller thinks it fits squarely in the PBL model that the entire district is trying to incorporate into all of its classes.

“This is not a school project, but we’ve each put about 30 hours into it, and this is such a shining jewel for PBL learning,” he said. “This project includes marketing, video making, construction, art…this is truly what PBL can be.”