Recent shifts in Antioch College leadership aim to build on the college’s strengths and distinctiveness, as well as pivot to a new stage of growth, according to College President Mark Roosevelt in recent interviews. The changes include a new focus on global studies, the hiring of a new academic leader, the loss of a key fundraiser and a re-arrangement at the top levels of college leadership.

“The real effort is to integrate what we have, to put together the strengths we have in a way that’s compelling,” Roosevelt said this week.

For instance, since its reopening, the college has offered individual pieces of a global studies program, but until now the pieces have not cohered into a whole, Roosevelt said. Recently, former vice president for academic affairs Hassan Rahmanian began bringing these pieces together in his new role as leader of the college’s global learning initiatives.

Several factors led to the emphasis on global studies, Roosevelt said, including intense student interest and the success of the college’s language acquisition courses. And the reborn college found itself with a faculty that is rich in global experience. Currently, the college has 35 faculty members, and a significant number either came from, or have lived in such countries as Argentina, Brazil, Greece, Japan, Mexico, Belgium, Indonesia and Jamaica, among others.

“For a small faculty, we have an important reservoir of languages and cultures here,” Rahmanian said, stating that this particular strength of the college is underutilized. “It’s a great resource.”

And Rahmanian, who came to this country from Iran as a graduate student, has a lifelong passion for helping students engage with the wider world.

“I love it. This change brings me new energy,” Rahmanian said.

A member of the Antioch College faculty from 1986 until the college closed in 2008, Rahmanian was named vice president of academic affairs after the college re-opened, and as such oversaw the development of the new college’s curriculum. But the need for that initial push has passed, according to Rahmanian, and since he’s never felt fully comfortable as an administrator, he’s ready to pursue his passion for global studies.

“This opens up an ocean of new possibilities,” Rahmanian said.

Among the possibilities are developing a major in global studies in which a student would spend semesters at universities in two different countries, along with beefing up the “global” part of the college’s global learning seminars. Rahmanian also plans to work closely with a new consortium of 16 international liberal arts colleges, through the Great Lakes College Association, or GLCA, to develop collaborative courses. 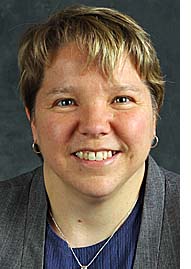 Antioch College this week announced that Lori Collins-Hall is the new vice-president of academic affairs. She plans to start her job in July. (Submitted photo)

Taking Rahmanian’s place as vice president for academic affairs will be Lori Collins-Hall, currently professor of sociology and the chair of the sociology department at Hartwick College in Oneonta, N.Y., Roosevelt announced this week.

Collins-Hall brings with her a “trifecta of skill sets” that is uniquely suited to what the college needs at this stage in its growth, according to Roosevelt. Those skill sets include significant experience with student assessment, especially assessment of experiential learning; expertise in the accreditation process; and a deep connection with experiential learning, Roosevelt said.

The college also seeks an academic leader who can ease the administrative burden currently borne by faculty, who are “tired and overworked,” Roosevelt said, but not overworked by their teaching. Rather, due to the college’s start-up nature, faculty members have been called on to develop policies and procedures, a sometimes overwhelming job on top of a teaching load.

“Our hope is that Lori can help the faculty organize around these administrative tasks that have been burdensome to them,” Roosevelt said.

All in all, he is impressed with Collins-Hall’s level of energy and willingness to take the challenge, Roosevelt said.

In an interview this week, Collins-Hall said she’s excited to start her new job.

“I think Antioch and I are a really good match,” she said, describing herself as, “passionate about liberal arts colleges and passionate about experiential learning. It was a key criterion for me to feel that I have something substantial to contribute on day one.”

Collins-Hall said her new job begins on July 21 and she plans to live in Yellow Springs.

Finding the right people to work at the college isn’t a simple thing, according to Roosevelt, responding to the recent loss of several key staff members. Because the college doesn’t have the time or financial resources to use consultants, he personally conducts the searches for key positions, often relying on help from Rick Detweiler, the head of the GLCA.

In the past several weeks, two recently-hired college leaders have left Antioch. In both cases, according to Roosevelt, the people hired “were not a good fit and we reached mutually acceptable resolution.”

In a recent press release, the college announed that Vice-President for Advancement Brian Williams, who has been on the job less than a year, will leave Antioch mid-May to join the Associated Colleges of the Midwest, where he will be vice president and director of faculty development and grant programs.

“That job is our toughest job,” Roosevelt of the advancement position, stating that it requires both traditional and nontraditional fundraising strategies.

While the press release describes the loss of Williams as “disappointing,” it states that the change allows the college to streamline its fundraising and communication efforts. A new position which includes all these responsibilites, the vice president for external relations, will be filled by Jennifer Jolls, the current director of institutional effectiveness. While Jolls will oversee the overall fundraising efforts, a new advancement professional will be hired to head the fundraising team, Roosevelt said.

With the college since 2011, Jolls came to Antioch as assistant director of communications. Since then, her responsibilities have increased to include overseeing the college’s efforts to regain accreditation. An accreditation team from the North Central Association, the accrediting agency, visited the college last fall to determine if Antioch will be approved as an official candidate for accreditation, the next step in the multi-year process. While Roosevelt received an initial report from the accreditation team last winter, he is not allowed to discuss it, although he said, “We have no reason to be discouraged.”

The college will hear whether it is approved for candidacy in early summer.

Jolls’ efforts toward the accreditation work shined a light on her impressive work ethic and strengths in organization and strategic thinking.

“She’s a superstar,” Roosevelt said. “She’s done an awesome job. And at Antioch, that means you get a bigger challenge.”