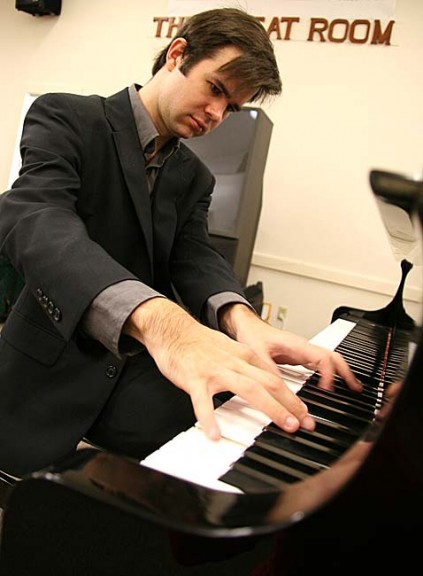 Pianist Sam Reich has this year performed six fundraising concerts for the Yellow Springs Senior Center, where he practices each morning. He and Martin Bakari will perform another benefit concert on Aug. 10. (photo by Suzanne Szempruch)

Pianist Sam Reich— Loving to practice as much as play

Yellow Springs-based pianist Sam Reich is at a place in his life and career where he’s often asked about his plans.

Having completed a master’s degree in 2012 from the prestigious Eastman School of Music, where he also earned a bachelor’s in piano performance, Reich says a typical path would involve next pursuing a doctorate, as many of his former classmates are doing. And while he hasn’t ruled out that possibility for himself, he says he’s happy with what he’s doing now — practicing and performing as much as time allows.

“I love my job,” he says. “Everyone asks what my five-year plan is. I don’t really have one. Right now, I get to play all the music I want to play.”

And play he does. In addition to playing each Sunday for the Unitarian Fellowship at Goes Station, his calendar is full of performance opportunities. He also does some private teaching. “It’s really easy to make music here,” he said.

Reich, who was born in Springfield, went to high school at Interlochen Center for the Arts in Michigan, where he graduated in 2003. While his mother lived in Dayton, his father moved to Yellow Springs when Sam was a teenager. After an initial semester at Indiana University, Reich transferred to Eastman, in Rochester, N.Y.

“Having spent 10 years on Main Street in Rochester, living someplace quiet is really nice,” he said of his return to Yellow Springs. “I loved Rochester, but I kind of missed Ohio.”

He said the village has been nothing but welcoming and supportive of his efforts as a musician. Part of those efforts have included mounting a series of benefit concerts at the Senior Center, where he also can be found early every morning practicing on the center’s grand piano.

“I think we’ve done six concerts here in the past year,” he said, taking a short break during a recent practice session. “I try to bring in a wide variety of people to play here.”

The performers are often friends from music school. The concerts have featured violinists, a vocalist, a cellist and a flute player. He’s also performed “a couple of solo recitals.”

Reich’s more immediate plans include accompanying a lunchtime tuba recital this week at the downtown center. “I do a lot of weird gigs,” he said with a chuckle.

He’s also preparing to travel to Greece in early July to perform as part of Ritsos Project ‘14, overseen by a former classmate at Eastman. He said the focus of the week-long music festival, which will take place in Athens and on the Island of Samos, is new pieces based on the works of the Greek poet Ritsos and written by mostly young composers. Accompanying the festival will be a variety of additional concerts, one of which will feature Reich performing with flute player Emlyn Johnson. He brought Johnson to Yellow Springs for a recital in March. The duo plans to play works by Aaron Copland, Robert Schumann, Clara Schumann and Francis Poulenc.

The opportunity to travel is another perk of his job as a professional musician. “I travel a lot,” he said.

Reich’s life in music began simply. He said he was about six years old when he started taking piano lessons, inspired more by a desire to do what his older sister was doing than anything else. But he discovered that he liked to play, and he liked the part that most others find a challenge — practicing.

“I always loved to practice,” he said. He still loves it, too.

“I guess I do it all the time. People who love practicing have to love a ritualized day. I always really loved this. I get up, go running in the Glen, and then come here (the Senior Center). I used to be a late-night practicer, which now has changed. Now I’m an early morning practicer, which I find I prefer.”

He said he generally practices again in the evening. That’s seven days a week, at least eight hours a day.

“I just want to learn and perform as much as I can.” Sounds like a plan.